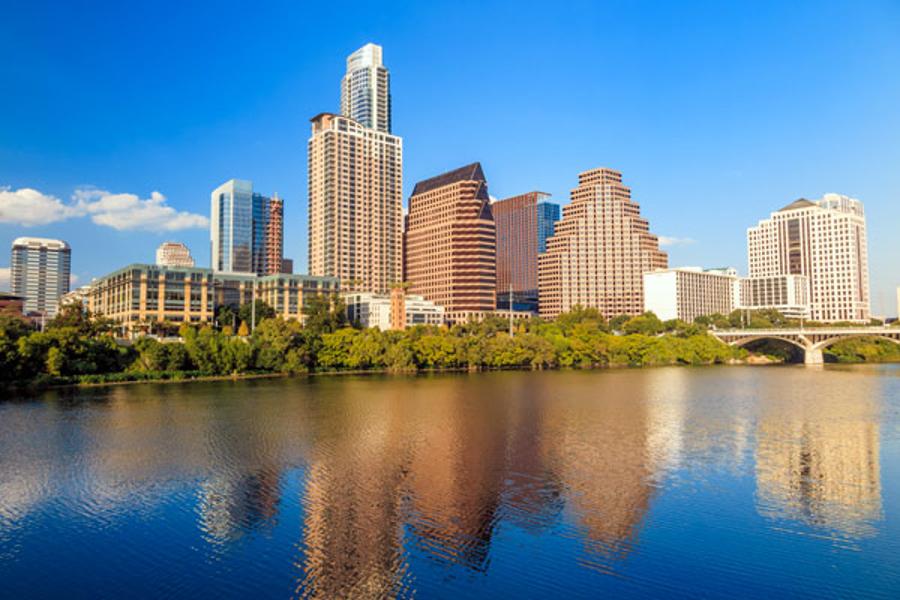 It’s no secret that the Texas economy has been on fire in recent years. Thanks to the unconventional oil boom, last year the state’s oil output reached levels not seen since 1976. That sparked a surge in new home construction and a simultaneous run-up in housing costs in many metro areas.

Unfortunately, the local economies haven’t kept pace with housing price growth. The gross metro product for Austin grew at a 24% clip from February 2011 to the end of last year—healthy, yes, but below the 34% appreciation in home prices over that span (median sales price, March 2015: $250,000, according to CoreLogic). Houston is an even more dramatic case: while gross metro product grew by 23% from Feb. 2011 to the end of last year, housing prices shot up 43% (median price, March 2015: $223,250). With the great oil slump of 2015 causing the energy industry to hemorrhage jobs, as my colleague Chris Helman has reported, the disparity between economic growth and housing costs isn’t likely to get better in these Texas cities any time soon. But don’t call Texas a bubble state.

“The issue isn’t that their prices are in a bubble, it’s just that prices grew faster than fundamentals,” explains Stefan Hilts, a director at Fitch Rating’s U.S. RMBS group. “That’s why we’re worried about these markets.” Housing prices in these Texas cities are unlikely to go down, as might be expected with a bubble correction, notes Hilts. Rather, price growth is likely to stagnate as the roaring economies slow. Austin metro homes (inside the Austin-Round Rock-San Marcos, TX metro) are currently overvalued by about 19%, Houston (Houston-Sugar Land-Baytown, TX) houses by 18%, according to Fitch. Those numbers land Austin (No. 1) and Houston (No. 2) the dubious honor of topping our 2015 list of America’s Most Overvalued Housing Markets.

Fitch compiled a list for FORBES of the five most overvalued and undervalued housing markets in the country based on its most recent quarterly Sustainable Home Price model, which weighs home price trends against the economic fundamentals of the local market, including income growth, unemployment rates, population growth, mortgage rates, rental prices, buyer demand and inventory levels. When home prices grow faster than the rest of the local economy, housing is becoming overvalued. When homes are trading for prices lower than the local economy can sustain, housing is undervalued. Fitch looked at the country’s 50 largest metropolitan statistical areas, all of which have populations of at least 1.4 million (MSAs are urban regions delineated by the U.S. Office of Management and Budget that encompass a core city and its surrounding suburbs).

While all five of the Most Overvalued Housing Markets have seen home prices grow faster than the local economies, the underlying reasons fall into two widely divergent trends. In the Austin and Houston metro areas, native demand has simply driven up prices faster than economic growth. In the other three top markets, low building rates and underwater mortgages have held back supply, so that small changes in demand have had a magnified impact on prices.

Take the case of Texas. Unlike most of the country, the Lone Star State did not experience a dramatic drop in housing prices during the economic downturn and housing crash. The state’s unemployment rate was lower, its economic growth stronger, and as the rest of the nation was still stuck in the doldrums, Texas began to grow. Texas did not experience a flood of investors snapping up distressed properties and pushing up prices–there weren’t super-undervalued properties available to buy. Its price escalation has come largely from the demand that accompanies a strong economy. It’s just been a bit faster than underlying fundamentals.

Riverside, Calif., however, follows the other trend, the restricted supply story. Ranking fourth on our Most Overvalued list thanks to prices that Fitch estimates are 17% higher than they should be, the metro area (inland of Los Angeles) experienced a 45% run-up in housing costs from November 2011 to the end of last year (median price Dec. 2014: $265,000, CoreLogic says). During the same time period, the local economy grew by just 10%. Where did all that housing price escalation come from, if the economy wasn’t booming? In a word, investors. “It’s a smaller amount of demand that’s having an outsize impact on prices,” says Hilts. 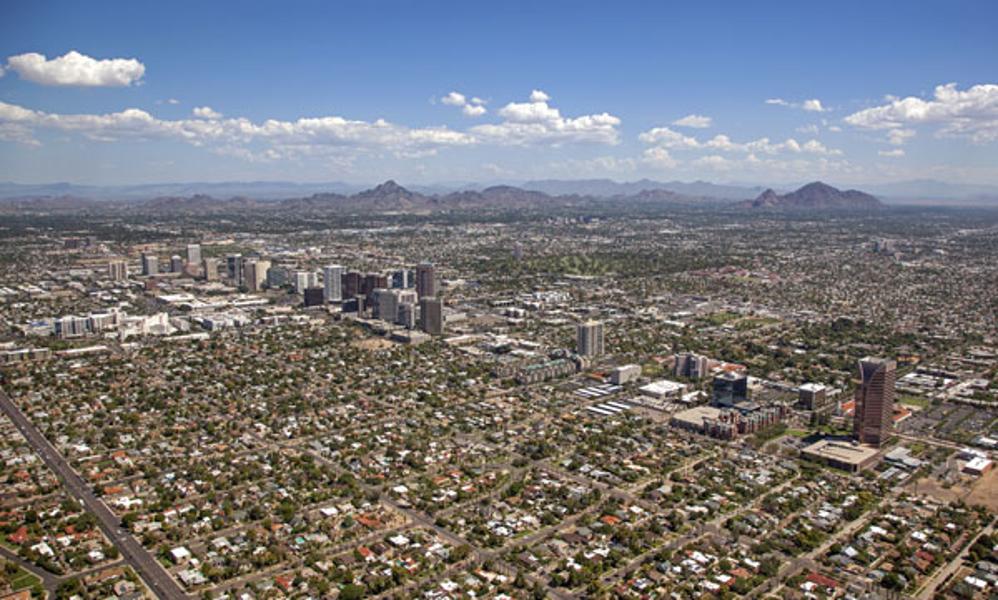 Unlike Texas, Riverside  (Riverside-San Bernardino-Ontario, CA) suffered badly during the crash. Home prices plunged more than 50%, and as of Q1 2012, about 39% of homes were underwater, according to the Irvine, Calif.-based real estate data firm RealtyTrac. Savvy investors couldn’t resist the great deals to be had, and it was largely their activity that helped push prices higher during the recovery. But despite the increase, prices in the Riverside metro are still below their 2006 peak. Construction activity is slow, and about 14% of homes are still underwater, meaning owners who can hold out aren’t putting their properties up for sale yet. Employment, too, is lower than it was back in 2007. “They’ve never really recovered from the downturn,” Hilts says.

Miami (No. 5) is a metro area with a similar tale; homes are overvalued by about 16%, according to Fitch. The Florida city has welcomed a 53% rise in prices since September 2010, its local market bottom (median price, March 2015: $228,900). The local economy has grown just 14% in the same period. Here, as with Riverside, much of the demand for housing has come from investors. And Miami (Miami-Miami Beach-Kendall, FL  metro division) is still in a bit of a slump. The greater metro area had a 48% underwater rate in Q1 2012; Q1 2015′s 23% (per RealtyTrac) is better, but still not great. “There are a lot of guys who are still struggling in those homes they bought back in the 2000′s,” Hilts says. Without a sufficient number of buyers, new home construction is below the long-term average (and the area’s boom in $50 million luxury projects isn’t filling the gap).

Other boom-and-bust cities that have become a bit overheated in terms of prices include Phoenix (No. 3) which, like Houston, is overvalued by about 18%, according to Fitch (median price March 2015: $199,000). It’s the same restricted-supply story: price growth in the Arizona metro (Phoenix-Mesa-Glendale, AZ) has been largely driven by tight supply, with construction slow and many properties still underwater. Again, tight supply means that the impact of outside investors has a magnified impact on prices.

On the opposite end of the spectrum, Detroit, Cleveland, and Providence, R.I., rank as the Most Undervalued Markets in 2015, according to Fitch. Detroit and Cleveland, Rust Belt cities that have suffered population losses in the wake of industrial decline, were in a bad position when the housing crisis hit. The same can be said about Providence, an old manufacturing port town.

“The Northeast and the Midwest regions have consistently ranked in the bottom tier, over the last three to four years,” in terms of investment potential, says Rick Palacios Jr., director of research at Irvine, Calif.-based John Burns Real Estate Consulting. “A big part of that is that job growth has not come back to those markets. When we rank out how the country is doing from a housing perspective, those regions continue to under-perform.”

That’s certainly true in Detroit (Detroit-Livonia-Dearborn, MI  metro division), where housing sales prices bottomed out in March 2011, falling 54%. They’ve since bounced back by 66%, but homes are still undervalued by about 17%, according to Fitch, with prices about 23% off their pre-crisis peaks. The median sales price in April 2011 was $23,000, according to CoreLogic; by February 2015 it had climbed to $45,000. In the intervening years the local economy grew by just 11%. At face value, these dynamics sound similar to those in Houston and Austin, our Most Overvalued Cities–but the underlying story is actually quite distinct. Detroit missed the big price escalation most of the country experienced during the 2000s. So when prices fell hard across the nation, Rock City became one of the most hard-hit spots. In Q1 2012 about 58% of Detroit homes were underwater; by the first quarter of this year that share had shrunk to 24%.

Cleveland and Providence are less dramatic versions of the same story: long-term industrial decline followed by a hard fall in the crash and a slow recovery. Today Fitch rates Cleveland homes (Cleveland-Elyria-Mentor, OH) as undervalued by about 16%. Home prices have risen by about 12% since the bottom in February 2012, while gross metro product has grown 8% in the same time frame. In Q1 2012 about 32% of homes in Cleveland were seriously underwater; as of the first quarter of this year 28% still were.

Providence (Providence-New Bedford-Fall River, RI-MA) saw prices hit bottom in September 2012, and housing price growth since has been just 10% () mpared to an 8% growth in area gross metro product. Providence home prices are undervalued by about 12%, according to the ratings agency.