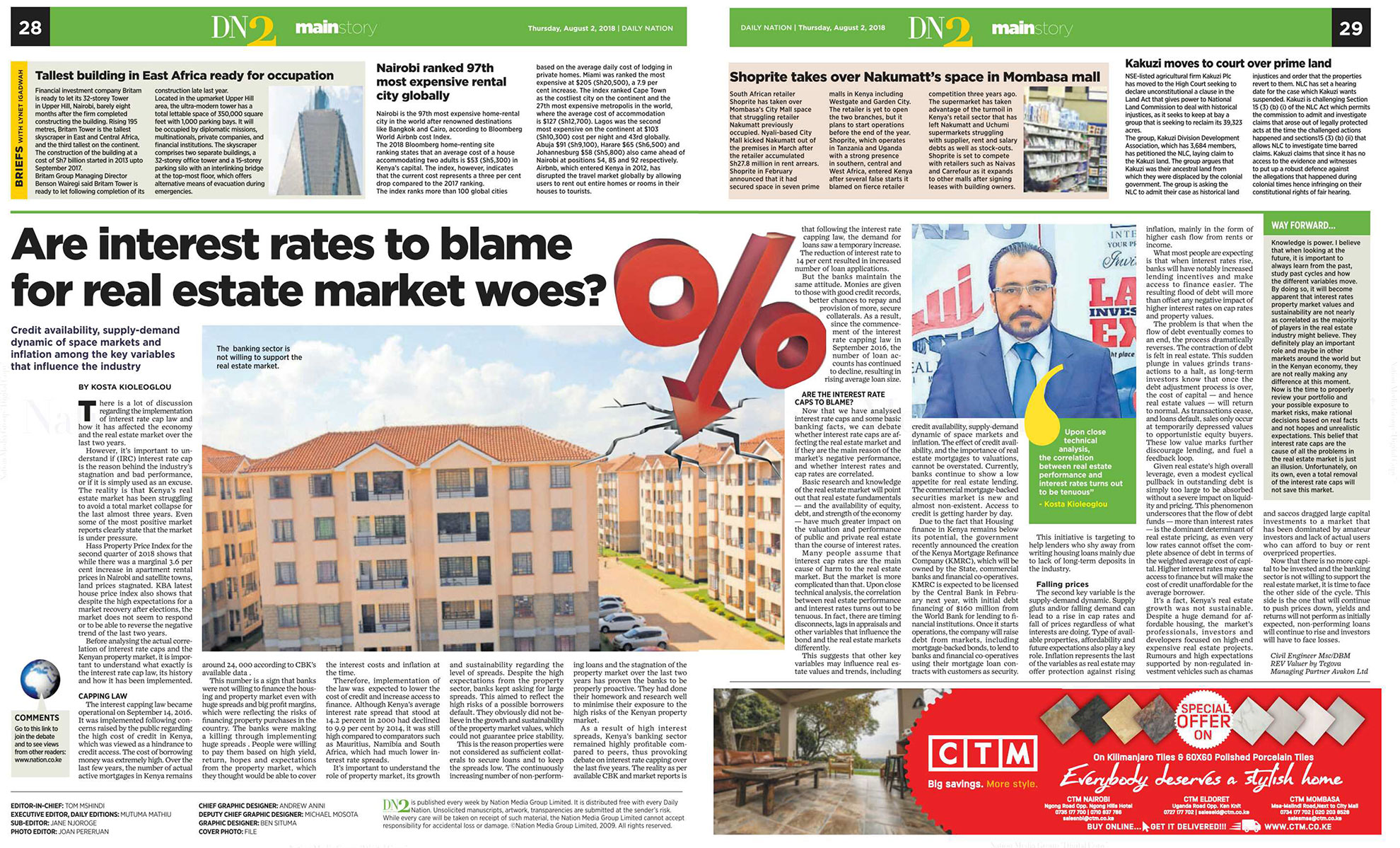 There is a lot of discussion regarding the implementation of interest rate cap law and how it has affected the economy and the real estate market over the last two years.

However, it’s important to understand if (IRC) interest rate cap is the reason behind the industry’s stagnation and bad performance, or if it is simply used as an excuse. The reality is that Kenya’s real estate market has been struggling to avoid a total market collapse for the last almost three years. Even some of the most positive market reports clearly state that the market is under pressure.

Hass Property Price Index for the second quarter of 2018 shows that while there was a marginal 3.6 per cent increase in apartment rental prices in Nairobi and satellite towns, land prices stagnated.

KBA latest house price index also shows that despite the high expectations for a market recovery after elections, the market does not seem to respond or to be able to reverse the negative trend of the last two years.

Before analysing the actual correlation of interest rate caps and the Kenyan property market, it is important to understand what exactly is the interest rate cap law, its history and how it has been implemented.

The interest capping law became operational on September 14, 2016. It was implemented following concerns raised by the public regarding the high cost of credit in Kenya, which was viewed as a hindrance to credit access. The cost of borrowing money was extremely high.

Over the last few years, the number of actual active mortgages in Kenya remains around 24, 000 according to CBK’s available data.

This number is a sign that banks were not willing to finance the housing and property market even with huge spreads and big profit margins, which were reflecting the risks of financing property purchases in the country. The banks were making a killing through implementing huge spreads.

People were willing to pay them based on high yield, return, hopes and expectations from the property market, which they thought would be able to cover the interest costs and inflation at the time.

Therefore, implementation of the law was expected to lower the cost of credit and increase access to finance. Although Kenya’s average interest rate spread that stood at 14.2 percent in 2000 had declined to 9.9 per cent by 2014, it was still high compared to comparators such as Mauritius, Namibia and South Africa, which had much lower interest rate spreads.

Blue Bells Gardens Apartments in in Mlolongo,Machakos County in a picture taken on February 20,2017.PHOTO| FILE

It’s important to understand the role of property market, its growth and sustainability regarding the level of spreads. Despite the high expectations from the property sector, banks kept asking for large spreads.

This aimed to reflect the high risks of a possible borrowers default. They obviously did not believe in the growth and sustainability of the property market values, which could not guarantee price stability.

This is the reason properties were not considered as sufficient collaterals to secure loans and to keep the spreads low. The continuously increasing number of non-performing loans and the stagnation of the property market over the last two years has proven the banks to be properly proactive. They had done their homework and research well to minimise their exposure to the high risks of the Kenyan property market.

As a result of high interest spreads, Kenya’s banking sector remained highly profitable compared to peers, thus provoking debate on interest rate capping over the last five years. The reality as per available CBK and market reports is that following the interest rate capping law, the demand for loans saw a temporary increase.

The reduction of interest rate to 14 per cent resulted in increased number of loan applications.

But the banks maintain the same attitude. Monies are given to those with good credit records, better chances to repay and provision of more, secure collaterals.

As a result, since the commencement of the interest rate capping law in September 2016, the number of loan accounts has continued to decline, resulting in rising average loan size.

Basic research and knowledge of the real estate market will point out that real estate fundamentals — and the availability of equity, debt, and strength of the economy — have much greater impact on the valuation and performance of public and private real estate than the course of interest rates.

Many people assume that interest cap rates are the main cause of harm to the real estate market. But the market is more complicated than that. Upon close technical analysis, the correlation between real estate performance and interest rates turns out to be tenuous. In fact, there are timing disconnects, lags in appraisals and other variables that influence the bond and the real estate markets differently.

Currently, banks continue to show a low appetite for real estate lending. The commercial mortgage-backed securities market is new and almost non-existent. Access to credit is getting harder by day.

Due to the fact that Housing finance in Kenya remains below its potential, the government recently announced the creation of the Kenya Mortgage Refinance Company (KMRC), which will be owned by the State, commercial banks and financial co-operatives. KMRC is expected to be licensed by the Central Bank in February next year, with initial debt financing of $160 million from the World Bank for lending to financial institutions.

Once it starts operations, the company will raise debt from markets, including mortgage-backed bonds, to lend to banks and financial co-operatives using their mortgage loan contracts with customers as security.

This initiative is targeting to help lenders who shy away from writing housing loans mainly due to lack of long-term deposits in the industry.

The second key variable is the supply-demand dynamic. Supply gluts and/or falling demand can lead to a rise in cap rates and fall of prices regardless of what interests are doing.

Type of available properties, affordability and future expectations also play a key role. Inflation represents the last of the variables as real estate may offer protection against rising inflation, mainly in the form of higher cash flow from rents or income.

What most people are expecting is that when interest rates rise, banks will have notably increased lending incentives and make access to finance easier. The resulting flood of debt will more than offset any negative impact of higher interest rates on cap rates and property values.

The problem is that when the flow of debt eventually comes to an end, the process dramatically reverses. The contraction of debt is felt in real estate. This sudden plunge in values grinds transactions to a halt, as long-term investors know that once the debt adjustment process is over, the cost of capital — and hence real estate values — will return to normal.

Given real estate’s high overall leverage, even a modest cyclical pullback in outstanding debt is simply too large to be absorbed without a severe impact on liquidity and pricing.

This phenomenon underscores that the flow of debt funds — more than interest rates — is the dominant determinant of real estate pricing, as even very low rates cannot offset the complete absence of debt in terms of the weighted average cost of capital. Higher interest rates may ease access to finance but will make the cost of credit unaffordable for the average borrower.

It’s a fact, Kenya’s real estate growth was not sustainable. Despite a huge demand for affordable housing, the market’s professionals, investors and developers focused on high-end expensive real estate projects.

Rumours and high expectations supported by non-regulated investment vehicles such as chamas and saccos dragged large capital investments to a market that has been dominated by amateur investors and lack of actual users who can afford to buy or rent overpriced properties.

Now that there is no more capital to be invested and the banking sector is not willing to support the real estate market, it is time to face the other side of the cycle. This side is the one that will continue to push prices down, yields and returns will not perform as initially expected, non-performing loans will continue to rise and investors will have to face losses.

Way forward…
Knowledge is power. I believe that when looking at the future, it is important to always learn from the past, study past cycles and how the different variables move.

By doing so, it will become apparent that interest rates property market values and sustainability are not nearly as correlated as the majority of players in the real estate industry might believe. They definitely play an important role and maybe in other markets around the world but in the Kenyan economy, they are not really making any difference at this moment.

Now is the time to properly review your portfolio and your possible exposure to market risks, make rational decisions based on real facts and not hopes and unrealistic expectations.