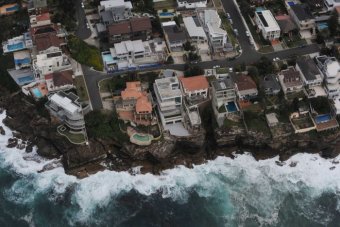 Westpac’s decision to lift interest rates is just one piece of the real estate puzzle, and if history is any guide the east coast housing boom is right on the edge of a bust, writes Ian Verrender.

Having spent almost three years furiously pumping up the east coast residential property market bubble by cutting interest rates to record lows, the Reserve Bank has found itself a pickle; how to limit shockwaves from an impending downturn.

The only option? Further cuts to official interest rates. And soon.

Sydney and Melbourne housing went well beyond “irrational exuberance” more than two years ago when it began vying for the honours of World’s Most Expensive Real Estate.

Looming oversupply, loan restrictions on investors, enforcement of foreign investment rules, slowing population growth and last week’s move by Westpac to lift its mortgage lending rates have begun to bite. And all at once.

It is an impending headache for policymakers; house prices coming off a tear as the broader economy weakens.

It took until June this year for Reserve Bank governor Glenn Stevens to reluctantly admit the obvious.

His strategy of maintaining employment by shifting construction from west coast mining to east coast housing – via a real estate boom – was in danger of running off the rails.

“I am very concerned about Sydney, I think some of what’s happening is crazy, but we’ve got a national focus to manage as well – that just increases the complexity,” he told a lunchtime gathering in Brisbane.

Ain’t that the truth. The idea of replacing a once-in-a-century externally driven boom with an artificially created speculation boom in real estate was always fraught.

It took even longer for the prudential regulator, the Australian Prudential Regulatory Authority, to enforce the decision to limit the investor frenzy driving the mania. Now it’s all catching up.

Will Sydney and Melbourne property prices collapse? That depends on your definition of crash. If history is any guide, they undoubtedly will come under pressure and could easily afford to wipe out a significant portion of the 30 to 40 per cent gains of the past few years.

Macquarie Bank last week took a stab. According to the Millionaire’s Factory, a 7.5 per cent decline through next year and 2017 is on the cards.

The next day, Morgan Stanley added another bearish tone to the debate, arguing in a note to clients that Westpac’s rate hike “is likely to have a disproportionate impact on housing sentiment, given it affects the entire back book, comes without the cover of an RBA rate cut and takes effect right ahead of two ‘super weekends’ of elevated auction volumes”.

The collective intake of breath immediately drew out property spruikers vehemently denying even the possibility of a downturn. But you don’t have to delve too far into the past to see just how conservative Macquarie’s estimate is.

Higher interest rates are the last thing the Australian economy can afford as the mining boom wind down shifts into second gear, slumping commodity prices tear a hole in the economy and with the automotive industry facing imminent shutdown.

Back in 2010 and 2011, as the global economy wheezed, Australian residential property dropped about 10 per cent, with the top and bottom ends of the Sydney market hit hardest.

And, whatever you do, don’t mention the phrase “property boom” to anyone in regional Australia, where prices have been on the slide or stagnant for years, or the other capital cities, particularly the resource states.

According to RP Data Corelogic, Perth, Adelaide, Hobart and Darwin real estate have all registered falls in the past 12 months.

Whenever real estate prices decline, opportunistic sellers withdraw stock, which tends to limit the falls. At least, that is the experience when the economy is still growing. It’s a different story during recessions and periods of high unemployment when sellers have no choice.

During the recession in the early 1990s, rising unemployment and labour dislocation caused a rise in defaults that shook a banking system already reeling from massive corporate loan losses in the late 1980s.

Ironically, just as now, it was loose monetary policy in the aftermath of the 1987 stock market crash that fuelled a housing boom that led into the “recession we had to have”.

Back then, the Australian property market was still relatively sanely priced and household debt as a proportion of income was a modest 60 per cent. It’s now risen to 180 per cent.

That makes Australian households extremely sensitive to any rise in interest rates and our banks extraordinarily exposed to any downturn in the housing market.

Westpac’s decision to lift rates last week has been a year in the making.

Between them, the big four have raised $18 billion in new capital from shareholders so far this year to meet the stringent new requirements. There’s probably more to come.

All along, the banks warned it would be customers who would bear the costs of the new rules; even if the rules were designed to save them from themselves. And so Westpac merely has opened the floodgates. The other members of the cosy little oligopoly that is Australia’s banking system will wait a respectable week or two before following suit.

After all, there are record profits to protect. And with shareholders now dependent on bank dividends to fund retirements in a low interest rate world, no banker could afford to offend them and expect to remain employed.

So the profits are being directed towards dividends. And rates are rising to cover the dividend flow.

This is the conundrum facing Glenn Stevens. While even he now is pointing to the growing risk in the financial system from runaway housing prices and a banking industry overexposed to exorbitant mortgages, trying to unscramble it all will only add to the risk of a broader recession.

Higher interest rates are the last thing the Australian economy can afford as the mining boom winds down and shifts into second gear, slumping commodity prices tear a hole in the economy and with the automotive industry facing imminent shutdown.

To counter the hike in retail interest rates, the RBA will be forced to further hack into already record low official rates, just to keep retail rates steady.

It didn’t have to come to this. Deliberately firing up the Melbourne and Sydney housing markets from their already elevated levels was a mistake.

Time and again since late 2012, the RBA rebuffed calls to impose lending controls on housing to ensure the benefits of low rates were directed towards more productive areas of the economy.

But the “animal spirits” of entrepreneurialism that Stevens attempted to conjure, only had eyes for real estate speculation.

Booms tend to precede busts. And that adage about the bigger the boom still holds true. It’s playing out right now on a global stage with commodities.