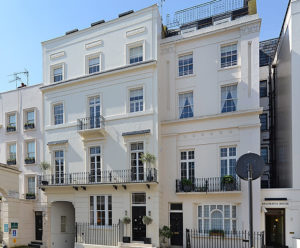 Five-bedroom house in Belgravia has cut its original asking price by £1m to £8.95m

Aleksandra Wisniewska  For the Financial Times

Brexit uncertainty hangs over London’s luxury property market like a fog. Since the referendum in June 2016, house prices in prime central London have dropped 14 per cent, according Savills. Meanwhile, sales are down 19 per cent, according to LonRes. However, despite the endless political wrangling, some buyers believe they see the opportunity for a Brexit bargain — especially if they are buying in dollars. One US-based buyer, who asked to remain anonymous, has just bought a flat in Mayfair for £6m after negotiating a discount of more than 10 per cent. He says the weak pound, attractive borrowing rates and overblown stories about professionals leaving London in their droves all contributed to his decision to buy now. “London is the default investment locale, not only for the US but for the world,” he says. “The idea that people will pick Brussels, Frankfurt or Paris over London was misplaced.” 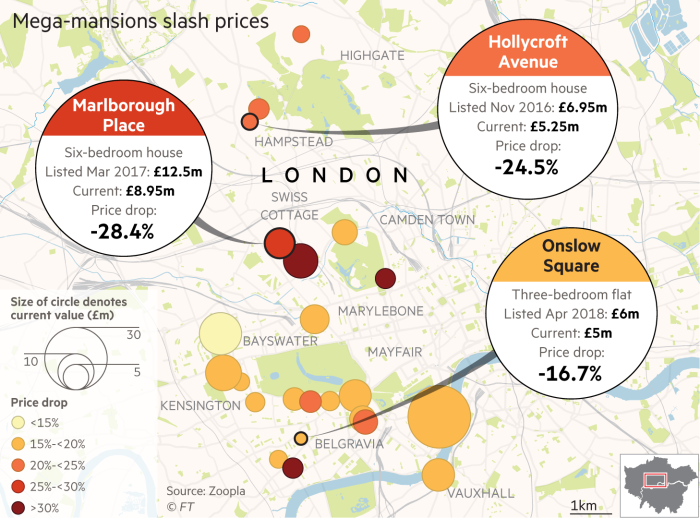 The fall in the value of sterling since the referendum has made expensive property in London more attractive to overseas buyers. On the currency play alone, if the US-based buyer had paid for his £6m flat in dollars in October 2015, it would have cost him about $9.18m; this month, the dollar amount would be $7.8m. The buyer expects the strong value of the dollar to fall eventually, making his investment worthwhile. “In the short term the UK has been disproportionately hurt by Brexit, but in the long term it won’t be at all,” he says. He intends to rent out his apartment and is expecting a 3 per cent yield. 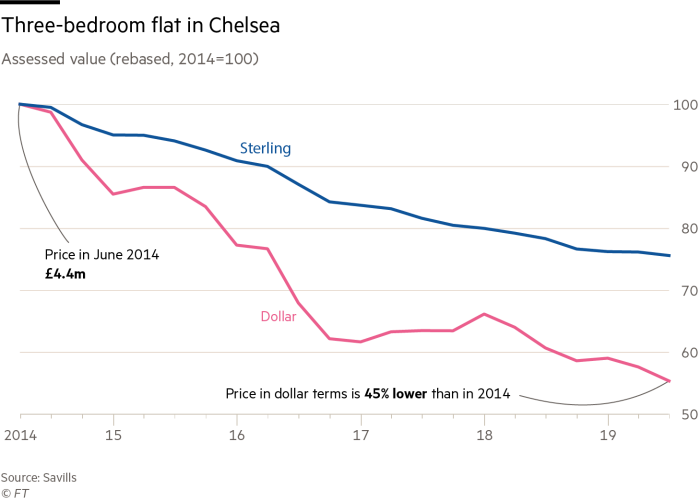 This buyer’s approach is typical of many international purchasers who leverage the currency advantage. New data from LonRes show that transactions on properties in prime central London rose 14 per cent in the third quarter of 2019 compared with the same period last year. “There is much more activity than we were expecting in the run-up to the Brexit deadline [of October 31],” says Rory Penn of Knight Frank. He sees buyers taking a long-term view, especially when relocating a family to London for the next five to 10 years. “You can get a much better house than you could a couple of years ago,” he says. “I don’t think there is any rush to sell but a lot of our buyers have been buying this year because they believe it’s the right time,” says Camilla Dell of buying agency Black Brick. “Brexit is a blip — it will be over soon,” says Ed Lewis, head of residential development sales at Savills. “The further away you are from London, the less Brexit is relevant. If you’re sitting in Hong Kong, Beijing or Shanghai, you look at London in terms of currency value and see it as an exciting opportunity.” 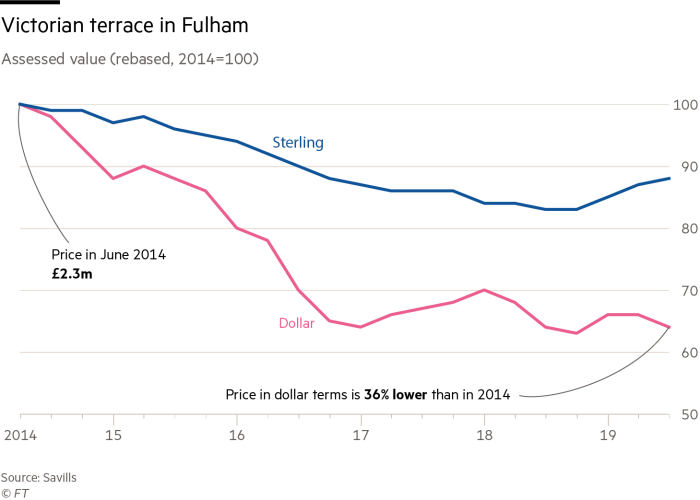 Buyers do not even need to be far away. A 48-year-old Belgian national who also asked to remain anonymous recently bought a smart family house in north-west London after renting in the city for several years. “If I could, I would have bought two or three years earlier,” she says. “But I am not unhappy because when the market is nervous, it is not a bad time to buy.” She paid £2.5m for her six-bedroom semi-detached house near Willesden Green. She bought the home through Sotheby’s and managed to negotiate 11 per cent off the asking price. 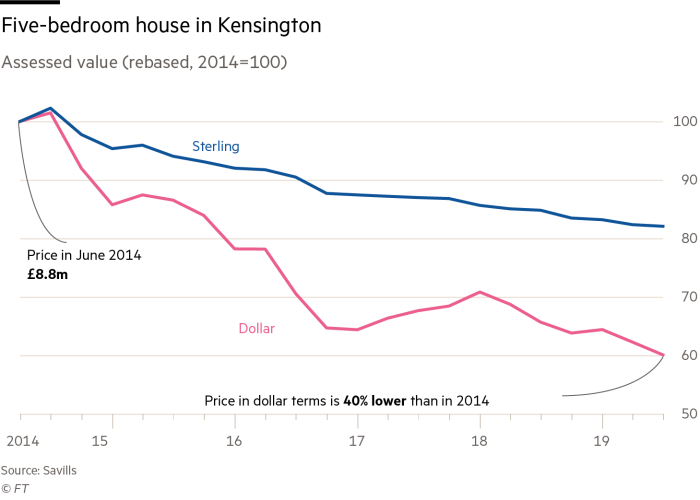 Similar discounts — and even larger ones — abound. Several homes on the market with asking prices of more than £5m have had their prices slashed by more than 30 per cent. A six-bedroom house in Chelsea, currently marketed for £5.95m, was listed in 2013 at £9m, according to Zoopla. In Hampstead, a six-bedroom home currently marketed for £5.25m was listed on Zoopla in November 2016 for £6.95m. Estate agency Arlington Residential is selling a seven-bedroom house in Highgate for £8.65m that was originally priced at £11.95m. Best Gapp is marketing a five-bedroom house on Halkin Place in Belgravia for £8.95m, a reduction of £1m on its original asking price; and a six-bedroom terraced house in Westminster’s Smith Square is on offer for £6.95m, down from £7.85m via Maskells. “I don’t think the market will do anything for a year or two,” says the Belgian buyer. “The next 10 years will turn out to be a good time to buy.” 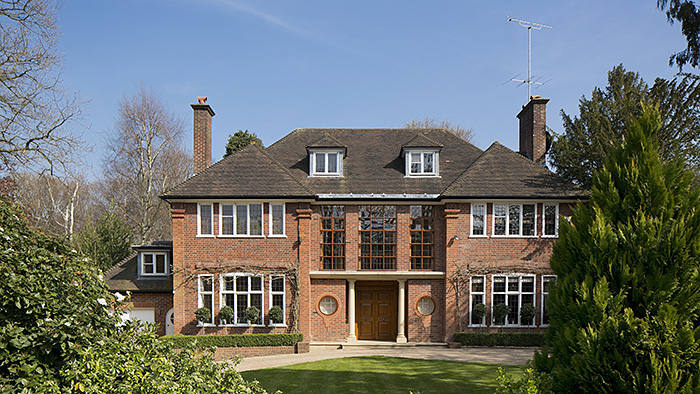 Seven-bedroom house in Highgate was originally priced at £11.95m; it is now for sale at £8.65m

If she were taking a short-term position, she says a bigger concern is a change in the UK government. “It’s not that Labor itself is bad news for the housing market, which usually does well under Labor government,” says Henry Pryor, an independent buying agent, “but Corbyn and McDonnell’s version of socialism frightens clients — they have openly talked about sequestrating long-term empty properties and discussed extending Right to Buy to private tenants.” 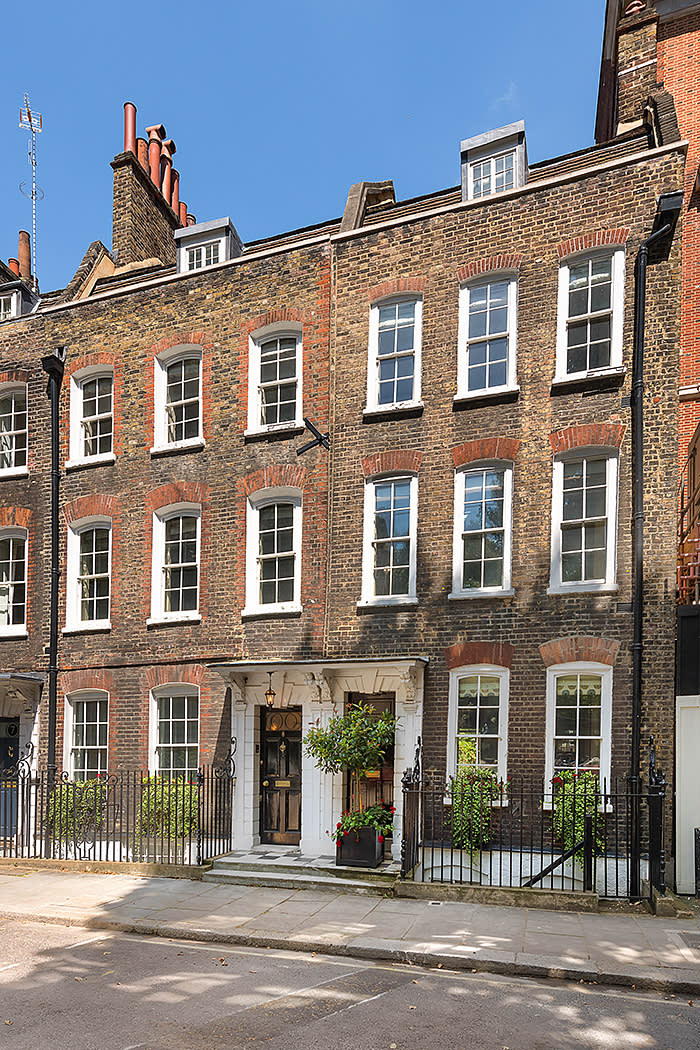 A six-bedroom house in Smith Square has had its price cut from £7.85m to £6.95m © AlexWinship Photography

“Anyone in the middle and upper class would be badly affected,” says Trevor Abrahmsohn of Glentree Estates, predicting a flight of capital from the UK as “wealth creators” find other places to live. “Corbynistas are trying to make the poor rich by making the rich poor,” he says.

George Monbiot, the British writer and environmental activist, says fears over a prospective Labor government’s policy are unfounded, pointing out that Labour has not even officially formulated its housing policy yet. In June, Monbiot edited a Labour-commissioned report called “Land for the Many” which included policy recommendations. “Mansion tax, garden tax, capital gains tax — there is nothing of that kind [in the report],” he says, adding that the media coverage of it has been largely misleading. If people read the report, he thinks many would agree with lots of it. “It really isn’t trying to see every capitalist hanging from a lamppost,” he says. “It’s a redistribution of power in the housing market away from the big developers and speculators towards ordinary people.” Some international investors remain undeterred. “London is one of the best — if not the best — places in the world to be in,” says the US buyer.