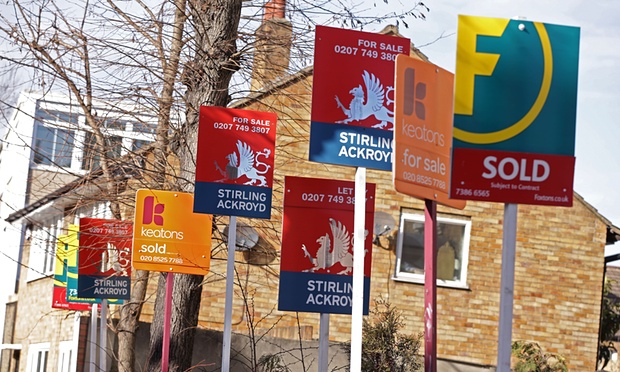 n the City of London’s insurance district, close to the “Cheesegrater” tower, the core of another skyscraper — 22 Bishopsgate — is rapidly rising out of the ground.

The decision this autumn to proceed with the 1.4m sq ft development, whose investors considered pulling the plug after the UK voted to leave the EU, is a mark of the relative optimism that has returned to the property industry after a turbulent year.

“The seismic shock of the Brexit vote brought UK transactional activity in many cases to a juddering halt . . . but life in the property world goes on,” says Mark Ridley, chief executive of Savills’ UK and Europe divisions.

As Britain prepares to trigger the process of leaving the EU, industry leaders say there will be no return to the rapid rises in commercial and residential property prices that dominated the UK market in the two years to the end of 2015.

But fears of an immediate crash — reflected in the precipitous drop in share prices for housebuilders and real estate investment trusts immediately after the June referendum on EU membership — have abated.

Housebuilders’ share prices, which slumped 37 per cent in the days after the Brexit vote, are now 15.6 per cent below pre-vote levels; real estate investment trusts, which shed 22 per cent, are now only 10.6 per cent lower.

According to a survey of forecasts by the Investment Property Forum late last year, capital values for commercial real estate were expected to fall 4.1 per cent on average by the end of 2016, then 3.6 per cent in 2017.

Rents, however, will remain high enough to keep total returns in positive territory for all sectors apart from offices, the survey finds. Recovering overseas appetite for UK real estate assets, fuelled in part by the drop in sterling, will push investment volumes this year to above 2016 levels, according to agents at Colliers International.

Miles Gibson, head of UK research at the property advisers CBRE, says: “No one is denying that risk has gone up — a risk driven by uncertainty, certainly, but also by the feeling that the global economic cycle is inexorably maturing.”

He says that factors stacked against real estate for the coming year include rising inflation and bond yields, which may lure investors out of property; a tighter labour market; and the expected triggering of the Brexit process in March.

“But on closer inspection property is likely to be rather less embattled than many might think,” Mr Gibson added, citing “surprising momentum in the wider [UK] economy [and] supply-side constraints that act as support for prices”.

House prices are meanwhile forecast to be flat, according to Savills, but with lower transaction levels as people take a more cautious approach to moving home. This will be bad news for estate agency groups, of which some — such as Countrywide and Foxtons — have already warned on full-year profits.

Housebuilders have mostly been more sanguine, thanks in part to the Help to Buy scheme, which provides government loans to buyers of newly built homes.

“Although there remains considerable uncertainty around Brexit, the mortgage market is very strong with low interest rates and powerful support for homebuyers in the form of Help to Buy,” says David Thomas, chief executive of Barratt Developments, the UK’s largest housebuilder. Optimism in the sector has been dented, however, by a post-Christmas profit warning from Bovis Homes, a top-10 builder, which said it had experienced “slower than expected build production”.

In commercial property, agents foresee a further flight to warehouses, a popular and high-performing investment class this year thanks to demand from online retailers. Savills’ analysts say that “with availability at record lows and demand unaffected by uncertainty, this sector looks likely to continue to outperform the rest of the market”.

Long leases, often linked to inflation, will add to the allure of logistics sites for investors hungry for secure income, they say.

Riskier propositions may fare less well. London offices are set for higher vacancies and “a softening of rents” as companies sublet as much as 2m sq ft of space in an efficiency drive, according to Colliers International. CBRE says that “financial services look to be among the most exposed to Brexit”.

Development is also expected to take a hit. Mat Oakley, head of European commercial research at Savills, says UK property development activity is likely to drop 30 to 40 per cent across the country, with a fall of about half in central London.

“This will make life much harder for tenants who are looking for new space, and will present an opportunity for those developers who hold the line and proceed with projects,” he adds.

As well as 22 Bishopsgate, another new tower, the Scalpel, is under construction; others including One Undershaft, set to be the City’s tallest building, have planning permission but have yet to set construction timetables. The speed of changes to the London skyline will provide one indicator of the property market’s resilience to the political storms ahead.