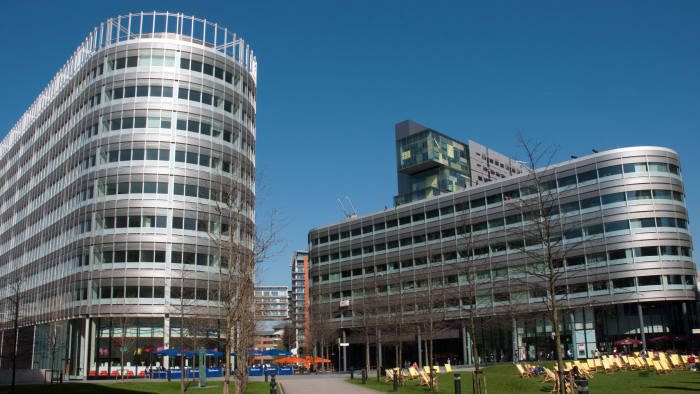 The Spinningfields development in Manchester.

Amount spent on deals drops to £9.1bn in the second quarter  The London office market is suffering from Brexit uncertainty but data shows the impact is more widespread in London . Investment in UK commercial property slumped by a third in the second quarter of the year as buyers held back because of Brexit uncertainty. The amount spent on deals fell to £9.1bn in the three months to the end of June making it the second-weakest quarter in the past seven years, according to CoStar, a data collection company. The figure was 36 per cent lower than the same period last year, and 34 per cent lower than the first quarter of this year. Mark Stansfield, head of UK analytics at CoStar, said: “Brexit uncertainty is dampening trading, causing some inertia in the market. The number of deals has fallen to the lowest level since the first quarter of 2013, so churn across the whole market has slowed.” He added: “A lot of investors seem to be waiting to see [what happens], while anecdotal evidence shows that sellers are not willing to accept discounts. Uncertainty has really ramped up in the past four or five months.” Figures from property consultancy Cushman & Wakefield last month also showed that the London office market was suffering from Brexit related uncertainty, but the latest CoStar data suggests that the impact is far more widespread. One of the main reasons for the sharp fall in transactions has been a drop in demand from overseas buyers, with foreign investment falling by 39 per cent to just over £4bn. Although US buyers stepped up their activity, Asian investors were net sellers for the first time in more than eight years. “Investors from China and Hong Kong stepped up their spend, particularly on London offices, over the past few years, but that has started to dry up over the past 18 months due to restrictions on capital outflows,” said Mr Stansfield. The one area that saw a small recovery was retail property, despite the weakness of sector where a number of high profile chains either went into administration or closes stores. 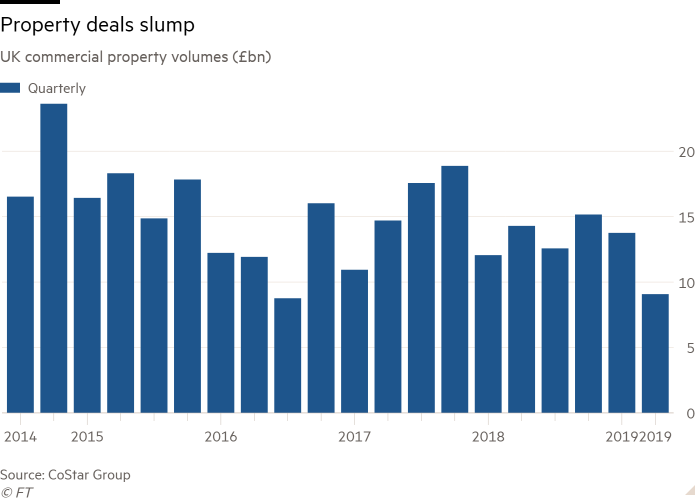 The £1.6bn spent on retail in the second quarter was 30 percent higher than the previous three months, according to the CoStar data, helped by a revival in shopping center volumes and the £429m sale of 12 Sainsbury’s stores to a US investor. But Mr Stansfield added that the retail market faced plenty of challenges: “It is still a very difficult time for retail. There are lots of store closures and CVAs, and the sentiment is weak.” The low levels of activity in the commercial property market have hit the value of some of the UK’s biggest landlords. Shares in Land Securities have fallen by 8 percent since the end of the first quarter, while British Land is down by 11 percent, both lagging the wider FTSE 100 index. Land Securities said in May that its portfolio fell in value by more than £500m in the year to March because of the crisis in the retail sector.