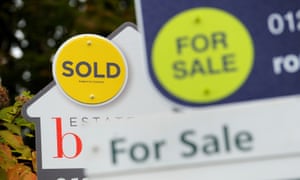 House prices have fallen in September for the first time since 2010 as Brexit uncertainty continues to cast a long shadow over the UK housing market, according to the estate agent Rightmove.

The UK’s biggest property website said the traditional “autumn bounce” in the market was simply not happening this year. Instead, the average price of newly listed homes fell by 0.2%, or £730, compared with August.

September is usually the start of an upturn in housing market activity, with price rises recorded every year for the past eight years. However, this year there is growing evidence that sellers are waiting to see how Brexit plays out before deciding whether to move.

Rightmove said the number of properties coming to market was down by 7.8% this month compared with the same period a year ago. The number of sales agreed is down 5.5% in all regions.

“In August, we reported a pre-Brexit buying spree with the number of sales agreed up by over 6% compared [with] the prior year, as buyers and sellers decided to get deals secured well before the next Brexit deadline,” Miles Shipside, Rightmove director and housing market analyst, said.

“But a month later, as the deadline gets closer and tensions heighten, there has been a big swing the other way with sales agreed numbers now over 5% below those of a year ago.”

He said the political uncertainty was particularly affecting London, where the number of new properties coming on to the market was 20% down on last year.

While Brexit uncertainty is holding the market back now, it has been predicted that prices could crash if the UK departs Europe without a deal. Last Monday, the accountancy firm KPMG warned that UK house prices could fall by as much as 20% if Boris Johnson pursues a no-deal Brexit. The biggest falls would be in London and Northern Ireland, it said.

A no-deal exit could trigger a nationwide decline of about 6% in 2020, and a drop of between 10% and 20% was “not out of the question” if the market reacted more strongly than expected, KPMG predicted.