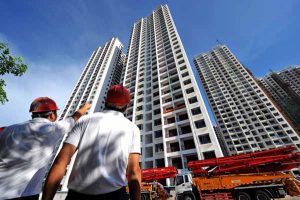 BEIJING (Reuters) – China aims to pursue “stable and healthy development” of the property market in 2018 with an increased focus on providing affordable housing and developing the rental market, Premier Li Keqiang said in a government work report released on Monday.

“China will maintain the position that homes are for living in, not for speculation,” the report said, adding it will continue to adopt a differentiated approach on property policy, which suggests the government will continue to crack down on speculation to prevent bubble risks while destocking inventories in some smaller cities.

Rampant speculation has stoked prices and raised concerns of a sharp correction. The authorities have introduced a flurry of cooling measures since early 2016 in the latest round of speculative buying.

China’s top leadership, however, has stressed the need to avoid sharp price fluctuations, concerned about their impact on the world’s second-largest economy.

The government should take steps to contain the frothy home markets in tier-two and tier-three cities in particular, Yang Weimin, a deputy director at the Office of the Central Leading Group on Financial and Economic Affairs, was quoted as saying by the Securities Times on Sunday.

“We can neither let the bubbles burst nor let it grow bigger,” Yang said.

But the government will support people’s legitimate needs for housing, the work report said, adding it will step up efforts to provide public rental housing, cultivate the rental market and push for the development of shared-ownership homes.

China has also been pumping credit into a home-revamping project to improve housing conditions for the poor. People were often given financial compensation to buy existing homes in the city after their shantytown dwellings were dismantled, in part contributing to a price surge in smaller cities.

Li said in the work report that China plans to revamp 5.8 million shantytown homes in 2018, after investing a total of 1.84 trillion yuan ($290.6 billion) to upgrade more than 6 million homes in the previous year.

A notable difference in this year’s report is the lack of emphasis on destocking the housing glut in tier-3 and tier-4 cities, which some analysts say reflects a more cautious stance as prices have risen sharply in some smaller cities as inventories fell.

The report also said China would steadily push for a property tax law this year. China is “accelerating efforts” on a draft law on property tax, Zhang Yesui, spokesman for the National People’s Congress, told a press briefing on Sunday.

Zhang said China’s tax reforms, including the introduction of a property tax, are expected to be completed by 2020.

China has considered a property tax for more than 10 years, but the idea of a tax has met with push back from stakeholders including local governments who heavily rely on land sales as a key source of financing.

Pilot tax schemes were introduced in cities such as Shanghai and Chongqing but the slow progress to roll it out nationwide has drawn criticism as prices continue to rise.

Critics say that in the absence of a property tax, short-term government measures are not capable of altering a deep-seated market perception that home prices will rise perpetually and that officials will never let the market fall, a view that has fueled speculative purchases over the years.

Editing by Jacqueline Wong FOR  THE REUTERS