During the Fourteenth session of UNCTAD that took place in Nairobi from July the 17th to July the 22nd , delegations from all over the world came to attend the event as well as to promote business and bilateral relationships with  Kenya .

One of the most interesting and active delegations was the one from Greece. The Deputy Minister for Foreign Affairs of Greece, Mr. Dimitris Mardas, led the Greek delegation.

The minister had several meetings with the Kenyan authorities as well as with ministries targeting to promote the increase of business activity between the two countries. 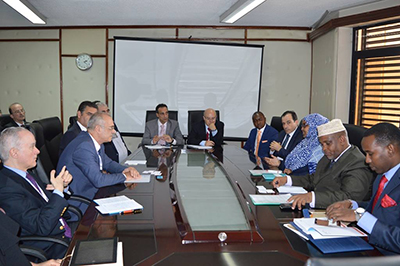 On Monday the 18th July, while speaking in the General Debate about the issue of revising the UN Charter, Mr. Mardas highlighted the time consuming bureaucratic overhaul that this decision would cause. According to him, in consideration of the 2030 Agenda, direct and practical solutions are needed that will strengthen the linkage between the states of the North and the South, the efficiency of governments as well as international cooperation. In this sense, closer cooperation between UNCTAD and the Organization of Security and Cooperation in Europe (OSCE), in which similar themes are being discussed, may prove to be effective.

Mr. Mardas also examined the factors that facilitate and those that obstruct the commercial ties between North and South. On the same note, he presented possible solutions that could improve industrial cooperation between industrialized and developing states.

The Deputy Foreign Minister, responsible for international economic relations, led a delegation of 14 Greek companies to Kenya from July 17 to July 20, with the objective of fostering the commercial cooperation and business ties between Greece and Kenya. Among his many high level meetings, the highlight of Mr. Mardas’ visit was his meeting with Dr. Amina Mohamed, Cabinet Secretary for Foreign Affairs on Tuesday 19 July. On this occasion, Mr. Mardas personally handed Dr. Mohamed an invitation from the Minister of Foreign Affairs of Greece Mr. Nikos Kotzias to visit Greece.

On Monday the 18 July, Mr.  Mardas met with Ms. Fatuma Hirsi Mohamed, Principal Secretary of the Ministry of Tourism.  At the top of the meeting’s agenda was the signing of the Memorandum of Understanding on Tourism between Greece and Kenya that is currently being drafted.

Mr. Mardas also had a fruitful meeting with Mr. Laban Onditi Rao, Vice Chairman of the National Chamber of Commerce. Later on in the day, a meeting was held with Ms. Phyllis Kandie, Cabinet Secretary for East African Affairs, Labor and Social Protection who had visited Greece in November of 2013 in order to participate in the Hellas Kenya Business Forum. Lastly, Mr. Mardas met with Prof. Jacob Kaimenyi, Cabinet Secretary of Land and Physical Planning. 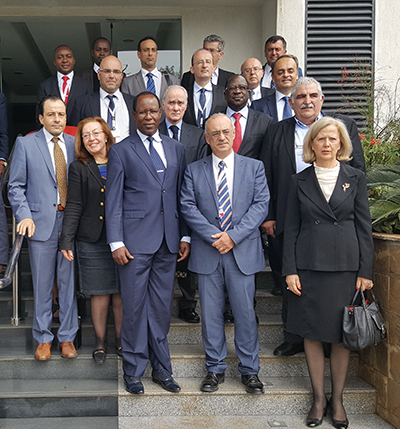 On Tuesday 19 July, Mr. Mardas held a meeting with Dr. Amina Mohamed, Cabinet Secretary for Foreign Affairs during which they spoke about the various ways to improve the bilateral relations between Greece and Kenya. Specifically, the benefits of cooperation in the blue economy of Kenya and energy were discussed as well as the possibility of a return visit of Kenya companies to Greece.

Mr. Mardas’ decision to visit Kenya was in recognition of the country’s potential for successful business ventures and market opportunities. The delegation of Greek companies represented various industries (agriculture, tourism , refreshments, construction, publications, lifts, baked goods) some of which are already established in Kenya (Africa Plantation Capital , Els & Kels , Kleemann, LDK, Seagull, Anipsotiki) while others are keen to invest soon (Viochalko, Biofresh, Rogan).
The three day visit, which concluded on Wednesday 20 July, marked the third business delegation of Greek companies to visit Kenya in the last three years.  In 2013 and 2014, business forums had taken place in Nairobi. Likewise, a Kenyan business delegation had visited Greece in November 2013. This visit comes at a time of significant increase in bilateral trade between Greece and Kenya which proves the mutual benefits of further developing their commercial relations.

Mr Nikolaos Papadopoulos, deputy of the Greek Parliament, visited Nairobi between 17 and 20 July in order to participate in the meetings held between Deputy Foreign Minister Mr. Dimitris Mardas and the Kenyan Government.  As Chairman of the Parliamentary Friendship Group for Kenya, Mr. Papadopoulos also met with his counterparts the Hon. Katoo Ole Metito and the Hon. Joyce W. Lay. During this meeting, the parliamentarians discussed the possibilities of strengthening the relations between the Parliaments of Greece and Kenya as well as the various agreements currently being drafted.

Mr. Konstantinos Kioleoglou who was part of the Greek delegation and is serving as the Regional Managing Director of Africa Plantation Capital and participated in several meetings with the deputy minister of Foreign affairs Mr. Dimitris Mardas  said that this was the best organized business delegation  over the last three years as important meetings were held that gave the opportunity to discuss about the business opportunities of the Kenyan market.

Already, there are negotiations between companies that are operating in Kenya and some of the companies that participated with the delegation in order to setup new business in Kenya and invest both in the real estate sector as well as the agroforestry. Mr. Kosta Kioleoglou added, “Kenya is a very interesting country with a lot of opportunities despite the challenges. With the support of the governments, further investments can come into the country’s lucrative opportunities. That will support the Kenyan economy, create jobs and sustainable growth while producing profits for the investors. “