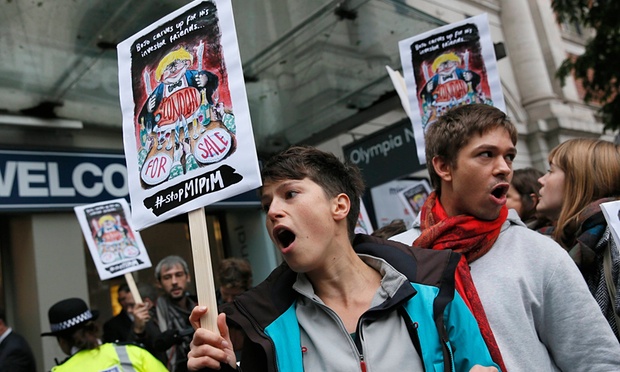 Mipim UK, the British arm of the global real estate fair that launched in 2014, opened this year’s property show on Wednesday, once again to demonstrations of protest and fury.

Outside London’s Olympia, campaign group Architects for Social Housing is offering free consultations to housing protesters and campaigners for council estates threatened with demolition, in contrast to the secret deals being done behind Mipim’s closed doors. Alongside the free advice, Streets Kitchen will provide food for homeless and hungry people.

A key focus for the protesters is that while 230 towers sprout in the City of London and its environs, an astonishing number of council estates are simultaneously being flattened. On the basis of research he carried out recently, Dr Paul Watt, reader in urban studies at Birkbeck, University of London, estimates that in London “as many as 90 council-built housing estates are potentially facing demolition as a result of what is called regeneration”.

Mipim UK, an international networking opportunity for global investors, developers and politicians, is seen as hoovering up the eye-watering opportunities for investors brought by the UK’s frenzied property boom. Sessions at the conference include “London – from social housing to super prime”, “Are you sitting on an untapped goldmine?” and “The Downing Street Forum”, which appears to offer investors and developers direct access to leading political figures.

Back in London, the south-east and other parts of the country with “super prime” spots, the demolition of low-income households means that tens of thousands of people will have to leave their homes. Since last year’s Mipim, a housing protest movement has been spawned, which witnessed the occupation of London’s Aylesbury Estate, while activist groups such as Architects for Social Housing, the Radical Housing Network and Generation Rent have shot to prominence. In his acceptance speech, incoming Labour leader, Jeremy Corbyn, said he was fed up with the “social cleansing of London”.

The impact is already clear to see. Last year the Heygate Estate in Elephant and Castle – home to more than 3,000 people on low incomes – was demolished. In its place, developer Lend Lease is constructing Elephant Park where, according to property website Rightmove, a one-bedroom flat is on the market for £515,000 and a two-bed flat for £750,000.

Even accounting for the government’s Orwellian redefinition of “affordable housing” – now up to 80% of market rent – that is not affordable for most Londoners on ordinary, let alone low, incomes. Needless to say, research shows that most former tenants and leaseholders who lived on the Heygate have left the borough.

It is very difficult to get exact figures and timescales for what individual boroughs are doing; some councils make more effort than others to keep people in the area. But the broad picture of people on low incomes displaced by an unregulated dash to realise soaring land values, is the same.

In Lambeth, for example, the council has decided to go ahead with the full demolition of Cressingham Gardens, despite a very vocal campaign against it by the majority of residents. According to Birkbeck’s Watt, Lambeth is also considering demolishing another five or six estates in the borough, which it says is the only way it can build any affordable housing.