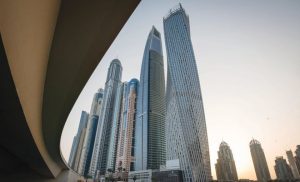 LONDON: It has been almost half a decade since Dubai was awash with exuberance following its Expo 2020 bid win. The property pundits of the day predicted vast transformative effects for the emirate such as vertiginous property value hikes, sold-out hotels and a booming jobs market.
But that was before the decline of oil prices, the introduction of VAT, and a regional diplomatic crisis.
With construction work well under way ahead of the opening of the event in 31 months’ time, the property market remains stubbornly in the doldrums.
The much-hyped “Expo effect” has yet to be realized.
Dubai residential property prices and rents declined by 5 to 10 percent overall in 2017, according to data from Standard & Poor’s (S&P), the credit ratings agency. It expects that a “three-year downturn” in Dubai’s property market is likely to continue until at least 2020.
Still, S&P notes that the property sector could still benefit from the potential increase in economic activity and positive business sentiment attached to the Expo event, as an expected 25 million visitors and new residents support the market. “We anticipate a speculative surge in prices, devoid of any demand and supply mismatch,” the report added.
According to Oxford Economics, Dubai GDP recorded a growth of 3 percent at the end of 2017, and is expected to grow at a lower average annual rate of three percent over the next three years. The OECD expects global growth of about 3.9 percent this year and next.
“I think one of the things we saw in the lead-up to the bidding process for the World Expo in summer 2013 was that there was a positive expectation in the market and this pushed up prices by about 20 percent,” said Faisal Durrani, partner and head of research at Cluttons.

“That growth spike was unsustainable, so we have seen a softening in value. This is not like the crash after the recession. It’s a gradual softening rather than a sharp correction. There is still an expectation that there will be a rise in demand before 2020.”
But for that to happen, buyers must first be found for a glut of new homes under construction, largely funded by developer stage payment plans.
Property broker JLL estimates that as many as 34,000 homes could be completed this year, with another 28,000 due in 2019. However, the real picture is difficult to discern as in previous years the actual completion of new homes has trailed what was expected. For example, JLL notes that while the proposed number of units last year numbered 31,300, the actual number was 14,700. In fact, for the past five years, the materialization rate for expected home handovers has never risen above 55 percent, according to JLL data.
Yet the stock of homes remains the biggest concern for many analysts trying to predict when the long-expected recovery will happen.
“There’s still time to see if the Expo will lift property values,” said James Lewis, partner and general manager at Knight Frank Middle East. “But there is just so much oversupply.”
JLL forecasts that prices will continue falling this year as the market absorbs additional supply. “New supply is expected to see prices and occupancy levels continue adjusting downwards,” the report said.
Residential stock in Dubai stood at 491,000 units at the end of 2017, made up of 403,000 apartments and 86,000 villas.
So could the Dubai Expo, due to be staged for six months from Oct. 20, 2020, be the fillip Dubai’s real estate industry needs?
The event is expected to attract up to 300,000 visitors a day when it opens. Standard Chartered has predicted it will also create around 300,000 new jobs and attract new residents in the emirate city, which currently has a population of three million.
Dubai is spending heavily on infrastructure in the run-up to the event and recently approved its biggest ever budget for 2018.
Infrastructure expenditure is expected to surge by almost 20 percent this year to more than 56 billion dirhams ($15.24 billion).
The Expo 2020 Dubai organization awarded 47 construction contracts last year worth 11 billion dirhams in preparation for the event.

“This aims to make the upcoming mega international event — Expo 2020 Dubai — one of the best in the history of Expo exhibitions,” said Abdulrahman Al-Saleh, director general of the Dubai Government’s Department of Finance, in a statement.
The infrastructure spending is at least expected to reap rewards for the broader economy.
“There is a considerable amount of infrastructure that has been completed or is under way, which could stimulate the economy but at this point the long-term returns on infrastructure are hard to see,” said Knight Frank’s Lewis.
He added that the industry would “welcome” the introduction of government incentives to buy property and broaden out the affordable housing sector.
That could help to address the mismatch in supply and demand as high-end and luxury apartments continue to be delivered into a market that desperately seeks more affordable units.
Cluttons’ Durrani sees most of the new jobs and housing demand around Expo 2020 coming from low to middle-income workers who will be seeking affordable housing.
“Similarly to London, Dubai has much more demand on the lower end of property than the luxury end. For example, the Burj Khalifa values are down 70 percent on 2008, whereas affordable communities such as Discovery Gardens or Motor City prices are virtually unchanged. Affordability is a major factor in the market and we are not seeing any more supply in that sector.”
Durrani also explained that expatriate workers, particularly lower income earners, are not in the market to buy housing.
“According to our research, the average worker in Dubai earns 200,000 dirhams annually. The properties you can get on that income are practically non-existent,” he said. “Also the tendency to purchase in the UAE depends on their tenure in UAE and their life plans. Many workers prefer to rent rather than buy what is often a second home. It’s about finding the right solution for affordability and we aren’t there yet.”
To establish a link between a one-off event such as Dubai Expo 2020 and broader property market sentiment, analysts look at historical events for clues.
“We looked at Olympics that have been held around the world,” said Durrani. “We saw no impact whatsoever on property prices in Beijing and Athens and London, for example. It’s up to each city to make the most of the opportunity. The direct impact on the real estate sector is hard to quantify unless the government incentivizes it.”
If the much-hyped Expo effect is indeed a reality, we should see its impact soon.
“We have already seen directly related Expo contracts issued, so in the next six to nine months, lawyers and construction companies will increase their presence, which may help to improve demand. We have seen that this visibility lags so we may see a stabilization in the market in the next nine months,” said Durrani. “The contracts were awarded so the jobs should be imminent, which should help stabilize demand — certainly at the lower end.”