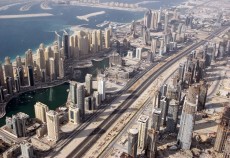 The first quarter 2016 real estate review issued by local consulting firm ValuStrat, has shown that after a nine month relatively stable residential market, there were minute indications of an early recovery in some areas, signalling possible signs of a bottoming-out in property values across the coverage locations.

The first quarter 2016 VPI displayed a 3.5% annual decline in values. However, the general monthly rate of decline has shown no change in residential values.

After a nine month relatively stable VPI, research by the consultants reveals that more end users are seeking to get on the property ladder, anticipating long term capital appreciation while saving on monthly rental expenditure.

Dubai’s apartment market has shown a slight quarterly improvement in values, up 0.1% while the villa market saw values marginally decline by 0.2%. In terms of registered residential transactions, median residential prices were 10.4% lower year-on-year and 2.5% lower quarter-on-quarter. However some areas witnessed increased transaction volumes during this quarter.

“High-end villas priced more than $(AED10m) saw about double the number of transactions as compared to the previous quarter. Also, their share of overall villa registrations increased from 5.7% in the last quarter to 11.1% now,” said Haider Tuaima, ValuStrat research manager.

Office transaction prices fell by 9% since last year and 3.1% since the last quarter. Median asking rents for office space remained relatively stable during Q1, with only a marginal change recorded the last 12 months.

The total number of hotel rooms and hotel apartments at the beginning of 2016 stood at 98,333. Five hotels with 1,581 hospitality units were added in Q1, one five-star, while the rest are three- and four-star.