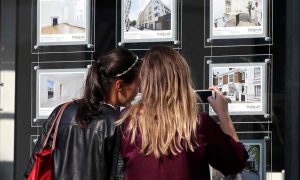 England’s housing market is broken, the government has admitted, with home ownership a “distant dream” for young families, as it unveiled a white paper promising a fresh wave of home building.

The communities secretary, Sajid Javid, told the House of Commons that average house prices had jumped to 7.5 times average incomes and rents in many places swallowed more than half of take-home pay.

He placed the blame almost entirely on low rates of house building, telling MPs that the number of home completions in England has been lower than anywhere else in Europe, relative to the population, for the last three decades

Javid said house building needs to rise to 225,000 to 275,000 units a year compared with 190,000 built in 2016 and as little as 95,000 following the financial crisis. But the white paper warns that the density of development in England’s urban areas will have to increase, and home sizes may shrink.

“Our housing market is broken,” he told MPs. “We have to build more, of the right homes in the right places, and we have to start right now.”

“Is that it?” he said after Javid gave his statement to the Commons. “His statement will desperately disappoint millions of people struggling to cope with the cost of the housing crisis.

“After seeing home ownership in freefall over seven years of Conservative government, this is a white flag not a white paper. It confirms the Tories have given up on home ownership and have no plan to fix the country’s housing crisis.”

Javid said there was “no single bullet” that would solve the crisis, but that the government could act to speed up house building across many fronts.

But he stepped back from giving the go-ahead to build on greenbelt land. “This [paper] will not entail recklessly ripping up our countryside,” Javid said, adding that not a single restriction on greenbelt building would be lifted.

The white paper confirmed the government would press ahead with a controversial ban on letting agency fees for tenants – but there is still no firm date for when this will happen.

In November 2016, the government announced it would introduce a ban, which means tenants will no longer have to pay fees that can run into hundreds of pounds when they sign a new tenancy agreement. But some felt at the time that there was a worrying lack of detail.

The white paper states: “We will consult early this year, ahead of bringing forward legislation as soon as parliamentary time allows, to ban letting agent fees to tenants.”

Among the main proposals in the white paper are:

The white paper envisages urban areas in England becoming more densely populated than ever, with cities expected to build upwards rather than outwards, and for homes to get smaller.

New-build homes and apartments in England are already among the smallest in Europe, but the white paper suggests that the size of homes could shrink even further.

The white paper says that a “one size fits all” approach on minimum space standards may not fit modern needs, citing developer Pocket Homes – which builds flats that are only 400sq ft (37sq metres). It said the government would review the Nationally Described Space Standard so that there could be “greater local housing choice”.

The growing gap between planning permission granted for new homes, and the number actually built, is also highlighted by the white paper. While in 2007-08 the gap was only 25,000 homes, by 2015-16 it had grown to nearly 100,000. The paper says: “There is concern that it may be in the interest of speculators and developers to snap up land for housing and then sit back for a while as prices continue to rise.”

The paper promises a carrot-and-stick approach, with local authorities planning departments beefed-up and given extra powers to speed up development. But in a return to more centralised control of building, the white paper warns councils that “where the number of homes being built is below expectations, the new housing delivery test will ensure that action is taken”.

Four out of 10 local authorities, it warned, “do not have a plan that meets the projected growth in households in their area”.

Building on brownfield sites will be at the core of the government’s plans. It said it would release enough land to build 160,000 new homes during this parliament, and expected local authorities to do the same.

The share prices of all the major housebuilders leaped despite the promise to help smaller firms. Persimmon, Barratts and Taylor Wimpey were all among the top 10 highest risers on the London stock exchange as Javid made his statement to the Commons.

Campaign groups said the white paper offered little to the growing number of private renters. Dan Wilson Craw of Generation Rent said: “Sajid Javid has the right analysis about the plight of renters, but his white paper has failed to offer us anything of substance.

“By limiting longer tenancies to new purpose-built private rented homes, the government has offered renters the bare minimum. The vast majority of tenants will remain in existing properties, with no certainty over their home beyond the next 12 months.

“Until the government builds enough to overcome the housing shortage, high rents will continue to stifle living standards. Renters on stagnant wages need homes that cost no more than a third of their income, not ones let at 80% of the market rent, with a sticker that says ‘affordable’.”