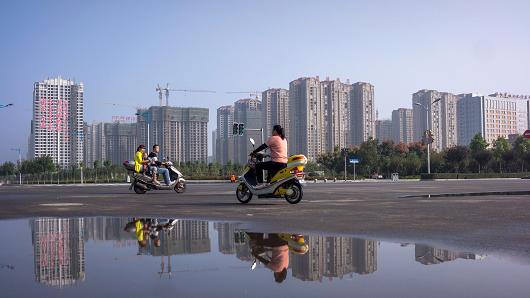 The pace of the fall in Chinese property prices moderated in April, supporting growing optimism that the housing downturn may have turned a corner.

Prices os new homes across 70 cities in the world’s second largest economy fell 6.1 percent in April from the year-ago period, unchanged from March, according to Reuters’ calculations of data released Monday by the National Bureau of Statistics.

But on a month-on-month basis, prices were flat, compared to the 0.1 percent drop in March.

“Aggregate prices remain under (modest) downward pressure, but the signs of healing broadened further in April to a larger sample of non-tier 1 cities, while tier-1 prices are now unambiguously rising again,” according to a note from Westpac Global Economics.

“This provides further indication that the overall market has left the very worst behind it,” it added.

China’s property sector, which contributes about 15 percent to the country’s economy, has been slowing in recent years, hit by housing curbs and oversupply.

But analysts in recent weeks have been turning positive on the sector. JPMorgan Chase and Barclays are among banks that have raised price targets for shares of Chinese property developers, underscoring a rally that’s already pushed the Shanghai property subindex up 28 percent so far this year. The index traded down 1.6 percent Monday following the data.

Market watchers believe the flood of liquidity from China’s aggressive monetary easing could spur housing sales. Last week, the People’s Bank of China cut interest rates for the third time since November, on top of the two cuts in reserve requirement ratios of banks in recent months.

“China has been struggling with oversupply for some time so the fact that the markets are beginning to clear, the fact that inventory levels are beginning to fall, even in some of those tier 3 and tier 4 markets which we have been most concerned about, I think is a good thing,” said Russell Platt, CEO of Forum Partners which has $4 billion in assets under management globally.

The rebound however, should be treated with caution.

“We retain the basis position that the market bottomed around September, but the recovery trajectory will be very timid, with sales unlikely to move sustainably into positive year-ended territory prior to Q3 with starts lagging behind,” said Westpac Global Economics.