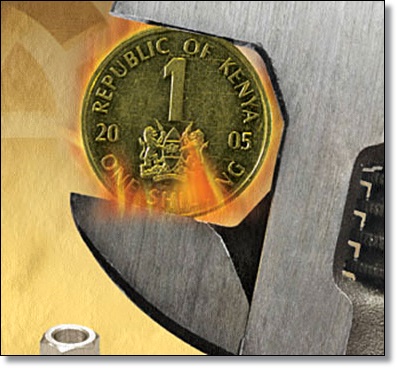 Basic principles of economics say that for any country a widening current account deficit and a rising debt level will eventually herald a weaker currency. The Kenyan economy has been growing for the last years but its account deficit and debt level are growing fast as well. On top of that, the need to support growth which is pushing the Central Bank of Kenya to loosen its monetary policy, helped by the strengthening US dollar against other world currencies is leading the Kenyan Shilling to weaken.

A few days ago (May 28th) Kenya’s shilling weakened to head for its biggest monthly decline since September 2011. It is already trading at a 4 years low, with an exchange rate of 98.9 KES to the USD. The shilling is likely to weaken further this year to as low as 105 against the dollar, which was the support level of the currency back in 2011, experts say in a new report. The shilling is down 4.3 percent in May, falling for the third straight month, and the worst performer among 24 African currencies tracked by Bloomberg after Ghana’s cedi according to available reports.

The truth is that the Kenyan economy took off a few years ago and most of the people feel that nothing can stop this journey but what if expectations do not come through? Imagine you are inside a very shiny modern looking aircraft ready to fly; your mood is great and feeling relaxed as if nothing could go wrong. How would you feel though if, after taking off, you noticed one of the engines on the plane wasn’t working properly while the other engine was overheating as well? Now suppose the captain announces that you should buckle-up because the plane is about to meet an approaching hurricane?

This is what Kenya’s economy is currently going through. The country is in the middle of a “perfect storm” and the declining Shilling is the most visible manifestation of Kenya’s economic woes. Why has the Shilling been falling so much and so unpredictably, although we read in the news that the Kenyan economy is increasing and is one of the best in the world?

The main reason is that Kenya’s economy is increasingly imbalanced: the country is importing too much while exporting too little making it vulnerable to shocks and not ready to support internal or external effects. The gap between imports and exports needs to be financed by financial inflows other than export earnings. In 2014, imports have soared for one more year, while exports remained stagnant and tourism had declined. The gap between imports and exports, also called current account deficit, currently stands at above 9% of GDP – one of the highest in the world!

Today, Kenya’s main exports aren’t even sufficient to offset expenditures for its oil imports (That being said, falling oil prices helped to push down the deficit of oil imports accounting for nearly a quarter of the country’s total import bill), not to mention all other imports beyond oil!. The money to pay for any additional imports needs to come from somewhere.

Anyone doing business that has even a small economic background and a little experience is already getting prepared to face the challenges that will come with a very weak currency to trade with. However any turbulence in the economy affects everyone, not just the business sector only. The shilling was expected to benefit from cheaper oil. However going forward we still see continuous depreciation since this movement has been driven by other fundamentals.

Fundamentally the shilling has been affected by reduced inflows from tourism and exports (agriculture and manufacturing), combined with the rising import bill especially on capital goods necessary for the increased infrastructure and development. At the same time, Kenyans continue to consume more and more goods mainly imported, trying to fulfill the thirst for a better lifestyle via new cars, phones, tablets etc.

The sector of the economy that had the most impressing growth over the last years is the Real estate Sector. It represents over 10% of the country’s GDP. Although the real estate attracted initially foreign investments mainly from the Diaspora and the Somali Communities, the majority of the money invested in the industry comes from the internal market. The insufficient if not nonexistent industry and manufacturing force of Kenya gives no alternative but to import most of the materials required to construct buildings and infrastructure, increasing the amount of money spent to imports on a daily basis.

Kenyans, amazed from the possible large and easy returns of a real estate investment ignored all the other sectors of the economy and focused into the Property market. Life time savings have been invested into Land or Building projects around the country. The money actually is slowly going outside the country via consumption of goods and expenses to imports while ownership gets bigger and bigger. The available cash in the market becomes less and eventually the weakening of the Kenya shilling, if it persists will dampen growth in real estate sector because of imported building materials.

Did anyone ever think what is actually happening? When one buys an overvalued apartment from a developer, he becomes an owner but his money now is not in his account anymore. It is the developer – seller who holds the money. The price paid included a huge overvalue and a very big profit. The developer- seller now will enjoy his successful business returns by buying a new luxury car, a new watch, and travel with the family and will send the rest of his money to his private banking accounts abroad, in a US dollar account where his money will be safe. Most of the money spent are leaving the country since most of the goods that someone is using or buying are imported.

The same applies to almost every transaction in the market, every time we are buying something imported, most of the money we pay is going to another economy, another country, another market which is benefiting from Kenya’s low production of goods. Of course Kenya has in theory the weapons to balance this. Exports and tourism have always been the solution. It is not easy and it will not happen fast but it has to happen in order to avoid a total collapse of the economy. (Same as when people tend to consume more than what they can afford they end up broke).

In the meantime, every economy shows signs of the problem and those who know are under alert. Initially we will see the inflation going up , then the currency’s value slipping until it is officially devalued, followed by the country starting increasing its external and internal debts, unemployment starting to grow, the transactions in the market slowing down and finally daily life becoming harder and harder as everything becomes far too expensive.

A lot of people argue that a devaluation of a currency is the solution. Certainly, devaluations amid crisis can contribute too and are very often associated with significant economic contractions. History is quite clear on this point. The interesting question concerns what happens next. Take an economy that has been enjoying a boom backed by large capital inflows, and which then faces a sudden stop, capital flight, and crisis. Foreign lenders had been willing to finance a consumption and investment boom, but for one reason or another eventually they will stop financing and investing into a market that is not performing so well anymore. Sooner or later the time will come to pay back the loans.

How will this adjustment take place? Certainly not painlessly, no matter how one proceeds. But the argument for devaluation is that the pain can occur relatively fast. A substantial currency depreciation instantly hits consumer purchasing power and reduces wages. Purchases of foreign goods fall because as prices of foreign goods soar. The pace of adjustment will depend on how fast domestic industries will pivot toward import replacement and exporting. But to analyze episodes of devaluation is to see a lot of steep lines: sudden plunges in output and fast, V-shaped recoveries, and sudden jerks in the current account from large negative numbers to near-zero or positive ones. Absent devaluation, the path is slower. When the party ends, domestic firms and households can no longer afford to buy domestic goods and services, and foreigners aren’t interested in buying overpriced goods and labor. So firms go bust and unemployment rises.

With lots of unused industrial capacity and crowds of unemployed workers, prices and wages slowly decline. More flexible labor markets with lots of room for productivity growth will adjust faster than stodgier economies. But the pace of adjustment is likely to be slow. You get the steep side of the drop on the way down, and then you get a few years of sideways movement while unemployment drags down wages, and then you get the lift as exports pull the economy back toward potential.

The worry of course, is that the slower route will result in a lot of needless pain: that there are risks to devaluation, but they’re likely to be worth the faster adjustment and that the pain of the slower route might be bad enough that the economy gives up on the hard road and devalues anyway. Or worse; long, grinding depressions have been known to produce nastier things than high unemployment which anyway exists already in Kenya. Hence, the argument is not that when a country faces a balance-of-payments crisis and devalues, it somehow gets off scot free. Rather, it’s that adjustment is typically much faster and easier and carries less political economy risk (including the possibility that devaluation may ultimately be necessary anyway).

Today no one even thinks about currency devaluation and everyone prefers the silent sliding of the currency over the last months. At the end of the day too much analysis about the Kenyan reality is not the most popular topic, as it is better if we keep people living in a dream world where everything gets better and nothing could go wrong. It is a matter of time though until everyone will feel the consequences of an economy increasing imbalanced and of an over consumption of goods that will lead to economic stagnancy.

The last months the KES is falling against the dollar not because it was devaluated officially according to a plan but simply because it cannot support its value against foreign currencies in the markets. Inflation, fueled by the shilling’s slide, accelerated to 7.1 (nominal) percent in April respectively, near the top end of the government’s target range. If someone simply thinks what will happen if kes continues to slide and oil price return to where it was a year ago, then the dream becomes a nightmare. 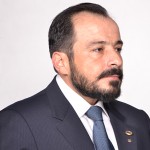