An analysis of the German housing market based on purchasing power shows a sharp slowdown in price rises in wealthy, mid-sized cities in 2014, Fitch Ratings says. This follows the moderation in prices already seen for large, wealthy cities since 2011 and may reflect affordability pressure. This is in line with our view that the German property market will experience moderate rather than strong price growth. In its analysis of the German residential property market, Fitch uses four categories (A-D) based on a purchasing power index (PPI) that reflects individuals’ disposable income by Landkreis (an administrative district between the federal states and municipalities). Purchasing power as measured by the PPI has been a reliable guide to differences in default rates and foreclosure proceeds. We therefore use the A-D categorisation, where A signifies a wealthy and D a low-wealth area, to help determine our residential mortgage loss assumptions. Fitch has compared the latest property prices from research and consulting firm BulwienGesa for 127 German towns and cities by population size with our four PPI-based categories. For both ‘Metropolitan’ urban areas with populations of over 500,000 and ‘Regional’ areas with populations below 100,000, price growth levels for all wealth categories converged towards 4-5% last year. This is in contrast to recent years, when growth rates have shown more variation. For example, in 2013, property prices increased by 4% in D-category (low-wealth) Regional areas, and by more than 11% for the A-category (wealthy) Metropolitan areas. However, prices did not converge across PPI categories in middle-sized urban areas (‘Cities’) with populations of 100,000-500,000. Instead, price growth fell sharply in the A-category (wealthy) Cities, even dropping below the growth rates for low-wealth Cities (D-category). The deceleration in apartment price growth in A-category Cities was particularly pronounced, slowing to 3%, from around 10% in 2013. 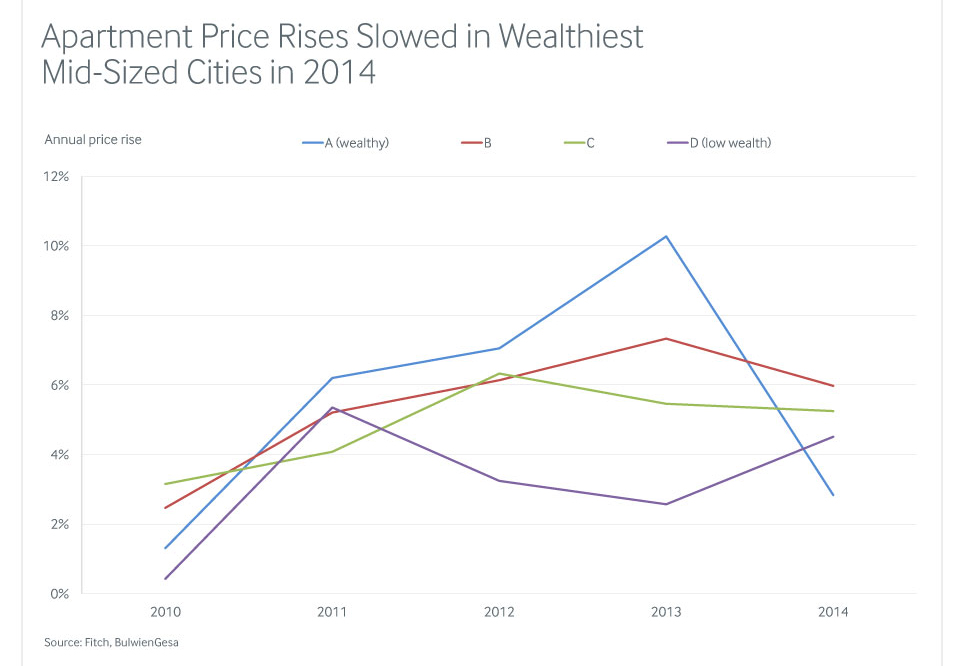 This is notable because demand for German residential property has generally shifted from the largest urban areas to mid-sized and smaller urban areas since 2011 (the exception is Munich, which continued to post strong price increases last year). This significant slowdown in mid-sized A-category areas last year would be consistent with the moderation already seen in wealthier Metropolitan areas excluding Munich. Such moderation may reflect affordability pressures and would be consistent with our view that, while German residential property prices continue to rise, near-term increases will be moderate and stable, at around 3%-4% a year in 2015 and 2016.