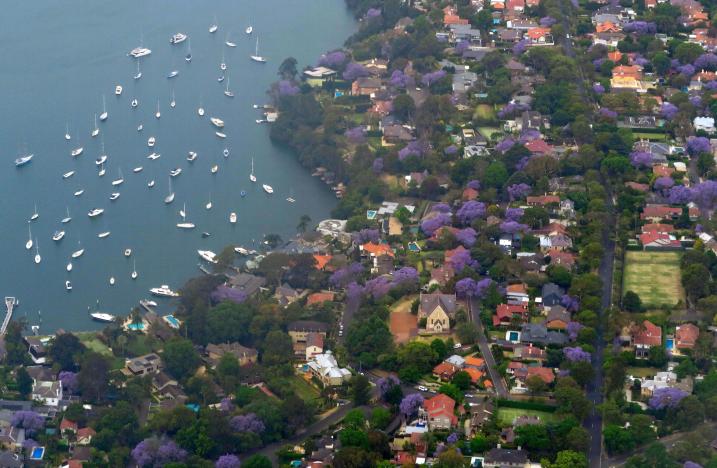 Boats are moored on Sydney Harbour near homes in the Sydney suburb of Hunters Hill, Australia, November 8, 2016. REUTERS/David Gray

Financiers and estate agents say Asian investors have found new avenues to re-enter the market, including targeting cheaper homes and settling in cash. Others are turning to groups of wealthy individuals or foreign-owned banks for loans, after Australian banks turned off funding to overseas buyers this year.

The renewed buying frenzy has re-ignited speculation that prices in one of the world’s most expensive property markets are in a bubble, alarming regulators.

“We’re now seeing people even from mid-tier Chinese cities such as Chengdu or Shenzhen coming in to Australia and buying,” David Chatterjee, director of Melbourne-based Lucror Property told Reuters. “Most of the house and land buyers that we see are cash buyers.”

The Reserve Bank of Australia (RBA) has expressed concern that a booming apartment sector could be a key risk to financial stability with interest rates now at record lows.

But Chinese buying inquiries have rebounded, up 34 percent in the September quarter for properties up to $1 million compared with 12 percent in June, according to data from Juwai.com, China’s largest international property website.

Australia’s foreign investment rules guide overseas investors to buy new properties, such as “off-the-plan” apartments that are yet to be constructed.

Foreign-owned banks including United Overseas Bank (UOBH.SI) and HSBC (HSBA.L) have stepped in to plug the gap left by the big banks, regulatory filings show.

A spokeswoman for HSBC said the majority of the bank’s mortgage book was still local Australian customers. UOB did not respond to requests for comment.

“Property developers are calling us to ask who should they approach to borrow money while investors are looking for market intelligence to be able to originate loans,” General Manager CT Johnson said.

Wealthy individuals are pooling together money to invest in Australian homes. Sydney-based corporate adviser Challis Capital this month branched into property investment after winning a A$100 million ($74 million) mandate from a consortium of Asian private investors.

Non-bank lender Pepper Group (PEP.AX) this year sealed the biggest funding deal the sector has seen in a decade when it launched a A$700 million offer of residential mortgage-backed securities.

In Shanghai, a senior executive at a family office told Reuters he was recently approached by three investment managers, asking him to invest into funds lending to Chinese homebuyers in Australia. He could not be identified due to client confidentiality.

In a world of ultra-low returns, such investments can earn up to 15 percent, according to several investors.

Median home prices in Sydney, Australia’s biggest city, have surged 10.6 percent to A$800,000 in the past year, breaking out of a mid-year lull, according to CoreLogic RP

The RBA had hoped tighter lending standards for foreigners, together with increasing supply of homes, would help cool the market but the recent rise in home prices has the central bank worried again.

It is also concerned about an oversupply of apartments in some areas, which combined with stricter lending criteria, could see delayed or failed settlements, the central bank said last month.

While driving up prices, the resurgence of Chinese buyers in could assuage recent concerns about a glut in new-build apartments.

“There is no doubt the apartment sector is probably overbuilt and there will be an adjustment there,” RBA board member Ian Harper told Reuters.

However, key affordability ratios – housing debt to home values, debt as a share of household assets – were falling, blunting the potential for contagion across the market, Harper added.

“Are we likely to see some major disruption of our current trajectory on the basis of a housing bust? Well, I don’t see that.”

Not everyone is so sanguine.

“We can safely say Australia is still very much in bubble territory,” said Amy Reynolds, strategist at Hong Kong-based hedge fund manager Apt Capital Management, who believes a correction could result in price falls of up to 15 percent.

“We don’t see how there could be a soft landing. When the bubble does burst there is going to be a shift in sentiment and things are going to move quickly.”