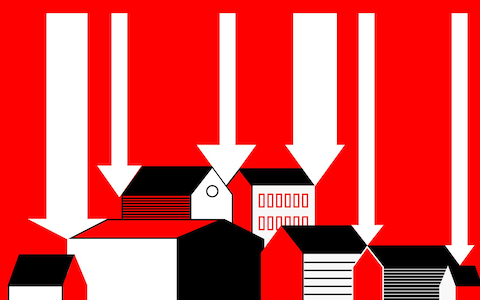 he global property boom is over as slowing growth, high prices and rising risks point to the end of the long recovery from the financial crisis, UBS has warned.

Rock-bottom interest rates have kept prices rising but the result is that buyers are stretched and are facing record low returns on investment in prime property.

Prices have run out of room to grow in many parts of the world in commercial and residential property, and the market cycle is thought to have peaked around nine months ago, the bank and wealth manager warned.

UBS’s economists suggested a crash could be avoided as long as low interest rates keep on propping up the market, while noting that banks are safer than they were before the credit crunch.

“In the past 50-60 years a typical cycle was overheating, creating higher interest rates as central banks tried to cool down the economy, and those financing costs killed the [real estate] cycle,” said Thomas Veraguth in UBS’s chief investment office.

“Now we are in a situation where interest rates are very low, so what we think is going to happen is a much more gradual downturn, so it is not a crash that we expect. We would really need a severe recession to drive a big correction, but that is not our base case.”

Retail industry property has already seen a correction, while housing markets in countries such as Canada and Australia are seen as particularly risky due to very high prices and borrowing levels.

The forecast of a gradual slowdown depends on borrowing costs staying low and market conditions remaining loose, giving buyers access the cheap credit. This is not guaranteed given that central banks have begun raising interest rates.

However borrowers, including homebuyers and the big investors who buy commercial property, have locked in lower interest rates with fixed mortgages, giving themselves some protection against a slump and supporting the market.

The findings come after the International Monetary Fund warned that housing markets in some of the biggest economies in the world were overvalued by as much as 12pc, raising fears that another property slump could trigger a recession.

Ultra-high prices in global hotspots raise the risk of a crunch in the most expensive parts of the world.

Britain includes some of the most expensive property in the world and has little room for growth unless there is a political breakthrough in Brexit talks, the UBS report said.

Société Générale global strategist Albert Edwards has previously warned that property prices have been inflated by a decade of low interest rates and quantitative easing.

As a result of the Bank of England’s response to the sudden shortage of demand in the economy following the financial crisis, the UK property market was a “bubble on top of the previous bubble”, Mr Edwards said.

The number of transactions suggested that the property cycle was “beyond its peak”, according to UBS. Property values will fall by “low single digits” in the coming quarters, it added.

There were also signs of extreme price growth in some areas, with prime London commercial property in the West End being sold at levels 30pc above 2007’s pre-financial crisis high-water mark.

A stricken retail sector, which has suffered during a torrid time for high street stores, was a particularly sore spot. There were “structural and cyclical headwinds” facing this part of the market, and a growing gulf between prime retail property, and lower quality assets in the sector.

However, cheaper lending costs and tighter regulation of how much people can borrow has made the market more resilient to a recession. The amount of debt secured on property compared to total bank debt, was at its lowest level for 17 years, the report said.

It came as mortgage lending slid in March as homebuyers awaited an outcome from the political gridlock ahead of the planned Brexit day on March 29.

The number of first-time buyers taking out new mortgages in the month fell 2.4pc on the year to 28,800, according to industry group UK Finance, making this the weakest March since 2016. This is the first year-on-year fall in six months and undermines the rising strength in the market seen earlier in the year.

Home movers also sat on their hands. New mortgage numbers dropped by more than 6pc to 25,280, the lowest March in four years, while the number of new buy-to-let loans fell 9pc to 5,000.

Those first-time buyers who did get onto the property ladder found their mortgage repayments becoming increasingly affordable.

Repayments for new buyers now amount to 16.9pc of their incomes, the lowest level in the 14-year history of UK Finance data.

This has come at the cost of longer mortgage terms. The average first-time buyer’s mortgage will last for just over 29 years, the joint-longest on record.

Article by  Tim Wallace and   Anna Isaac for ” The Telegraph ”

Tim Wallace is the Telegraph’s Senior Economics Correspondent. He has reported on business, finance and economics since 2010 and joined the Telegraph in 2015