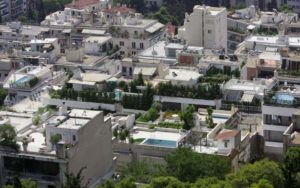 The Athens property market is evolving into something of a mecca for investors with the required cash flow, especially if they manage to acquire assets at relatively low prices.

The steep rise in foreigners’ seeking Greek properties is remarkable as Greece had not been on their radars in the years before the economic crisis: In the local market’s previous best year, 2007, the amount of foreign funds invested barely reached 310 million euros. Compare that to the 464.1 million invested during the last quarter of 2018 alone, which was higher than the annual rate before that.

Data from the Organization for Economic Cooperation and Development (OECD) showed last year that the total amount of investments in the Greek economy came to 4.25 billion euros, up from 3.6 billion in 2017. About a quarter of that – 1.12 billion – concerned the property market. Consequently, property constitutes a decisive sector for the local economy, particularly in terms of attracting foreign investment, which explains the government’s efforts to strengthen this sector further in order to make the most of the momentum.

It is estimated that the suspension of the 24 percent value-added tax on new buildings for the next three years will serve as a major magnet for foreign investments in Greece: This way foreign buyers will not restrict themselves to older buildings, but will be encouraged to seek out new constructions that will be VAT-free and will only incur a 3 percent transaction tax.

Nordea data show that 70-80 percent of the annual foreign investments in the local property market come from the European Union: The most active buyers hail from Britain, Germany, Italy, the Netherlands, France, Belgium, Spain and Luxembourg. The rest are mainly non-EU citizens, such as Chinese, Russians and Arabs, who want to obtain a five-year residence permit.