Due to the Greek economic slump, which began in 2008-2009, Real Estate faced a huge decline. For almost a decade prior to the global financial crisis of 2007–2008, the real estate market and property values increased with an impressive ratio. The main reason for this incredible performance of the real estate sector was the unlimited and easy access to cheap finance which was available both to developers, investors, and buyers. In reality, the Greek economy could not, in any possible way, sustain the level of prices and could not absorb the huge number of new properties that were constructed all over the country with a super-fast pace.

Seeking luxury standards of living and hoping for easy profits, Greeks rushed to participate in that irrational market. All interested parties and stakeholders dazzled by the amazing performance of the sector were not prepared for the downward part of the cycle and definitely not for a global recession. The 2008 financial crisis is considered by many economists as one the worst financial crisis since the Great Depression of the 1930s. It has affected each and every market around the world.

Markets backed by strong economies such as Germany or the UK faced the side effects of the global crisis but in a soft manner and recovered fast. Other countries such as Greece, Cyprus or Portugal had to face the harsh reality. Overspending citizens, weak banks, impoverished economies, heavily indebted households, and governments had to face the ugly ruthless face of the financial and capital markets.

In Greece where property traditionally was considered as one of the safest, almost risk-free investments, the impact of the property market crash was destructive, dragging almost all the sectors of the economy including the banking system into an incredible swirling fall. After several assessments on the internal and external debt of Greece, the huge increase of unemployment, the collapse of the stock market, still, no one has presented the real loss in nominal value of the real estate in Greece as an asset class during this period of recession.  By providing temporary and futureless protection of property ownership, all the governments is doing is to try and cover the huge losses of the property assets. This temporarily stops the processes of forced liquidation but property owners who cannot sell their properties won’t understand the losses they will have to face upon the sale or confiscation of their assets. It is human to forget and adjust to the new established environment in order to survive. After ten years of real estate inactivity and annual price declines, Greeks have become used to the new levels of the market. Only after a bank or a fund will auction their properties for a fraction of what they initially paid will they realize that not only they lost the asset but they still owe a fortune to the lenders.  Property owners will not understand exactly what happened and how irreversible the situation is. According to the Bank of Greece, at the end of 2017, real estate in Athens was 44% cheaper compared to its peak of 2008. However, the fall in property prices is slowing down. In 2015, the price per square meter fell by 5.3% in 2015, by 1.8% in 2016, and by only 0.9% in 2017. In quarterly terms, prices have even stopped falling – they remained constant in the last quarter of 2017. House prices finally showed a marginal increase in the first three quarters of 2018, after declining since 2008. It is true that this is a very positive sign.  There are two important elements that the report of the Bank of Greece and other reports cannot display. First, the fact that all the figures and numbers would be completely different if the market was allowed to operate properly without government intervention. That means allowing auctions to happen without any restrictions. Secondly, the last three years have seen a lot of real estate investment related to the increase of tourism. This is affecting the numbers and the market dynamics, which is not representing the correct market outlook for the residential and commercial/office properties around the country.  Another reason that we are observing a small positive change in the market is the mandatory increase of the tax values which has been implemented over the last few years. This increase is completely artificial and does not change or affect positively the market values.  The reality of the Greek property market remains misty. There are some areas such as popular islands where holiday houses show an increase in demand based on the impressive current status of Greece as a popular tourist destination in the region as well as the golden visa program. In reality, the core section of the housing and commercial market around the country is still suffering from low demand and lack of affordability as the average purchase power of the Greek family has been weakening year after year since the beginning of the recession. 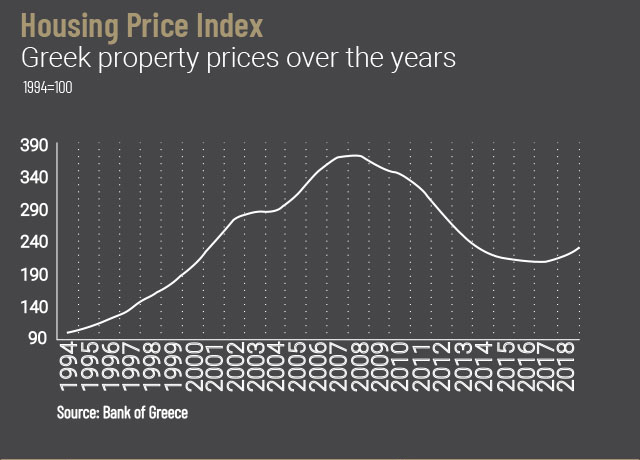 The Athens property market is undergoing a slow revival on the back of growing investor demand. According to the Bank of Greece, the number of real estate transactions in the city grew by 18% in 2017, and by 1.5 times in the first two months of 2018 compared to the same period in 2017.The increase looks amazing at a first sight. Looking dipper we will easily realize that this increase does not represent a big change in volumes and numbers as it is based on very low numbers. The property market had literally stopped completely over the last few years hitting rock bottom in each and every sector of the market.

Demand for short-term properties is buoyed by demand from tourists, so property investors that cater to this particular market have the potential of higher and constant returns. Greece is seeing a tourist boom – according to the Bank of Greece, the number of foreign tourists increased from 15 million in 2009 to 35 million in 2018, the bulk of whom visit Athens during their stay in the country, which, thanks to its well-preserved heritage and comfortable climate, remains popular regardless of the economic situation.

According to the estimates by international organizations, Athens is the city with the second-fastest rate of growth in the number of tourists in Europe while the first is Heraklion. Several property owners try to capitalize this opportunity by converting their vacant houses to short-term properties, furnished, usually operating under the radar avoiding tax and legal obligations as per the relevant legislation of the country. This sector has temporarily boosted prices in several places around the country creating positive momentum for the real estate.

After almost ten years of dormancy in the construction sector all over Greece, there is a serious deficit of newly built properties. Over the past year, especially in Athens Riviera, some new constructions are coming up. It is a fact that there is a gap in the market creating an opportunity for the specific type of properties that are needed to cover the needs of a niche market which is looking to buy modern new apartments in this specific region. Considering the fact that finance is not available in the country, we should not be expecting a general market boom or even an impressive market correction. The market in Greece is completely segmented and each segment is almost operating in the vacuum. The two main market boosters currently are the foreigners looking to buy properties in order to secure temporary residence permit via the residency by investment program in Greece, offering visa-free travel to investors and their families. The majority of these people are targeting properties of specific value located in specific areas. The other market boosters are new properties targeting a limited number of Greeks who can afford to buy property without using finance.

In the medium term, the general feeling is that the real estate market of Greece is going to face serious challenges. There is a huge stock of real estate that is in a state of inertia as banks and the state do not precede to seizures and divestments because of temporary protection measures. At the same time, there are too many properties purchased with loans that, although not yet in a state of permanent delay, cannot be sold with the current market values as the balance of the debt is higher than the current value. Shortly, one way or another, this will change. Thousands of properties will flood the market. Funds and banks will rush to sell properties at a fraction of their cost in order to recover capital and make some profits.

This will be the real sock for the Greek property market. So far, after almost ten years of recession, the majority of Greeks have not realized the real depreciation of the value of their assets. A large portion of property owners either uses or leases real estate while enjoying benefits from ownership. When these properties change hands and become the property of banks and funds, only the market will realize the magnitude of the disaster and the real consequences of this great recession.

Real estate markets require economic growth, stability and a strong banking sector ready to offer easy and cheap finance. In Greece, unfortunately, none of these three elements exist at the moment. The property market is trying to recover. The pace of the recovery will rely on the improvement of the business climate, the fall in unemployment, the durability of the growing strength of the banking sector and the simplification of the tax regime. With Greece’s exit from its bailout predicament and in view of the slowly improving political and economic climate, the country’s property market has begun to attract interest from foreign buyers.

The main reason is that the cost of buying property in Greece is still low compared to other EU countries. The current low real estate prices and high demand compared with the available stock, especially for new properties, contribute to higher returns for investors. Thus, the net yield on the short-term rent of a renovated city center apartment in Athens is 5–7 percent per annum vs 3 percent in most European capitals. As real estate operates based on a risk-return trade-off, the fact that yields in Greece remain almost double compared to other EU countries is a good indicator of the market volatility and risk.

The current levels of yields create a possible opportunity as there is potential for real estate prices to grow by 20-30 percent over the medium term. This possibility does not apply to all the market segments but mainly to new, renovated properties in prime locations. This is definitely a positive sign but it is not enough. The country has to go through many changes and a lot of turbulence before getting back to sustainable growth levels that will create a proper environment for real estate growth, stability, and opportunities.

For those who are ready to accept and take the market risk, the Greek property market offers fair risk-return trade-off opportunities in the short to medium term.