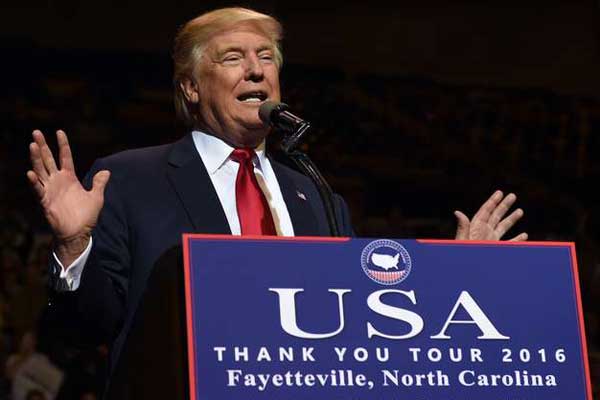 On November 9, Donald Trump was elected the 45th president of the United States. His campaign motto, “Make America Great Again”, outlined his isolationist world view, promising Americans that he will minimise all external expenditure, and thus increasing domestic spending.

He has said he will change  US policy on foreign aid and called on policymakers in Washington to tear up trade deals that do not favour the country. He will also limit engagement with the world. His government’s main financial strategy will be achieving growth and minimising unemployment.

In short, Trump intends to cut most of the money previous governments have been spending on direct foreign aid. He will also review the US’ status in the North Atlantic Treaty Organisation and the United Nations.

The US is the UN’s biggest financier, contributing 22 per cent of the organisation’s budget in 2015 and 28 per cent of the peacekeeping budget. All these  factors have an impact on financial markets and the global economies.

Adding to the pressure are the upcoming elections in Germany and France, among other key events that are creating a volatile environment. Brexit is ongoing and, of course, we should consider the new alliances being formed in East Africa, with Tanzania and Uganda being most preferred.

So how do these developments affect Kenya’s real estate market?

The real estate market is directly related to the macroeconomics of the country as well as to global social and economic developments.  Changes that occur elswhere in  the world affect the Kenyan economy and, obviously, the property market as well.

This year has seen many unexpected developments around the world. But despite the challenges and great pressure on the property market, it has remained resilient. But it seems Kenya will make it through this tumultuous year with minimum damage, and in some cases, emerge even stronger. After such a difficult year, one would expect the market to face serious problems and public opinion to be less positive. However, the general feeling is that the future of country’s real estate is bright.

The relatively stronger surge in the third quarter does not undermine the overall gradual rise, with overall house prices having risen by 13.05 per cent since the KBA-HPI base period for the first quarter of 2013. But even with the relatively faster growth, the demand and supply market dynamics have not changed significantly.

This might not be the best time to invest in real estate. With the total HPI increase over the last 40 months standing at a total of 13.05 per cent, approximately 7 per cent less than the accumulated official inflation during the same period, the market seems to be facing problems. It needs as much support as possible to maintain its current levels.

A broader financing system, an increase in foreign investments and, of course, the country’s gross domestic product are some of the things that could support the country’s real estate market, perhaps creating a more viable market. Unfortunately, the above-mentioned factors, together with the upcoming general elections, do not make for ideal conditions to  facilitate a positive trend.

The fact is that, although the county’s economy has been growing steadily in that last few years, it remains heavily dependent on foreign support. Direct US aid is extremely significant, representing approximately 1.3 per cent of the country’s GDP.

UN programmes also contribute greatly  to the country’s wellbeing and support several sectors, especially the poor. Meanwhile, as the country looks to attracting foreign investment and playing a key role in the region, there is the likelihood of a decline in US aid to Africa.

Then, following  Trump’s election, other nationalists could be elected in the big economies of Europe such as France and Germany, which will directly affect their foreign policy and, consequently, aid and investments in Africa. It is obvious that in case  of such an eventuality, the Kenyan economy will face increased and new challenges, which will put more pressure on the real estate market.

It is not just Kenya that will be affected, but all African countries. The African Growth and Opportunity Act (Agoa), which was enacted 16 years ago, aimed at expanding US trade and investment with sub-Saharan Africa. It was meant  to “stimulate economic growth, encourage economic integration, to facilitate sub-Saharan Africa’s integration into the global economy.”

But while it has not expired, it’s clear though that Trump is a protectionist who  will not tolerate an expansion or extension of the agreement.

Another factor that will affect investment in Kenya — and Africa — is that Trump plans to improve American infrastructure: he will borrow to rebuild the US  to “make America great again”. He will certainly not care whether  it comes at the expense of aid to, or trade with, African countries.

The next four years promise to test Africa’s place in the world, and even though Kenya plays a strategic role in East Africa, it will be tested too. For the well being and prosperity of the Kenyan economy, it is important for everyone in the country to understand the volatility expected in the coming months. This is a period for both action and consideration: maximize production and minimize risks.

It is extremely important to have peaceful elections in 2017. Kenya should start standing on its own feet, minimizing the possible effects of international or regional shocks. Real estate is a very sensitive sector  because it is hard to liquidate and is dependent on the financial environment, foreign investment and affordability. So people should be not be pessimistic, but rather, skeptical and alert. They should follow current affairs and market developments, peruse their portfolios, diversify them, and brace themselves for any eventuality.