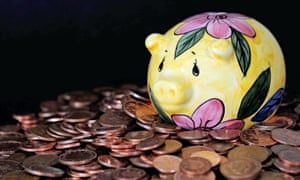 Banks tend to push through rate rises on mortgages immediately but are much slower to raise savings rates. Photograph: Nick Ansell/PA
The Bank of England on Thursday raised its base rate for only the second time in a decade, inching it up from 0.5% to 0.75%. What impact will it have on your mortgage, savings and the property market?

How will it affect me?
The direct impact on most people is minimal. Most people with large mortgages are on fixed rates, so the increase has zero impact. The proportion of borrowers with variable mortgages – which move up and down in price as the base rate changes – has fallen to only 35% compared with 70% in 2001.

Will I finally get an uplift on my savings account?
Banks tend to push through rate rises on mortgages immediately but are much slower to raise savings rates. The average interest rate on an easy access account at one of the “big five” high street providers is currently only 0.23%. The most that savers are likely to see is increases to 0.3% or 0.4%, as the banks use the rate rise to widen their net interest margin and increase their profits.

Is this just the start of many more rate rises?
Possibly but the tone from the Bank of England governor suggests the next rate rise might not be until 2019 at the earliest. Almost no one in the City expects a return to the 5% base rates common before the financial crash. Most suggest a “new normal” base rate of no more than 2% to 3% – and even then that’s unlikely for some time to come.

That said, household finances are under intense pressure, with the average person spending more than they earn, piling up debt or running down their savings. If the Bank of England raises the base rate by another 1.5%, then customers on Nationwide’s main mortgage deal will see the cost of a £200,000 loan spike to £1,055 a month; £158 more than they are paying now. That would knock a huge hole in the personal finances of many families – which is why the Bank of England is unlikely to go down that road if it can possibly avoid it.

Should I fix my mortgage for the long term to beat future rate rises?

One of the striking new developments in the mortgage market is the sudden availability of 10-year fixes at interest rates that are only marginally above the two- or five-year fixes taken out by most households. HSBC, for example, is allowing borrowers to lock in for 10 years at only 2.49% and Coventry building society at only 2.39%. Given the rising interest rate environment, longer-term fixes are likely to be much more popular this year.

What impact will it have on the property market?
In London and the south the market is in the doldrums but is more active in the Midlands and north. Expect more of the same; Brexit uncertainty, stamp duty rises and higher tax on buy-to-let is already hammering the capital’s market, so a 0.25% rate rise has little extra impact. In the rest of the country, economists are forecasting 2-3% annualised price rises.

Will the value of the pound rise and give me more holiday money?
Sadly not. Even though the rate rise has been widely anticipated, sterling remains stuck at around €1.12, marginally down on this time last summer. Unless there is a breakthrough on the Brexit negotiations, expect the pound to remain under pressure.