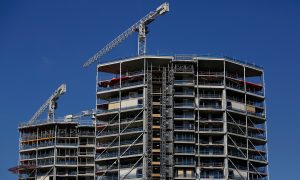 The first real signs of distress in the market for luxury London apartments are starting to emerge, as investors who agreed to buy homes off-plan are starting to sell them on for less than they agreed to pay for them.

Property websites are now advertising many unfinished flats being offered for sale by the buyers who originally agreed deals with the developers.

Estate agents and developers are generally coy about how much sellers were expecting to pay on completion, but some listings reveal that people are selling at or below the original purchase price, hoping the “bargain” price might pull in a new buyer.

This week, estate agent LondonDom.com was advertising several properties in central London for less than the original price charged by the developer. These included a three-bedroom apartment in the Battersea Riverlight development being marketed at a guide price of £1,890,000. The listing for the flat, which will not be ready to move into until 2017, described the sale as a “Hot EXCLUSIVE deal – now asking less than the original purchase price from the developer in 2013.” The listing has now been changed to describe it as “well priced”.

Another “sub-penthouse” apartment in the Riverlight development, which is part of the vast Nine Elms development area that has sprung up on the south bank of the Thames, is ready to move into and is being marketed at £1.1m – £75,000 less than the original sale price. The agent’s description read: “Urgent sale – asking now LOWER that the original purchase price of 2013, which was £1,175,000. Due completion – NOW.”

George Shishkovsky, managing director of LondonDom, insisted the sales were not a result of the UK’s Brexit vote or a fall in confidence in the market. “It’s all about people’s circumstances,” he said. “Usually people buying off-plan do so two or three years before completion and in that time circumstances can change.”

The reductions mean sellers will need to make up the difference between the price they get and that they have agreed with the developer. Shishkovsky also pointed out that the falling pound meant that overseas investors selling for less than they had agreed to pay were not necessarily making a loss. “If someone bought for £1m and is now selling for £980,000 that £20,000 will be easily absorbed by the exchange rate when they convert it back.” But the lower prices do demonstrate that the era of soaring prices seems to have come to an end.

Henry Pryor, who buys homes in London for wealthy clients, said he believed that the top end of the market had peaked and that currency gains wouldn’t make up for the fact that many flats had simply been overpriced: “Sterling-based property may be 10% cheaper for foreign buyers but much of it was 30% overpriced.” He added: “Expect to see more of this as the post-Brexit [vote] reality bites.”

Elsewhere in London, a flat in the super-luxe One Blackfriars development is being advertised for “less than the developer’s price”, and the agent selling it said that its £2.65m price tag was less than the original buyer had paid. He also cited personal circumstances as the reason for the sale.

Reports suggest there has been a sharp slowdown in the number of sales in London’s new-build market. According to research by consultancy firm Molior London, developers sold 4,600 new-build homes in the April to June period including off-plan sales, a 23% fall from the figure of just under 6,000 in the first quarter of the year.

Faisal Durrani, head of research at property firm Cluttons, said that some development projects are now likely to be abandoned. He had expected around 60,000 new properties to complete between 2016 and the end of 2018, but now says: “It’s unlikely that this will materialise, especially if the projects are yet to come out of the ground.”

Durrani said the prime central London market had been slowing for more than a year, but had been “amplified” by the referendum result. “We are at the stage where a slight correction was inevitable and may actually be positive for the market. It will help with affordability issues and may in fact help with the long stalled natural recycling times of property on the market, resulting in a more regular level of transactions,” he said.
The French bank Société Générale said last week that prices in London’s most expensive boroughs could slump by as much as 50% in the wake of the vote for Brexit.

Other agents are also listing properties in the Battersea Nine Elms area at their original off-plan sales prices. In the Capital Building in Embassy Gardens – near the new US embassy building – a ninth-floor apartment is on the market for just over £2m, with the listings stating that it is the original purchase price from 2012. Meanwhile a one-bedroom apartment over at One Tower Bridge, due to complete in September, is listed at £980,000, “below the original price of 2014”, while a two-bedder in Westminster will make its original buyer no profit if it sells for the asking price of just over £2m.

Jonathan Hopper, of property buying agents Garrington, said new-build flats were likely to “suffer disproportionately” from market falls. “A lot of investors buying in London were doing so for capital appreciation rather than yield, and with capital appreciation under the spotlight they are choosing not to buy,” he said. “Domestic demand has come to a shuddering halt and that void has not yet been filled by international buyers.” Hopper said the stamp duty changes had offset the fall in the pound and meant that London did not look as cheap to foreign buyers as during the financial crisis in 2009.

He said discounts had started ahead of the Brexit vote. “We bought [at a discount] for a couple of clients in the six months before Brexit,” he said. “The sellers were international buyers who had basically got it wrong – they thought that London was always going to keep going up and then they realised that wasn’t the case.”

Hopper said some developers were discounting in a bid to finish on sites that were already half-sold. “They have already paid for the development and it’s now a matter of how much profit they are going to make,” he said. Hopper added that buyers should beware of a “concentration of risk. If there is a large development with a multiple units they could be vulnerable to a fairly significant realignment of pricing”