London property prices are set to fall next year as uncertainty about Britain’s exit from the European Union damps the U.K. housing market, according to the Centre for Economics and Business Research 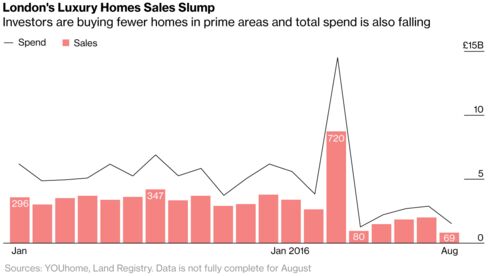 London, and especially the priciest areas of the capital’s housing market, will be most affected, with prices dropping 5.6 percent in 2017, according to the consultancy’s predictions. Across the U.K., while property value growth will accelerate to 6.9 percent in 2016, it’s set to slow to 2.6 percent next year.

“Nervousness and uncertainty are starting to show,” said KayDaniel Neufeld, an economist at Cebr. “We expect to see house-price growth across the U.K. slowing considerably in the fourth quarter of 2016, a trend that is set to continue in 2017.”

While the housing market was already facing headwinds from tax changes before June’s EU referendum, investors are becoming increasingly nervous about the possibility of a so-called hard Brexit. That could see the U.K. giving up membership of Europe’s single market for goods and services to secure greater control of immigration.

Accelerating inflation, increasing unemployment and slowing business investment are all set to weigh on house prices, while curbs on migration and a retreat from the single market could slow demand from international buyers, the Cebr said.