Over the past few years, the surge in house prices have been shocking Londoners from Shepherd’s Bush to Stratford. Many potential buyers have hoped that signs of a slowdown that emerged in the summer would continue, and so it has proved. But what is exactly a slowdown for a market that has been outperforming away blowing away all other capital cities for years ?

London’s housing prices are still increasing at one of the fastest rates in Europe , but less fast than before — This offers a very small reprieve to the capital’s exhausted house hunters. According to the latest data from the Office for National Statistics, the price of the average London home still rose by a staggering 13% in December, 2014. That’s down from a 20%-per-year pace not long ago: 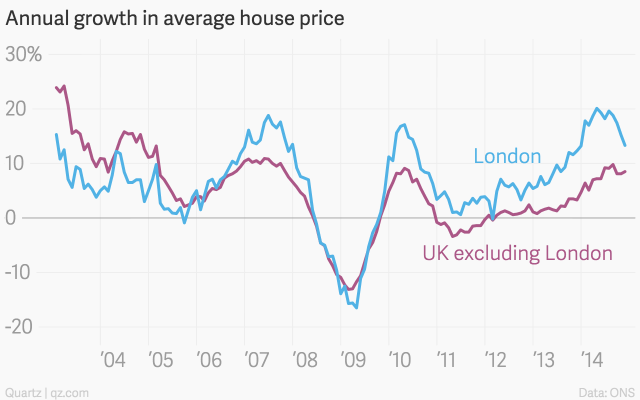 Looking ahead, many market watchers reckon that London property prices could actually fall this year—in part because they have risen so far, so fast in the recent past. Still, a 3% decline in the average London house price in 2015, (as predicted by the Centre for Economics and Business Research), will not by any stretch of the imagination suddenly make London housing anymore more affordable.

Put simply, the supply of new houses is no way keeping up with demand, which will keep prices at record highs. At the same time, weak wage growth has made it harder for people to keep up with the most modest of price increases, much less the breakneck growth of London house prices in recent years.

As a ratio to the average home buyer’s income, both prices and the size of mortgages are hovering back where they were during the bubbliest point of the pre-crisis period: 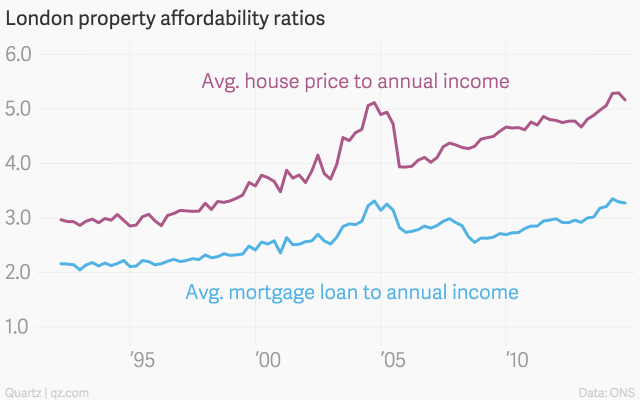 Not just London, but all of Britain is facing a chronic housing shortages – and the solution is more affordable homes. But as the latest government figures show, we’re still falling far short of building the number of new homes needed.

Although house building in the United Kingdom last year rose by 10% to 137,000 units, that figure is 25% down from the previous 2007 levels. These numbers are just over half of what housing campaigners estimate that contractors should be building to make a dent in the UK’s chronic housing shortage.

Real estate markets are always affected on the short to medium term by macroeconomics, demographics as well as political changes. The mood of buyers and vendors alike in the prime London residential market is likely to remain subdued up until after the general election in May. Uncertainty surrounding a potential mansion tax, interest rates and the introduction of capital gains tax liability for non-resident owners are also contributing to the general market angst. Moreover, a tightening mortgage regulatory environment with the European Mortgage Credit Directive due for implementation by 2016 and the Basel III requirements by 2019 on top of recent new UK rules, may see lenders become more cautious.

The UK elections, the European union member countries major financial and relationship issues, fears over a Greek exit from the euro zone, the price of oil , the Russian politics and so many other factors , do effect the market. But the UK property market has shown over the years that have very strong and solid  foundation based on its very robust and heavily diversified economy.

While the pound hits a new 7 years high against the euro and the British Chambers of Commerce is upgrading the country’s growth forecast despite slowdown in investment, a GDP of $3.002 trillion (Nominal, 2015) is expected and the flexibility of having its own currency in the “Euro Zone”, the property market was expected to slowdown . The property market especially in downtown London has reached astronomical prices and a correction was necessary. The demand for affordable housing in and around London still remains extremely high and is not forecast to change anytime soon.

The overall outlook for the market is that it remains strong. The slowdown—meaning prices are still increasing, but less fast than before will affect mainly the prime time properties down town London .The demand for housing remains extremely high in the capital’s region.Investors should be , as always , very careful before investing in any property, follow up with the market changes and consult professional property consultants in order to avoid wrong investments.