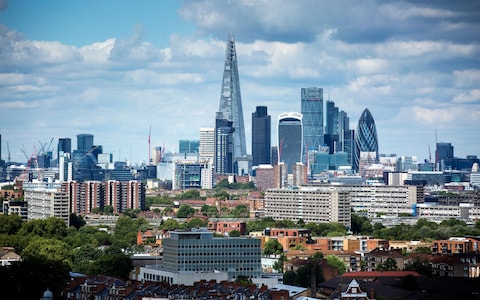 London’s property market is now worth more than £1.5tn, an increase of 1.54pc in the past 12 months, according to fresh figures released on Thursday.

Despite subdued house price growth in the capital over the past year, the market is more than twice as valuable as the combined worth of property assets in the next nine largest cities and towns in the UK: Birmingham, Manchester, Leeds, Bristol, Reading, Edinburgh, Nottingham, Sheffield and Glasgow.

Property portal Zoopla, which produced the figures by combining the value of all residential property in Britain’s top 10 largest cities, found that Bristol ranks as the second most valuable property market with a total value of £115bn, the only UK city, aside from London, to surpass the £100bn mark.

lasgow, which has witnessed one of the largest growth rates of all UK cities in the past year, follows in third place with a property market value of £90.75bn, significantly higher than the total value of Scotland’s capital Edinburgh, which comes sixth on the list with a total house market value of £68.27bn.

Within each city, Zoopla found that highly affluent neighborhoods contribute significantly more than any other to the city’s total property wealth. In the capital, property in SW1 – which covers Belgravia, Pimlico and Westminster – holds a total value of £54.57bn, which is almost as much as the entire city of Sheffield (£55.67bn).

Meanwhile, Bristol’s upmarket BS16 neighborhood – which encompasses Downend, Emersons Green, Fishponds, Frenchay and Staple Hill – tops the list as the city’s most expensive enclave with a total value of £10.1bn.

Birmingham’s B13 (covering Moseley and Billesley) the city’s most valuable area with a total value of £3.97bn, while M20 (covering Didsbury and Withington) takes the top spot for Manchester at £6.48bn.

Zoopla’s Lawrence Hall said: “It comes as no surprise that London is significantly more valuable as a residential property market than any other British city.

“However, the data does show that, in comparison to cities further north and across the Scottish border, the rate of growth in London has slowed. The capital may be worth almost 10 times more than Sheffield, but Britain’s Steel City wins in the growth rate stakes.”

Sheffield’s property market has recorded the highest growth rate (5.63pc) of any British city, followed by Glasgow (5.38pc) and Manchester (4.49pc), Zoopla found. Reading follows London as the second slowest city for property value growth with just a 2.37pc increase over the past 12 months.

Recent data from HM Land Registry and the Office for National Statistics shows that the London market shrugged off a sluggish few months at the end of 2017, with prices rising by £4,000 in December compared with a drop of £6,000 the previous month.

Nevertheless, property experts predict that overall growth in the UK property market will remain flat this year. Capital Economics has forecast that house prices will grow by 2pc in 2018, while JLL predicted that the average property across the country would rise in value by just 1pc.

The Royal Institution of Chartered Surveyors’ chief economist said the “lack of inventory on agents’ books” was continuing to prove “a major challenge”, adding that the number of valuations being undertaken was “not suggestive of a pick-up in new supply anytime soon”.

Article by   Sophie Christie  for Telegraph