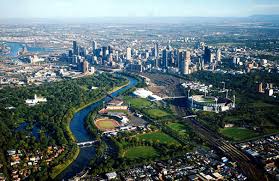 According to the latest CoreLogic RP Data capital city house price index, residential property prices in Australia’s second largest city rose by 11.0% in the 12 months to January, displacing the mantle Sydney has held for much of the past three years.

For the month, Melbourne house prices rose by 2.5%, outpacing a 0.5% increase in Sydney.

Of the other capitals, Hobart and Canberra logged monthly increases of 4.7% and 2.8% respectively while prices in Brisbane and Perth declined. Adelaide saw no change in price over the month.

Thanks to the increases in Melbourne and Sydney, Australia’s largest housing markets, capital city house prices nationally rose by 0.9%, leaving the annual increase at 7.4%.

The table below, supplied by CoreLogic RP Data, reveals the monthly, quarterly and annual rates of growth for all Australian capitals.

Despite the mixed performance in January, Tim Lawless, CoreLogic RP Data’s head of research, suggests that it’s hard to gauge the performance of individual markets given turnover typically slows over December and January each year.

“As housing market activity moves out of its seasonally slow festive period, we are likely to have a much better gauge on how the overall housing market is performing in the New Year,” said Lawless after the release of the January report.

While national capital city auction clearance rates, at 61.6%, were higher in January than levels seen in December, Lawless suggests that price growth in the year ahead is likely to slow from 2015 where prices rose by 7.8%.

“The bounce in dwelling values in January may provide an early sign that housing values across the combined capital cities are not likely to experience material decreases in 2016. We believe that the rate of capital gain across the combined capitals in 2016 is likely to be less than the 7.8% experienced in 2015, driven by a slowdown in Sydney and Melbourne and continued softness in the Perth and Darwin markets.”

Along with Australia’s labour market, many analysts are watching developments in house prices at present given the need for household consumption to remain firm to assist with Australia’s economic transition towards growth powered by services and household spending.

A significant slowdown in house price growth, or indeed a decline, will likely see the odds for further interest rate cuts from the RBA increase, particularly should labour market conditions also deteriorate.