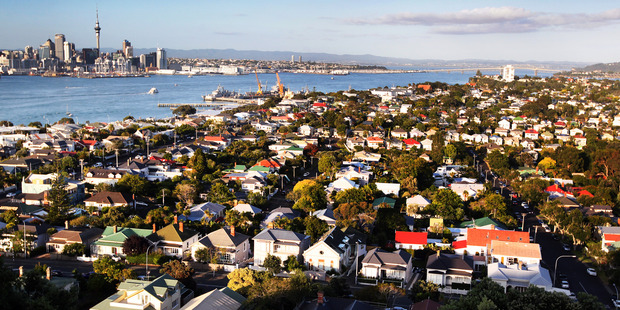 Off-the-plan homes and small properties such as townhouses and apartments are in hot demand across Auckland as entry-level buyers target more affordable options.

But latest QV figures show the city’s house values have posted the first month-on-month fall in over a year as investors drop out of the market, opening the door for first-home hunters.

Wellington region values rose 5.9 percent in the year, accelerating from a 5.1 percent annual pace in December, while Christchurch values were up an annual 2.7 percent, and Dunedin values increased 6.1 percent year on year.

Experts are also seeing more existing homeowners refinancing on the back of massive capital gain on their properties and record-low interest rates, in order to repurchase, renovate or free up cash for personal use.

“People have a huge perceived increase in the equity of their homes and it’s off to the bank they go,” QV valuer James Wilson said.

Investor demand in Auckland had tapered off during the final months of 2015, he said.

But appetite for newly-built housing and off-the-plan purchases was strong, “particularly for developments which offer smaller layouts such as attached townhouses or apartments as they offer more affordable options for buyers”.

Loan Market mortgage broker Bruce Patten reported seeing considerable activity with refinancing, new purchases and top-up financing for renovations on the back of growing equity in people’s homes. He expected the trend to continue this year, “just a little less frenzied”.

“Probably the most interesting fact is that our first-home buyers who can get finance are managing to purchase easier now because some of the traders are out of the market, and the investors are looking outside of Auckland more, which is giving the first-home buyers a look-in.”

QV figures released yesterday show average Auckland house values dipped 0.5 per cent in January to $928,921, but were up nearly 20 per cent on a year ago. The month-on-month fall was the first drop in over a year.

“The value decreases in parts of Auckland could be in part due to the seasonal impact of the holiday period and the housing market may pick up in the usually busiest months of the year, February and March,” QV spokeswoman Andrea Rush said.

“However, it’s more likely to be a continuation of the softening in the market we saw following the introduction of new rules … to curb investor activity in Auckland and the restrictions on the flow of capital out of China late last year.”