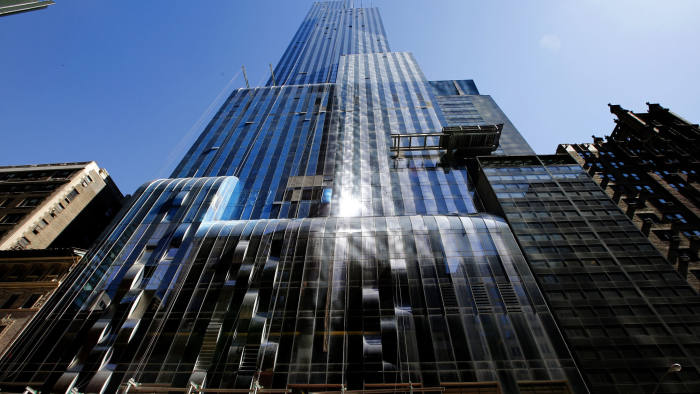 New York developers have taken the rare step of easing down payments for residential properties to entice buyers in a sluggish market. The hard-and-fast rule for those hoping to own a New York City apartment was that they must come up with 20 per cent of the purchase price in cash, a formidable barrier to entry even for deep-pocketed residents. Yet in an attempt to prod buyers in what has been a moribund market, several developers have begun to show more flexibility by either accepting smaller down payments or staggering them. One such developer is Los Angeles-based CIM, which is allowing buyers to pay 5 per cent when they sign sales contracts at two new Brooklyn projects it is marketing: Front & York in the Dumbo neighbourhood, and 111 Montgomery in Crown Heights. Another 5 per cent payment is not due until several months later.  “We saw it as one way to bring buyers into the sales gallery,” said Jason Schreiber, principal at CIM. “I don’t think anyone denies the market has been relatively slow.”

Mr Schreiber’s characterisation may be an understatement: According to Core, a New York City brokerage, median prices in the city fell 12 per cent from the same period a year earlier to $999,950. It was the worst quarterly fall since the last three months of 2009, in the depths of the financial crisis. The number of sales has also plummeted. “Scary,” is how one developer described the luxury market, particularly along the so-called “billionaires row” of new super-tall buildings on 57th street, overlooking Central Park. The chilling effect on the high end of the market came as foreign buyers retreated at the same time as New York City introduced a “mansion tax”, intended to fund the renovation of the subway system. The new surcharge came into effect in July with a one-off tax starting at 1.25 per cent on homes worth more than $2m, rising to 3.9 per cent on those sold for more than $25m. The challenge, say property executives, is that prospective buyers are well aware that the leverage has shifted in their favour. Unless they must move urgently, many see no reason to strike a deal as long as supply is plentiful and there is a possibility that prices may fall further still. Short of lowering prices, which they are loath to do, developers have resorted to enticements to try to nudge hesitant buyers. They are offering to pay closing costs and transfer charges and throwing complimentary amenities, such as wine lockers, into the bargain.

At One Manhattan Square, a development on the Lower East Side that came on the market earlier this year, Extell is offering to pay 10 years of common charges, as well as what it calls a “deferred closing programme”. Buyers make a non-refundable 10 per cent down payment and can live in their unit for up to a year before closing*. It is the equivalent, according to Sush Torgalkar, Extell’s chief executive, of effectively saving a year’s rent. Extell is also offering a “rent to buy” scheme at One Manhattan Square, with those who end up purchasing a unit having their rent deducted from the sale price.  “Demand is there. People have jobs, they have money and they have low interest rates,” Mr Torgalkar said. The problem, he noted, was that a backlog of inventory means “buyers have options.” Reducing or staggering down payments is not likely to sway that prized clique of buyers at the highest end of the Manhattan property market, for whom a $50m purchase is, as Mr Torgalkar observed, more of a “life experience” than a financial transaction. But developers are hoping it will appeal to the merely affluent, who may be spared having to come up with several-hundred-thousand dollars in cash all at once.

The risk to developers is that smaller down payment would, in theory, make it easier for a buyer to walk away in the event the market falls further. So many concessions may also constrain cash flow as they try to repay their own lenders. “It’s extremely helpful to buyers at a particular price point,” Christine Blackburn of Compass Realty, which is handling sales at 111 Montgomery, said of the staggered down payments, which she called “very unusual”. While business is still robust in the sub-$1m category in New York City, Ms Blackburn noted, there is a particular glut of product in the $2m to $3m range. “I hear similar phrases from buyers that I heard in late 2008 and early 2009,” she observed. “People think there’s a better deal around the corner.”