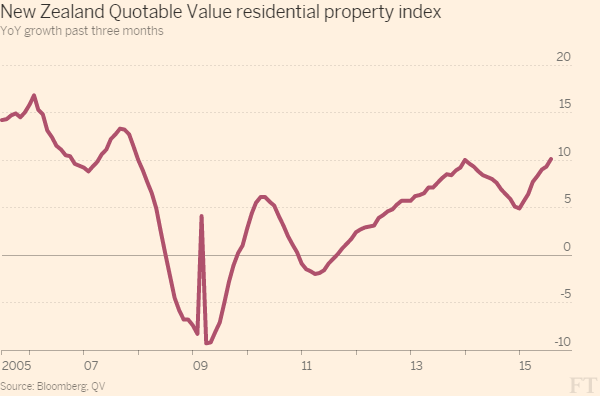 There’s just no let up in New Zealand house prices, with prices rising at their fastest pace since 2007.

The July reading was the fastest pace of price growth since November 2007. That’s an auspicious time, given it’s when global sharemarkets hit their peaks before the onset of the financial crisis. But maybe don’t read into it too much, because NZ house prices were rising by 14, 15, 16 per cent in 2005 and 2006, which happens to be as far as the survey goes back.

Nonetheless, it’s a fast pace of growth at a time when the economy looks sluggish. The Reserve Bank of New Zealand in June cut interest rates for the first time since March 2011, and backed up with another cut in July, taking the cash rate to 2.75 per cent in a bid to support economic growth as prices for dairy products, the country’s main export, tumble.

But low rates have only fuelled the housing market. Price growth in Auckland remained the strongest, with prices up 20.1 per cent in the three months to July 31 from a year earlier. The next best rate of growth was 7.4 per cent in Hamilton, which only highlights the disparity between the country’s most populous city (Auckland) and everywhere else: prices rose just 2 per cent in the capital, Wellington.

The Reserve Bank of New Zealand in May tightened loan-to-valuation ratio (LVR) restrictions for the Auckland housing market, which has been particularly frothy. Effective on October 1, borrowers in the Auckland council area will have to put down a deposit of at least 30 per cent; outside of Auckland the LVR will be 15 per cent deposit (up from 10 per cent). One possibility might be that prices are running hard ahead of that change.