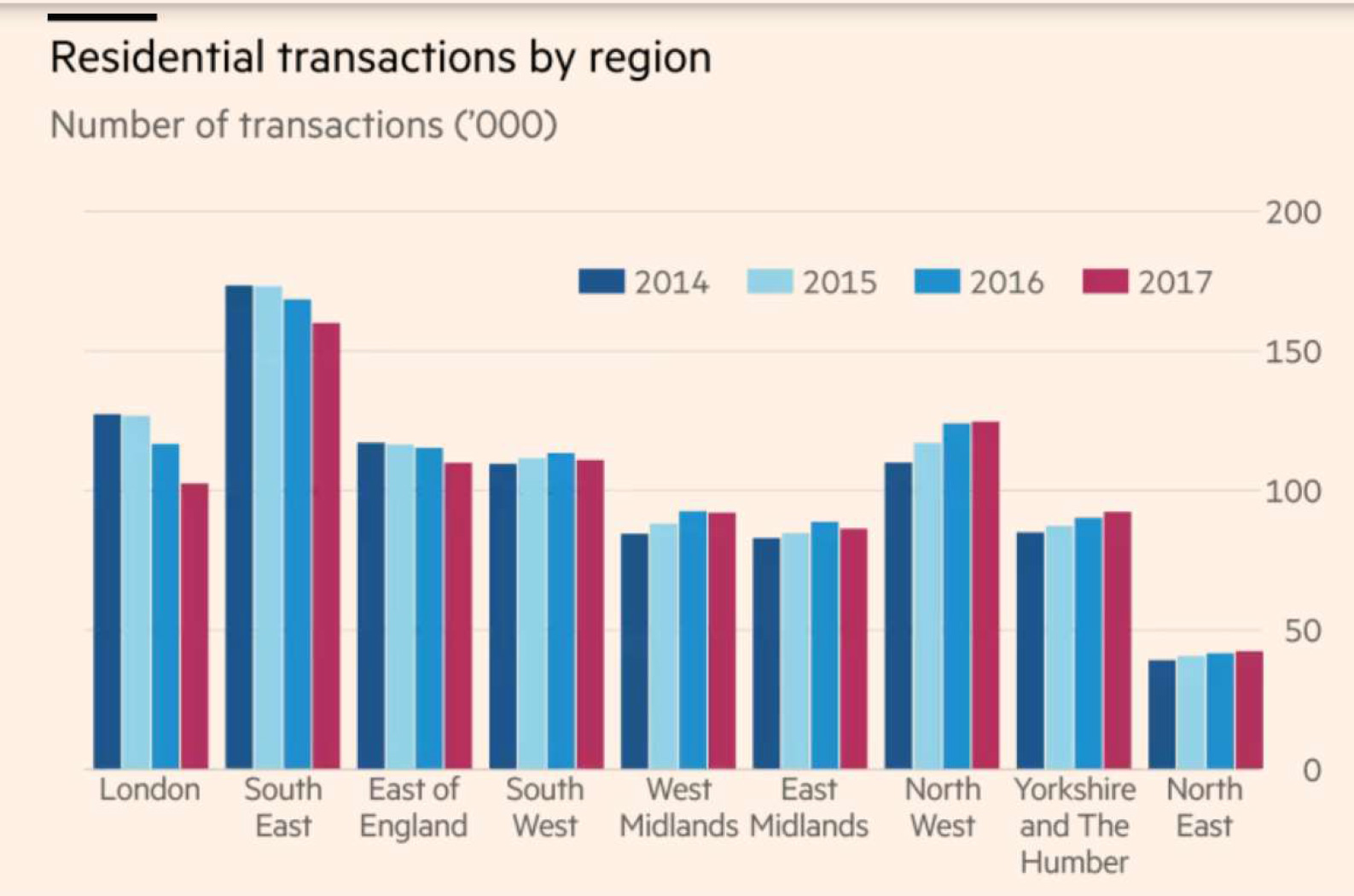 The number of homes changing hands in London has dropped by one-fifth in four years, while homebuying activity in the Midlands and the north of England has picked up the pace, underlining problems of affordability in the capital and changing patterns of regional housing demand. Research looking at the level of transactions from 2014 to 2017 found the number of property sales in the capital had fallen 20 per cent over the four-year period. However, transactions were up 13 per cent in the North West, and 9 per cent in both the West Midlands and Yorkshire and the Humber. Other regional markets that experienced soaring price growth in recent years — notably the South East and East of England — also saw a drop-off in activity, of 8 per cent and 6 per cent respectively. Neal Hudson, director at Residential Analysts, the market research firm that produced the figures using Land Registry and HM Revenue & Customs data, said: “We’ve hit a point where London is unaffordable for all but the most equity-rich of buyers. That is combined with some of the tax changes that have affected the central London market. Affordability is less stretched in places like the North West.” The high price of property in London and the South East means buyers in these regions will be caught by stamp duty changes imposing significantly higher levies on the most expensive homes. Rates are even higher for those buying a second home or buy-to-let property, while landlord investors also face new constraints on growth from regulatory and tax changes. Mr Hudson said that while prices had dropped in some parts of London, there was “no trigger” for a deeper collapse in prices across the capital, partly because mortgage rates remain low by historic standards. “I’d be surprised to see the overall London region see significant price falls. It’s a very diverse market. There will be some areas that are still rising and some falling.”

Nonetheless the risks of falling prices remained high in localised markets, he added, particularly new luxury housing developments such as Nine Elms on the south bank of the river Thames. “There’s an awful lot of stock coming through there that could make it quite interesting,” he said. Research by York University last year suggested foreign buyers of these homes were no strangers to housing debt: more than half of overseas buyers of new-build homes had used mortgages to fund London purchases, it found. The shifting picture of regional demand was reinforced by separate research from housing market analyst Hometrack, which found the gap between asking and selling prices was widening in the south of England while narrowing in large regional cities in the north and Midlands. Birmingham and Manchester have seen the difference more than halve from 6 per cent in 2013 to 2.7 per cent last year, Hometrack said. Discounts in London are an average of 4 per cent (or up to 10 per cent in central London) compared with 0.4 per cent four years ago. London’s weak house price growth has been reflected in a similar slowdown in cities such as Oxford, Cambridge and Aberdeen. Richard Donnell, director at Hometrack, said that once discounts on asking prices reached 10 per cent, headline prices were likely to start falling. “These results confirm our view that the housing market is following the pattern registered in previous housing cycles with high rates of growth in London over the first half of the cycle being followed by low growth and an acceleration in regional housing markets as prices recover off a low base. We appear to be at this transition period once again.” Mr Hudson said his figures for 2017 were created using HMRC transaction figures, combined with regional shares for Land Registry for January to November. They may be adjusted in the months to come as Land Registry data are updated. “Any adjustment is unlikely to change the overall story, though,” he said.