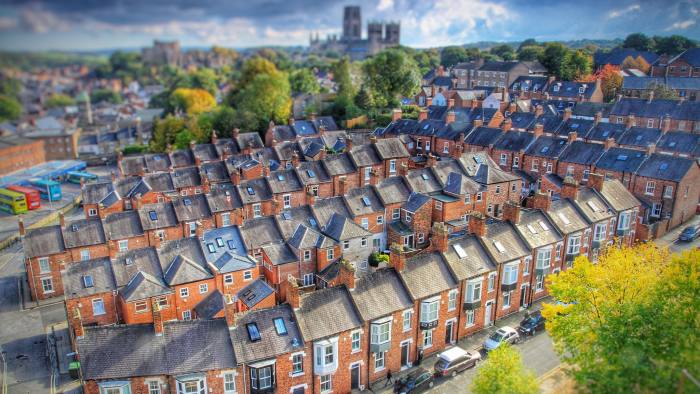 UK property speculators who buy and sell homes in quick succession have shifted their focus north as the housing market in London and the south-east begins to slump. Some 11 of the top 15 destinations for “flipping” homes — buying and selling within 12 months — were in the north of England last year. None of the top 15 were in the capital, in contrast with preceding years. House price growth in London slowed almost to a standstill in 2017, and moved into negative territory this summer. But in the regions house prices are rising. The top destination for “flipping” was Burnley in Lancashire, where more than 6 per cent of all homes sold in the year were rapidly sold again, according to an analysis of Land Registry data by Hamptons International, a division of Countrywide. Burnley remains the cheapest local authority in England in which to buy a home: the average property costs £81,352. But a less buoyant nationwide market offered speculators fewer opportunities for a quick profit and they reduced the total sum they committed to houses for rapid sale. Some £4.1bn worth of homes were sold at least twice in a year in England and Wales in 2017, down £200m from the previous year. A stamp duty surcharge of 3 per cent of the price of second and additional homes, introduced in April 2016, has also discouraged some speculators, said Aneisha Beveridge, research analyst at Hamptons. “Some northern areas are more resilient. Lower property prices mean that some of the homes bought by flippers fall under the £125,000 stamp duty threshold,” she added. Recommended UK property Is UK property still a good investment The analysts found that 18,085 homes, or 2 per cent of all residential properties that changed hands in England and Wales in 2017, were sold again within a year. Buyers who “flip” homes seek to take advantage of rapid house price growth, though they may also carry out some improvements to the property. The most popular destinations after Burnley were Middlesbrough, Redcar and Cleveland, and County Durham. By contrast, three years earlier, the top 15 destinations included Kensington and Chelsea, London’s most expensive borough, where runaway house price growth combined with already high prices to create easy profits for speculators. The average home there now costs £1.2m, even after an annual drop in prices of almost 14 per cent. “Price growth in the north will continue to outpace prices in the south, as these are the areas worst affected by affordability pressures,” Ms Beveridge said. Levels of property speculation since the financial crisis have not equalled those of the early 2000s, when a 13 per cent annual rate of house price growth resulted in more than £6bn of “flipping” annually for six consecutive years.

for the financial times : Read the full story here  FT