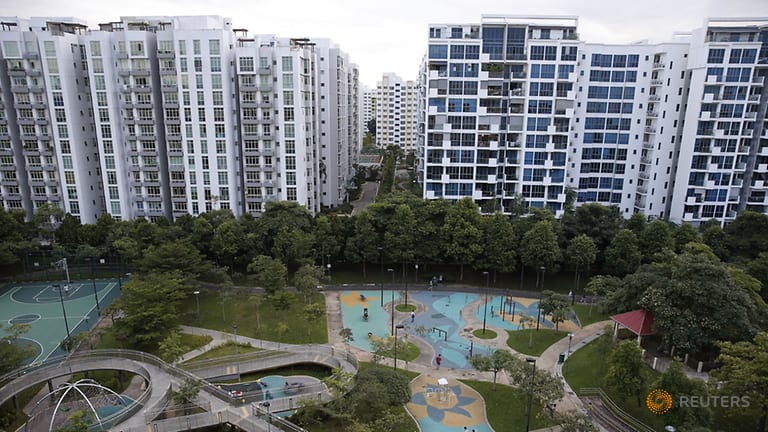 SINGAPORE: Singapore’s property market faces “potential downside risks” from a large supply of unsold units in the medium term and an uncertain economy, said the Monetary Authority of Singapore (MAS) on Thursday (Nov 28).

In its annual Financial Stability Review, the central bank urged prospective buyers, especially households that are highly-leveraged, to be mindful of risks and remain prudent.

Property firms that have built up high levels of leverage and hold large unsold inventory should also exercise prudence, it added.

“Ongoing uncertainties in the economic outlook and a softening labor market could negatively affect households’ incomes and their demand for property,” MAS wrote.

Already, hiring sentiment has turned cautious amid the growth slowdown, with fewer job vacancies than unemployed persons. It also noted that the number of workers placed on short work-week or temporary layoff has trended upwards, even as retrenchments remained low.

“Amid the possibility of an extended period of sluggish GDP growth, wage increases are expected to ease, which could weaken households’ debt servicing ability,” MAS said.

There is also further housing supply coming on stream, even as the stock of launched but unsold units builds up.

Figures from the report showed unsold units from launched projects, excluding executive condominiums, doubled to 4,377 units in the third quarter. This compares with 2,172 units the same period a year ago.

This increase is likely be exacerbated in the medium term, MAS said, as developers redevelop and launch projects on the flurry of en bloc sites sold between 2017 and 2018.

The central bank warned that having more unsold inventory “could place downward pressure on prices in the medium term, if unaccompanied by a corresponding rise in demand”.

These concerns come against the backdrop of a moderation in the private residential property market following the cooling measures introduced in July last year.

Price movements have moderated in the quarters since then and compared to the first half of 2018, they are now more in line with economic fundamentals, MAS said.

Compared to the year preceding the cooling measures, overall transaction volume in the last four quarters was 32 per cent lower as resale activity continued to be muted.

While relatively healthy developer sales were observed in selected project launches in the past two quarters, MAS said this was largely due to project-specific features, such as a good location. Other projects saw moderate sales in the initial phase of their launches.

Developers have been more cautious in their bidding for land, while en bloc activity has also slowed significantly with only one project successfully sold since the third quarter of 2018, it noted.

The mortgage servicing ratios for the median household remain below 60 percent under a severe stress scenario of a 10 percent fall in income and a 250-basis-point increase in mortgage rates.

However, lower-income households that have purchased private properties could face increased stress as their mortgage servicing burdens rise above 70 percent.

Given the downside risks, MAS said prospective buyers “should be mindful of their ability to service long-term mortgage obligations and be cautious in taking on new commitments to debt-financed property and other large purchases”.

“Highly leveraged households would be more susceptible to stresses in macroeconomic conditions, and need to build up financial buffers while ensuring that the debt servicing burdens remain manageable,” it added.

Property firms that tend to take on higher leverage due to the capital-intensive nature of the industry will also need to be vigilant.

“They should take the significant increase in the upcoming supply of private housing units over the medium term into account in their business and financial planning,” it said.

Overall, the central bank noted that Singapore’s household balance sheets have strengthened alongside an increase in net wealth, with liquid assets such as cash and deposits exceeding total liabilities.

Leverage risk also moderated as the growth in household debt slowed. The latter, according to MAS, is partly due to last year’s cooling measures that led to a slower pace of housing loan growth.

In its 65-page report, the central bank also urged companies and banks to be on guard despite its stress tests showing that the system can withstand external shocks.

Risks to global financial stability have risen amid a challenging macroeconomic backdrop, it warned.

“Singapore corporates, households and banks should remain vigilant given increased uncertainties and expectations for prolonged sluggishness in global growth,” the central bank wrote.