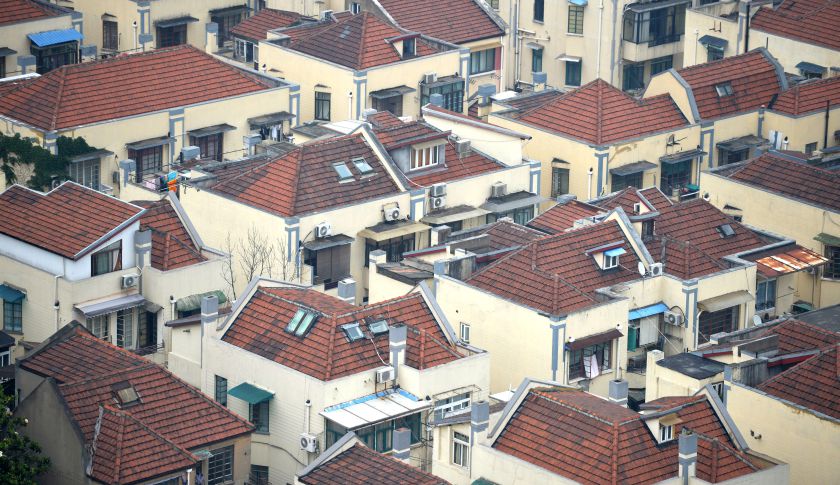 A view of low-rise residential properties in Shanghai on June 11, 2013. Home prices in major Chinese cities continued to rise year-on-year for the sixth consecutive month in May, an independent survey showed, with the average cost of a new home in 100 major cities rising 6.9 percent from a year earlier to 10,180 yuan ($1,647) per square metre in May compared with 5.34 percent growth in April, the China Index Academy said in a statement. AFP PHOTO/Peter PARKS (Photo credit should read PETER PARKS/AFP/Getty Images)

But there’s also concern that the market could overheat in big cities.

China’s home prices rose at their fastest clip in almost two years in February, thanks to red-hot demand in big cities.

Average new home prices in 70 major cities climbed 3.6% in February from a year ago, quickening from January’s 2.5% rise, according to Reuters calculations based on data released by the National Statistics Bureau (NBS) on Friday.

That was the quickest year-on-year increase since June 2014, and encouragingly, 32 of 70 major cities tracked by the NBS saw annual price gains, up from 25 in January.

Ordinarily, that should be welcome news for policymakers who have rolled out a raft of stimulus measures to support an economy growing at its slowest pace in a quarter of a century.

In February, the People’s Bank of China had slashed minimum down payments for property to 20 per cent in most cities, the lowest in eight years. That and other similar measures have boosted demand and pushed up home prices during the Lunar New Year holidays.

But the divergence in price trends—surging in bigger cities and depressed in smaller ones plagued by a supply glut—makes Beijing’s job harder as it looks to reanimate growth without inflating asset bubbles.

“The government’s all-out encouragement of housing sales seems to be working, but at the cost of surging prices in big cities,” said Rosealea Yao, an economist at Gavekal Dragonomics in Beijing. “These surges in big cities are not sustainable and would increase uncertainties and instability in the overall housing market.”

The data showed tier 1 cities, including Shenzhen, Shanghai and Beijing, remained the top performers, with prices surging 56.9%, 20.6% and 12.9% respectively.

The trouble is that speculators and ordinary investors, who have been shaken by the summer crash in mainland stock markets, are increasingly plowing their money into the housing market—most of it going to the frothy sector in big centers.

A breakdown of NBS data showed that a slew of government measures and increased lending has failed to arrest persistent softness in property markets in smaller cities where a glut of unsold houses have weighed on prices. Most third-tier cities still saw on-year prices drops in February, though the declines eased from the previous month.

But signs that some places may be overheating even as prices remain depressed in smaller cities complicate matters for policymakers. Senior Chinese officials raised alarm over the country’s overheated housing market during an annual parliament meeting this week.

In an effort to deter speculation, some officials have suggested the release of more public land for sale in areas with the hottest price rises, while others have vowed to crack down on players illegally lending home-buyers to make downpayments.

While fears of a hardlanding for China’s economy have abated in recent weeks, Beijing cannot afford a housing market crash in the big cities given that the real estate industry and related investment activities account for 15 percent of gross domestic product. The Communist Party has just committed itself to keeping annual GDP growth above 6.5% for the next five years.