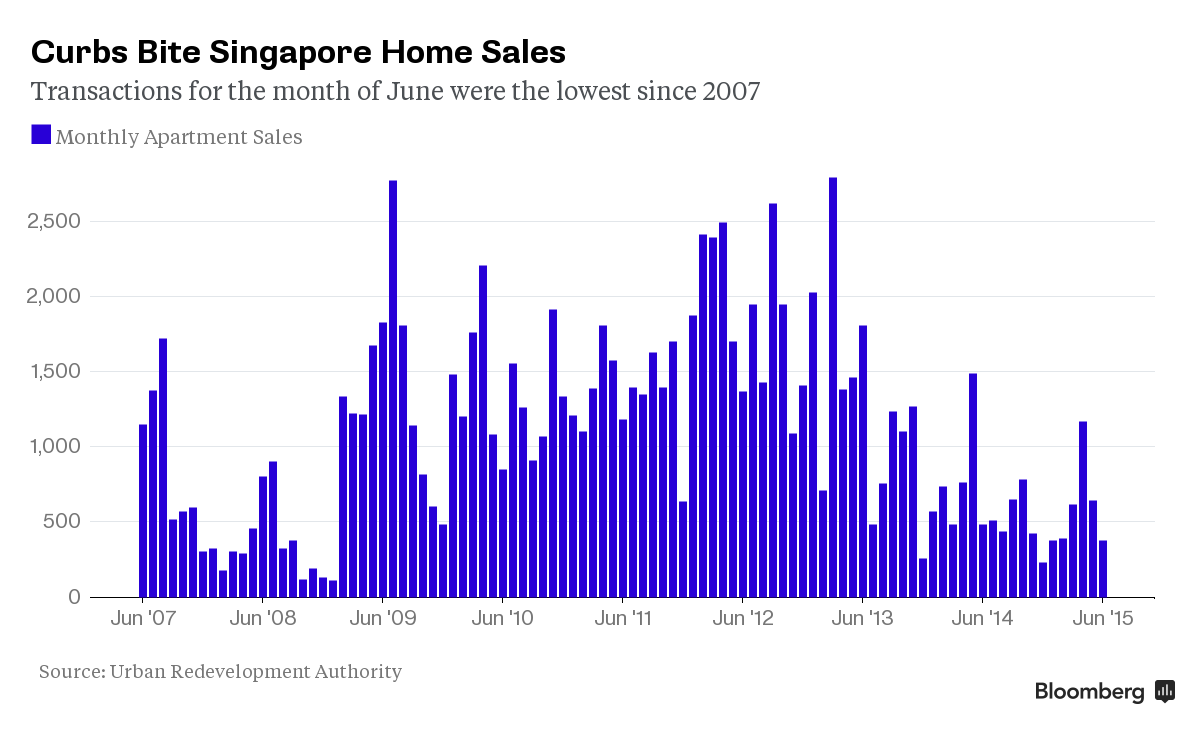 The latest housing data point on Wednesday showed home sales slumped 42 percent in June from a month earlier to the lowest this year — fueling concerns of further declines in prices that have already recorded the longest losing streak since 2002.

“The momentum is very weak, it doesn’t bode well for the residential market,” said Alice Tan, Singapore-based head of consultancy and research at brokerage Knight Frank LLP, who predicts housing values may drop as much as 5 percent in both 2015 and 2016.

The latest decline in sales and prices reflect the government’s residential property curbs since 2009 to combat low interest rates that drew demand from foreign buyers. The measures intensified over the years to include a cap on debt repayment costs at 60 percent of a borrower’s monthly income and higher stamp duties on home purchases.

Home sales last month dropped to just 375, about half the level Tan said is needed for a “healthy market.” That’s also the lowest number of transactions for the month of June based on data going back to 2007.

Housing transactions slid as builders held off new housing projects, leaving only a handful of developments being put up for sale.

There are no clear signs that the property cooling measures will be relaxed anytime soon. Any easing will depend on factors such as the state of the economy and the outlook for wages, Channel NewsAsia reported, citing K. Shanmugam, Singapore’s law and foreign affairs minister, at a real estate conference last week.

Residential prices have declined 6.7 percent since the September 2013 peak. They fell 4 percent last year, the first annual decrease since 2008. Knight Frank’s Tan says she expects the government to relax some curbs only after housing values have dropped more than 10 percent.

Singapore’s economy has also worsened. Gross domestic product contracted 4.6 percent last quarter, more than analysts predicted, underscoring the weakening outlook for the Asian nation amid sluggish global growth. The contraction is the worst since the third quarter of 2012, according to data compiled by Bloomberg, which in turn is expected to further damp home sales.

Adding to slowing sales, borrowing costs have been going up. The three-month Singapore interbank offered rate, against which most home loans are benchmarked, has risen to 0.8204 percent this year, almost double the 0.4570 percent at the end of December.

“Some buyers are reticent to make a purchase now, when home prices could be lower in six to 12 months’ time,” said Chia Siew Chuin, director of research and advisory at Colliers International.

The index tracking Singapore developers rose 0.4 percent as of 3:57 p.m. local time. The gauge added 3.7 percent this year, compared with the 0.3 percent decline in the Singapore benchmark Straits Times Index.

“Developers will continue to take a restrained stance on new launches, as homebuyers are expected to persist with a wait-and-see attitude,” she said, estimating 19,359 new homes to be completed between 2015 and 2019.

The measures have led developers to predict a bleaker outlook for the housing market. CapitaLand Ltd., Singapore’s biggest developer, said in April it expects prices to “further moderate” in 2015 with the curbs, while its biggest rival City Developments Ltd. said in May “market players have generally turned cautious.”

“The progressive build up of oversupply will not abate in the short term and we can expect the recovery will not be a quick one,” Augustine Tan, president of the Real Estate Developers’ Association of Singapore and an executive director at Far East Organization, the city-state’s biggest closely held property company, said at a conference this week.

“Developers will have to ride out this difficult period as the market takes its course,” he said.