House prices in Sydney have recorded their sharpest downturn in more than two decades, falling by 10% in the past 12 months.

The latest report from Domain Group for the fourth quarter of 2018 has revealed Australia’s housing market has continued to slow, with national prices recording the steepest annual fall in 15 years while Sydney house prices are back to mid-2016 levels.

One leading economist signalled there was even worse to come for Sydney and Melbourne. Shane Oliver, chief economist at AMP, revised his forecastfor prices in the big two cities and now thinks they could fall 25%, citing the plunging auction clearance rate and accelerated price falls late last year.

But while the continued downward trend in the harbour city’s overheated housing market will give hope to first-home buyers, the median house price in Sydney remains above the $1m mark first set in 2015.

Prices in Sydney have now fallen by 11.4% since their peak in mid-2017. It’s only the second time since Domain began keeping records in 1993 that prices in the city have fallen for four consecutive quarters. 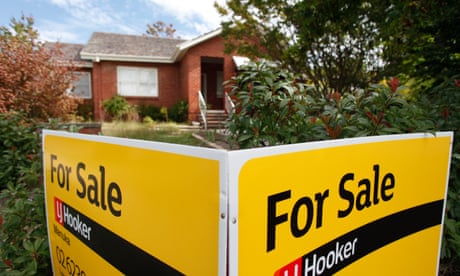 Australian house prices falling at fastest rate in a decade

“The depth of Sydney’s current house price downturn is the sharpest in more than two decades, although the duration is yet to surpass the 2004-06 slump,” Domain’s senior research analyst Nicola Powell said.

However Powell said the downturn was not unexpected. The almost six years of price growth, coupled with changes to macroprudential lending policies that tightened lending restrictions, meant the market was less crowded by investors.

“Affordability is improving in the harbour city,” Powell said.

“First-home buyers have fewer investors to compete against, greater choice and a wider window to make their purchase. This also provides opportunity for the upsize buyer.

“It may mean selling at a lower price point compared to the boom, but if buying and selling under the same market conditions, it is likely to be offset by a more affordable upsize purchase.”

Powell said while lending restrictions had hit Melbourne and Sydney the hardest, Melbourne was in “better shape” thanks to a “growing employment sector, lower affordability hurdles and stronger population growth supporting the underlying demand for housing”.

While Adelaide saw 1.7% growth over the last year, Hobart continued to buck the national trend by recording an 8.8% rise over the last 12 months.

Powell said while the city remained the most affordable capital in Australia, if it continued to grow it could soon outstrip Adelaide and Darwin.

“House prices have had a record period of growth, rising for 11 consecutive quarters,” she said.

“Hobart continues to be the standout performer for capital gains, bucking the national downward trend. However, even though the city continues to record growth, the pace has slowed from the peak rate of growth recorded at the end of 2017 and early in 2018.”

The latest falls in the national market follow a steady decline since the end of 2017, which saw the Deutsche Bank last year identify a potential Australian housing crash as one of the top 30 risks to the global economy.