The entry-level housing market may be on the upswing.

The pace of new construction is one of many gauges of the state of the current housing market, along with home prices and the volume of sales. Moreover, the kinds of new homes under construction can tell us about the health of the housing recovery. The types of new homes presently being built suggest that housing growth continues, with initial signs of optimism for one of the market’s key weaknesses in recent years: lack of first-time buyers.

A persistent challenge for housing during the post-recession period has been reduced and delayed levels of household formation. This has had a particularly strong effect on demand for owner-occupied homes. Even when new households have formed among younger individuals and families, they are more likely to form and remain as renters for longer periods of time than prior generations.

As a result, builders of new single-family homes have constructed homes for the demand that exists, which has been disproportionately higher-end buyers, who are more likely to have savings for a down payment and the income necessary to support a mortgage. This change in the market mix for new homes is clearly seen in Census data reporting the typical/median new home size. 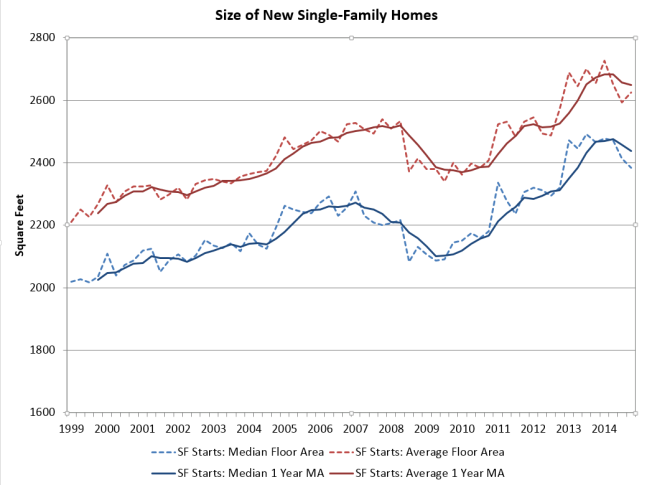 Coming out of the recession, the typical size of a newly built single-family home rose approximately 16 percent to 2,438 square feet (on a one-year moving average median basis) as of the fourth quarter of 2014. This increase occurred due to a shift away from entry-level housing. However, that rise in size appears to have ended in 2014. In fact, the typical newly built home in 2014 (2,414 square feet) was smaller than the 2013 estimate (2,460 square feet).

It’s worth repeating – these changes in new home size are reflections of market mix, rather than significant changes in homebuyer preferences. Consequently, the 2014 data suggest a new dynamic may be on the horizon, with increasing numbers of entry-level buyers entering the market. As these prospective buyers appear in greater numbers, expect the median size of newly built homes to fall as the market mix shifts back to a more normal composition of buyers.

A key subsector to watch as more of today’s renters seek to make a new home purchase will be the townhouse market, often a source of supply for first-time buyers choosing new construction. The pace of townhouse starts picked up at the end of 2014, coming in 12 percent higher than the final quarter of 2013. While the overall total of townhouse starts in 2014 (72,000) was only slightly higher than the prior year total, the post-recession trend has been one of growing market share of overall single-family starts. This will continue as more first-time buyers purchase new homes. 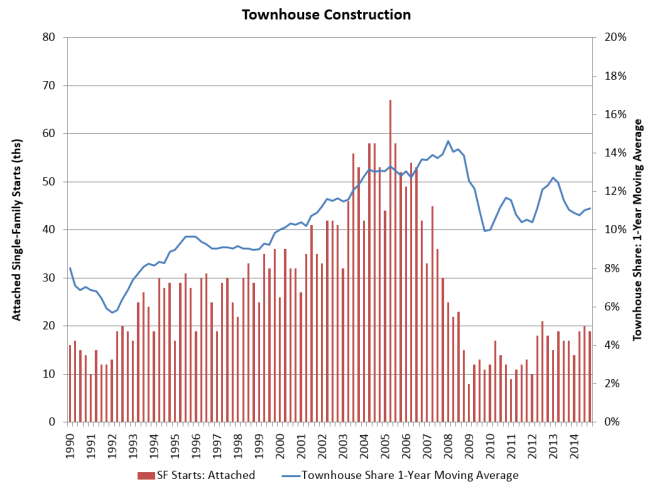 Besides townhomes, for-sale multifamily apartments should be a source of growth as younger buyers come to the market. As with single-family construction, there are hints that developers of multifamily housing are expecting more first-time buyers in the near future. For similar reasons to the increase of new single-family home size after the recession, the median size of multifamily units fell in recent years as the apartment market became more heavily focused on rental housing.

However, at the end of 2014 the average size of new multifamily units (on a one-year moving average basis) jumped 3 percent to more than 1,300 square feet. This was due to a particularly large increase for average new multifamily residence size in the final quarter of 2014 (1,355 square feet). It is likely that this increase was a result of more, for-sale multifamily being constructed. In fact, according to the Census data, the for-rent market share of multifamily fell from 93 percent of all starts in the third quarter of 2014 to less than 90 percent at the end of the year. An 80 percent rental share was the average over 1980 to 2002, so clearly the market remains tilted toward rental production, but 2015 could see more change to historical patterns.

It is important to not form definitive conclusions from one quarter’s worth of data, but when combined, the overall pattern of data for various construction submarkets from the end of 2014 suggest that we may see an expansion of the entry-level market in 2015.

Ultimately, for the entry-level housing market to expand, the economy needs to continue producing new jobs. The labor market has been performing relatively well recently, with the last quarter of jobs data averaging 288,000 new positions a month and a headline unemployment rate of 5.5 percent in February. Income gains for younger households would also be a positive factor for the for-sale housing market in the year ahead. Mortgage rates remain low, but to benefit from low rates, one must be able to qualify for a mortgage.

And because housing – and real estate in general – depends on the efficient operation of debt markets to finance purchases, policymakers should be aware of potential harm that could come from changes in finance and tax policy. For example, some analysts believe that business-focused tax reform could occur, or at least be seriously debated, in 2015.

Among changes that have been debated as possible revenue raisers in tax reform would be elimination of interest deductions for businesses and the tax code’s like-kind exchange rules. Elimination of either of these tax rules would restrict the development of new housing going forward, by raising the cost of financing for construction and restricting the flexibility of land markets to prepare lots for future construction. These changes in turn would increase the cost of home buying for entry-level buyers, just as the market is showing initial signs of expansion for this missing element of the housing recovery. using market may be on the upswing.