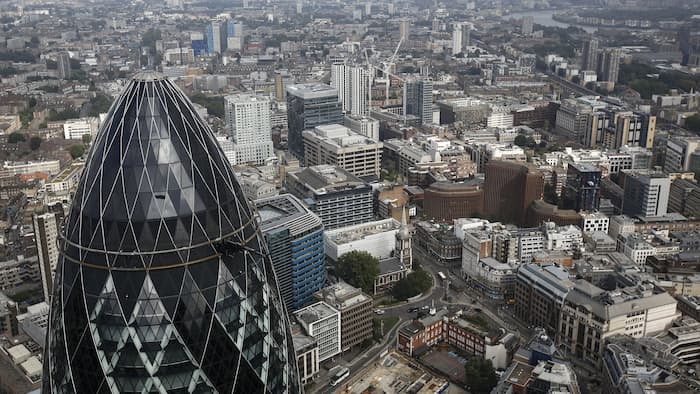 Investment into UK commercial property slumped to its lowest level in two years and prices for British real estate began to fall during the period right around the country’sreferendum on EU membership.

Investors bought £9.8bn of property during the second quarter of 2016, an 18 per cent drop from the previous quarter — when volumes were already depressed — and 45 per cent down on the same period a year earlier.

At the same time, prices began to decline: yields, which move inversely with prices, increased by 15 basis points, their first rise in two years, according to figures from Lambert Smith Hampton, a commercial estate agency.

UK-based institutional investors became net sellers of British property during the quarter as they sold £1bn of assets, according to the first comprehensive numbers on UK real estate investment during the referendum period.

The Brexit vote had a rapid impact on the commercial property market in the aftermath of the June 23 vote, as several major deals fell through and seven property funds were forced to halt withdrawals in the face of large redemptions.

Lambert Smith Hampton, which is part of the listed property agency Countrywide, now predicts an 11 per cent drop in commercial property values during 2016.

However, Ezra Nahome, the group’s chief executive, said “cooler heads have begun to return” to the market after the heightened uncertainty of the referendum period.

“The fall in values that we forecast for the remainder of the year is magnified by our position in the investment cycle,” he added.

“Values have been stretched across a number of sectors for a while, especially in Central London, so the referendum result has arguably accelerated the return to fundamentals that would have happened anyway.”

Investment demand saw its biggest slump on record from the first to the second quarter of 2016, according to separate findings from the Royal Institute of Chartered Surveyors which act as a leading indicator on the market. 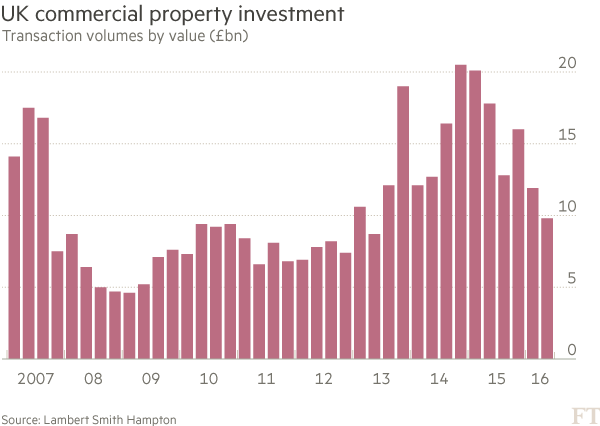 The net balance of surveyors seeing an increase in investment inquiries fell to a negative 16 per cent from a positive 25 per cent in the first quarter, according to the Rics survey, which was carried out after the June 23 vote.

Most surveyors predict price falls in the next 12 months. Rics said. Across the UK, the largest group of respondents — 36 per cent — believed the market was in the early stages of a downturn.

Investment in Greater London commercial property reached its lowest levels since 2012 during the second quarter, at £4.3bn, Lambert Smith Hampton said. The funds committed to “alternative” property across the UK such as student housing plunged by 74 per cent from a year earlier to £1.2bn.

But despite concerns over the effects of Brexit on the London office market, investment into office properties in the capital actually rose during the second quarter to £3.1bn from a four-year low of £2.2bn in the first three months of the year. This was still below the 10-year quarterly average, however.

“The correction in real estate pricing is expected to be largely restricted to the next 18 months”, with yields increasing by 40 to 50 basis points by the end of 2017, the company predicted.