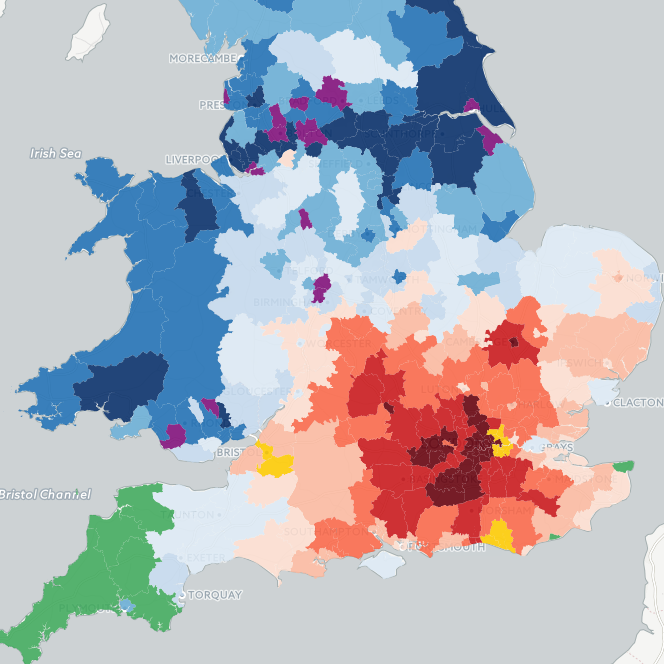 We are in a unique housing market: never before has the acceleration of house prices at the top of the scale left so many so far behind.

Prices in Hackney, east London, for example, have increased by a staggering 939 per cent between 1995 and 2015. Compare that to Blackpool, where that number is 100 per cent.

Savills has mapped the last 20 years of the housing market and categorized every area by its performance over the various cycles. It identifies which areas are star performers, leading the market, lagging behind, or stagnating. It also illustrates just how diverse the property market really is.

Stars: areas that have consistently performed strongly in the past 20 years, irrespective of the point in the cycle.

Upgraders: markets which performed very strongly 2000-05 but did not see high levels of price growth during other periods of the leading cycle.

Leaders: showed the strongest growth in the first half of the cycle, bounced back quickly after the 2007-08 downturn, and brought similar markets with them as the ripple effect spread.

Laggers: markets, typically in the North, the Midlands and Wales, which have been slower to react, and so see price growth later in the cycle, as long as the underlying economic conditions are right.

Stagnators: these areas have barely reacted at all in 20 years.

A housing cycle can be defined as one that starts with price rises and ends with the last areas seeing a slowdown or downturn.

Lucian Cook, director of residential research at Savills, says this polarisation at the top of the market is unprecedented. “Some of these leading markets in London are pulling away far more than they have ever done before, and the ripple effect has taken much longer to gain strength.

“That means there is a big price gap between London and the markets farther afield, which have historically moved closely in line with the capital.”

This is the first time that Savills has carried out research on the past 20 years of the housing market in such geographical detail. It identifies which areas are star performers, leading the market, lagging behind, or stagnating. It also illustrates just how diverse the property market really is.

Will these lagging markets catch up? “It really depends on what the economic conditions are like when they normally reach that part of the cycle, such as interest rates and mortgage restrictions,” says Cook.

London’s dominance within the housing market is fuelled by its position as a world economic powerhouse. But other trends, such as a shift to city living and a reluctance to move out into the commuter belt, have put cities such as Bristol, Brighton and Bath firmly in the “stars” category, which continues to outpace much of London’s hinterland – for now.

Seven of the 11 stars of the UK housing market are in London, areas that 20 years ago were largely forgotten boroughs. Since then they have zoomed up the rankings as they gentrified.

Hackney was originally hailed for its value for money, which brought waves of people, and “a significant regeneration”, says Edward Taylor, sales manager of Foxtons in Hackney. He claims that it remains “well priced”, while formerly gritty areas, such as Clapton, are having huge price rises.

I think London slows from here. The city has reached the point where the market is becoming more confined to the affluent buyers onlyLucian Cook

“Well Street in E9, which was a ‘down at heel’ former market street, now has a selection of new cafés, bars and an organic pizza restaurant,” he says. “Many of the less aesthetically pleasing parts of the borough have been revamped.”

Lewisham, in south-east London, is attracting not just those looking for more space for their cash, but also investors and developers, such as Barratt Homes. Part of the appeal is the area’s excellent transport links into the centre, and it shares that with other London boroughs in the “stars” category, such as Greenwich.

There are signs of slowing in luxury areas of London, particularly in the west and south west, with estate agency Stirling Ackroyd reporting that the top quarter of postcodes has had falls of 2.4pc in the past year.

That correction may spread to the whole city: Capital Economics has predicted that house prices will slow to 0 per cent by the end of this year.

“I think London slows from here,” says Cook. “The city has reached the point where the market is becoming more confined to the affluent buyers only.” If prices fall here, it may signal a change in the cycle – and point to an uptick in prices among the laggers.

Other “stars” outside London have markets that behave much like the capital’s – but are not as subject to its volatility. Brighton is a key beneficiary of the ripple effect from London, with many commuters opting for the sunny seaside town. “There is also a strong local base of applicants, first-time buyers and second-time movers,” says Dominic Ruzyllo, of Fox & Sons.

Brighton recovered quickly from the dip after 2008, and has had big price rises since then. “I can’t see a downturn because of the sheer demand – it’s buzzing,” says Ruzyllo. House prices increased by 10 per cent last year. Lewes, another South Downs star, has had consistent growth in prices, even when similar markets have lulled.

One of the reasons was its swift recovery after the downturn: according to Tom Coffey, of Fox & Sons, while Lewes returned to its 2007 peak in early 2010, nearby Eastbourne has only recently bounced back.

It sits nestled in the South Downs, and is a smaller outlier among the stars outside London, which also include Bristol and Bath. “Local Lewesian folk still term it as a village, and as a community, you know a lot of people,” says Coffey.

With village life just an hour’s commute from London, Lewes has held up its house price growth more consistently than similar commuter belt towns and, crucially, is much cheaper: a comparable commuter area in Surrey, such as Waverley, has an average house price of £496,000, while Lewes is a far more affordable £319,000.

One city that has had sustained house price growth over the past 20 years is Bristol. As transport links sped up for commuters into London, it also developed its own tech scene and high-value jobs market. It is now hugely popular, with house prices rising 12 per cent last year.

The stagnators and laggers

These are “the forgotten housing markets of the wider UK”, according to Cook. Here, price inflation has remained low, or negative, even during periods when other lagging markets did well. They are also the last areas to feel the ripple effect from bigger, successful cities.

These areas include Burnley, Bolton, Blackpool, Blackburn, Blaenau Gwent in Wales, and Barnsley – “anywhere that begins with a ‘B’ ”, jokes Cook. These areas share high levels of poverty: Oldham is the most deprived town in the UK, according to the Office for National Statistics.

Burnley has the cheapest house prices in the country, at £78,000. Areas in the North have yet to feel the full ripple effect from the big cities, but may do so soon as prices in Manchester begin to tick up and affordability is crunched. Last year, prices there went up by seven per cent, compared with the 10 years previously when they increased by a total of 11 per cent.

Graham Davidson, head of Sequre Property Investment, a buy-to-let property adviser, says the announcement of HS3 has boosted the area and will help ensure the ripple effect spreads. It has already reached areas such as Salford Quays, two miles outside Manchester, but has yet to reach Oldham, despite its good tram links that provide a 30 minute commute into the city centre.

The stagnators and laggers of the cycle may be on the cusp of change. Gareth Welsh, head of Hunters in Blackpool, said: “The property market has been stagnant in Blackpool for a number of years. However, houses are now selling much closer to the asking price, which suggests we could very soon see a shift in house prices.”

Prices there fell 14 per cent 2005-15, and average £109,000. Blackpool has a diverse range of properties, with anything from Storth Cottage, to two-up two-down homes. Many lagging areas are top choices for investors because although they don’t provide a big capital return, the rental yields are high and the entry point is low.

A recent study from HSBC placed Blackpool third in a list of the best places to invest in property in the country.  In these areas there has not been the same lull after the stamp duty hike. As Mark Hadley, head of Hunters in Oldham, says: “Three per cent on a £70,000 property is not much.”

Oldham is close to rugged countryside, and there are pretty villages in areas such as Saddleworth, where houses can go for £1million. Oldham itself may also be on the up: “There’s lots of money and regeneration going into the town, and it’s helping,” says Hadley.

In the past six to 12 months there has been a real appetite for Liverpool and a real change. It is now clinging to the shirttails of Manchester, and doing a good job of itGraham Davidson

Another area doing well is Liverpool. “I’m surprised it has been identified as somewhere lagging behind,” says Davidson. However, unlike Manchester, it does not have the high-value employment market to keep its graduates.

In addition, the city has been slower to attract investment, he says. “Manchester has been great at it since the recession, and it has stolen the march on them. Liverpool has now woken up to that.” Derelict buildings that line the city centre waterfront are being snapped up and turned into chic flats, transforming it into a booming investment spot.

Efforts to regenerate ‘down at heel’ areas are abound: Toxteth, once famous for riots, is now known for its sales of houses for £1 that are then refurbished by their new owners. House prices here increased five per cent in 2015, and fell a total of six per cent 2005-15, suffering badly in the downturn. The average house price in the city is £143,000.

“In the past six to 12 months there has been a real appetite for Liverpool and a real change,” says Davidson. “It is now clinging to the shirttails of Manchester, and doing a good job of it.”