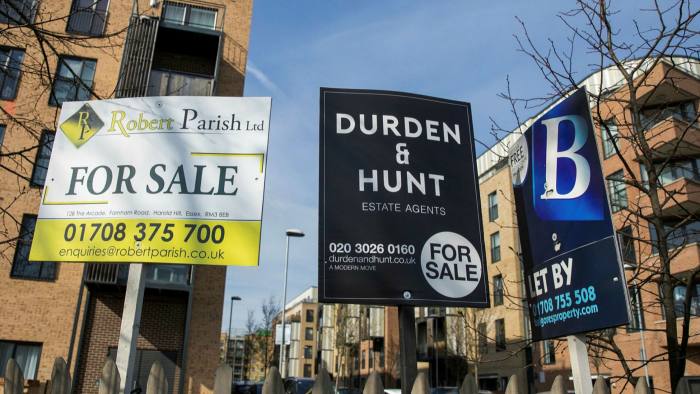 The UK housing market has come to a sudden halt, with sales expectations dropping to their lowest level in more than 20 years after estate agents closed their doors in the nationwide coronavirus lockdown.

The score for sales expectations in the next three months dropped to minus 92, the lowest figure since the survey began in 1998 — down from 26 in February, according to the Royal Institution of Chartered Surveyors’ monthly survey of the residential housing market, published on Thursday.

The pandemic has hit the market just as it was starting to recover from the slowdown that followed the UK’s referendum to leave the EU in 2016. While the coronavirus outbreak is considered temporary, surveyors’ expectations for the year ahead deteriorated sharply, suggesting “that the legacy of Covid-19 could be such that any return to what might be described as normality in the economy will take time”, said Simon Rubinsohn, RICS chief economist.

The impact of the crisis is being felt across the sector. In March RICS’ index of properties for sale fell to minus 72, while indices for demand and sales fell to minus 74 and minus 69 respectively.

The indices are calculated by subtracting the proportion of surveyors reporting a deterioration from those reporting an improvement. 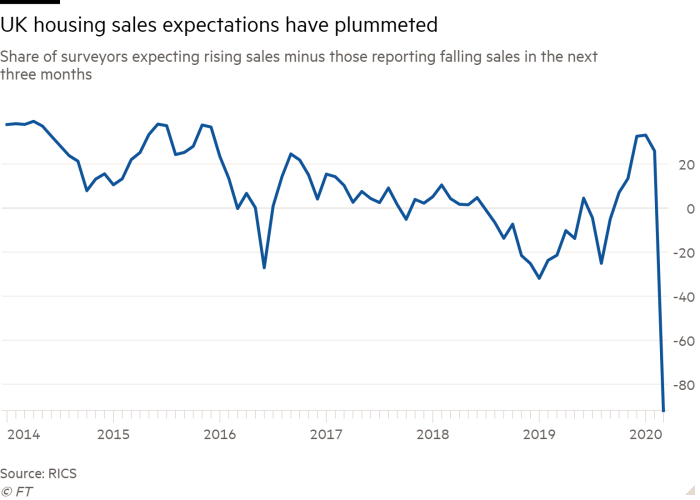 With a substantial rise in unemployment expected, and its impact on many people’s incomes, “the housing market looks unlikely to return to the levels seen at the start of 2020 for some time”, said Howard Archer, chief economic adviser to the EY Item Club.

The slump in activity is expected to damp prices with the surveyors’ near-term price expectation index dropping to minus 82 in March from 21 in February.

Hew Edgar, RICS head of government relations, said ministers “will need to start considering medium and long-term measures that could assist a post-pandemic housing market”, such as a stamp duty holiday.

The RICS data was released as the Resolution Foundation, a think-tank, published its own housing outlook, which warned a significant number of renters could build up rent arrears, despite the housing government support.

The study found private renters face the highest housing costs relative to income in the UK and they are more at risk of losing their jobs than mortgage holders or social renters.

Although the government has announced a £1bn boost to housing benefits, many families could be left with a shortfall in support because of a cap that restricts the total benefits that can be paid out.

Lindsay Judge, the principal research analyst at the Resolution Foundation, said the government “can help address private renters’ housing pressures by suspending the benefit cap, and extending the grace period landlords must give tenants building up arrears before they can be given notice to leave”.