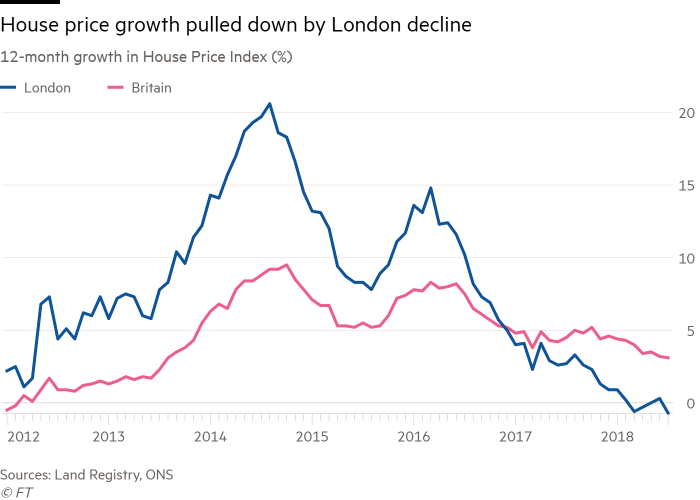 In the capital, prices fell 1.2 per cent in the year to April – more than any other UK region but less than half the 2.5 per cent annual fall recorded in March.

Outside London and southeast England, a number of regions have experienced strong growth, with Wales leading the way, registering a 6.7 per cent rise in average house prices to £164,000.

Across the whole of England prices rose 1.1 per cent, down slightly from 1.3 per cent in March. The average house in England cost £245,000 in April.

Northern Ireland’s house prices increased by 3.5 per cent during the first quarter of the year (January to March). Northern Ireland remains the cheapest UK country to purchase a property, with the average house price at £135,000.

At UK level, a 0.7 per cent jump between March and April was not enough to stop the annual growth rate from falling. Seasonally adjusted prices fell 0.2 per cent, month to month.

Over the past three years, there has been a general slowdown in UK house price growth, driven mainly by a slowdown in the south and east of England, which has been hit harder by changes to the tax system.

“The stagnation coincides with the drop in consumers’ confidence when it became clear that the Brexit deal was unlikely to pass through parliament, increasing the risk both of a no-deal Brexit and a general election, which might install a Corbyn government,” said Samuel Tombs, chief UK economist at Pantheon Macroeconomics.

However, he predicted that rising wages and falling mortgage costs would lead to a pickup in house prices during the second half of the year.