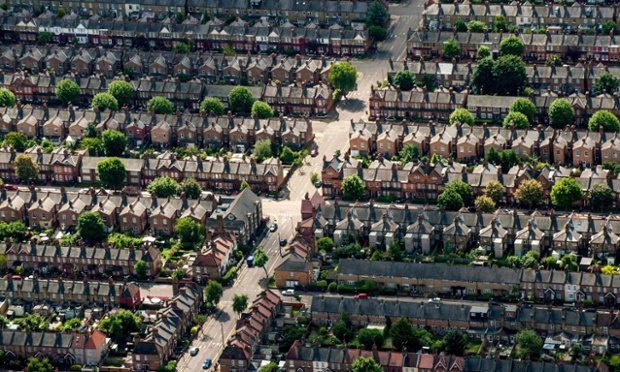 File photo dated 12/07/12 of an aerial view of houses on residential streets in Muswell Hill, north London, as more than 4,000 households across England are at risk of losing their home every week through an eviction or repossession, according to research by Shelter. PRESS ASSOCIATION Photo. Issue date: Wednesday May 21, 2014. The housing charity also revealed the hotspots across the country where people are most likely to face losing their home. Newham in London topped the list, with one in every 34 homes there at risk of a possession claim. Shelter said its research found that London boroughs – where affordable housing is in particularly short supply – dominate the hotspot list, with Barking and Dagenham, Southwark and Hackney also featuring highly. See PA story MONEY Repossession. Photo credit should read: Dominic Lipinski/PA Wire

There was an unseasonal fall in the asking prices of homes coming on to the market in May, but the surprise outright election win for the Conservatives could remove the brakes from the housing market, according to property website Rightmove.

Uncertainty at the start of the month over the outcome of the vote forced sellers to price properties “more aggressively”, Rightmove said, leading to a 0.1% fall in the average asked by new sellers entering the market in May. Across England and Wales, the average asking price fell by £242 to £285,891.

This is the first May in five years that sellers have come on to the market with lower prices than in April, but Rightmove suggested the pause in rising prices may only give short-term relief to would-be buyers.

“This is an election-driven price stall which gives some buyers only short-term relief from the backdrop of a long-term housing shortage, and many estate agents are now reporting a resurgence in interest following the surprise election result,” said Rightmove’s commercial director, Miles Shipside.

“Election uncertainty, and particularly the threats of financial penalties to landlords and those with properties valued at over £2m, put a brake on the market, and their removal gives a reason for a rebound in activity and prices.”

The biggest fall in prices was in Greater London, where a mansion tax and measures to tackle overseas investors were most likely to have an impact on the market. Asking prices in the capital fell by 2.3%, or more than £13,000, during the month, to an average of £581,074. Prices in the north-east and Yorkshire & Humberside also dropped during the month.

In contrast, in the east of England, asking prices increased by 1.4% to an average of £303,763, and there were rises of 1% and more across the rest of the south of England and in Wales.

Now the election is out of the way, more sellers are likely to put their homes up for sale. Rightmove looked at new-seller data for the three months following the 2010 general election and found a 17% increase in the number of homes coming on to the market. It said it expected another surge in supply now that a majority government was in place, which could be welcome news to buyers who have seen competition for homes for sale drive up prices.

“In a traditional tight-stock market, an increase in supply of available property and greater competition among sellers to attract buyers may moderate their price expectations and make them more open to an offer,” said Shipside. “There may be a window for buyers to act now in this late spring market before prices rise in the next few months.”

Immediately after the election, estate agents marketing expensive London properties reported a rush of interest from buyers keen to secure deals before prices started to increase. Some predicted prices at the top end of the market could increase by as much as 20% as the threat of a mansion tax on homes worth £2m or more receded, while other commentators suggested price rises would be focused outside London.

The Royal Institution of Chartered Surveyors has warned that a lack of homes coming on to the market will push up prices and urged the new government to act to increase the numbers of properties being built.