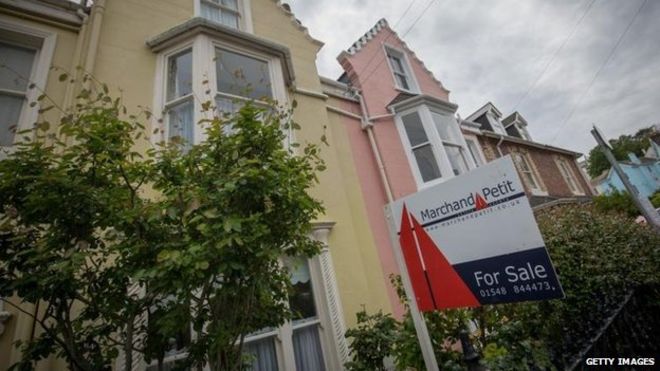 Nearly four out of 10 homes were sold without the need for a mortgage in the first quarter of the year – a record high, the Nationwide has said.
The building society – the UK’s second biggest mortgage lender – said that 38% of properties were sold to cash buyers.It said that low interest rates had encouraged investment in bricks and mortar, while mortgage lending had been squeezed in recent years by the banks.It also said that UK house prices in May were 4.6% higher than a year ago.This was a slowdown from the 5.2% annual rate of increase recorded in April.

Nationwide said this marked a resumption of a “gradual downward trend” in annual price growth which had begun last summer.

However, prices in May were up 0.3% compared with April, taking the average price of a property to £195,166.
House price calculator.The proportion of cash transactions – without the need for a mortgage – leapt in the immediate aftermath of the financial crisis, based on Nationwide’s own data.
Tighter credit conditions and unemployment drove the increase at this time, according to Robert Gardner, chief economist at the Nationwide. These elements would not have had the same effect on cash transactions.
Last year, the average proportion of cash buyers was 36%, which then moved up to the new record level of 38% in the first quarter of this year.
Figures published by the Bank of England suggests that the peak is unlikely to be extended, owing to a pick-up in mortgage lending. The number of mortgage approvals for house purchases rose to a 14-month high in April, Bank data showed on Tuesday.

“I suspect [the proportion] will fall throughout the year as lenders and borrowers adjust to, and become more familiar with, the new lending rules,” said Alex Gosling, chief executive of online estate agents HouseSimple.com.

“This realignment of buyers with lenders may well be evident in the strong mortgage approvals data issued this week by the Bank of England.”

The actual number of cash buyers, rather than the proportion, has risen slightly since 2008, but has still not reached the peak seen during the housing boom of 2007.

The highest proportion of cash buyers – nearly 50% – was in the North East of England, according to Nationwide figures from 2013. The second highest was in the South West of England. The proportion in London was only just above the national average.

Mr Gardner told the BBC that this could be explained by the fact that the cost of homes in the North East was comparatively low compared with the rest of the country.

The high level of cash transactions in the South West might be owing to a larger number of older owners, who already owned their homes outright, moving to another property – possibly smaller – without the need for a mortgage.

He said there was no evidence that pensioners were cashing in pensions to buy property, and it was certainly too early to assess whether those new rules had affected the property market.

It was also unlikely, he said, that young people were being bought homes outright by their parents as first-time buyers represented a relatively high proportion of mortgage applicants at present.

The figures come as the government said that nearly 94,000 purchases have been completed under its Help to Buy scheme, aimed to help those who can afford mortgage payments but struggle to raise a deposit.