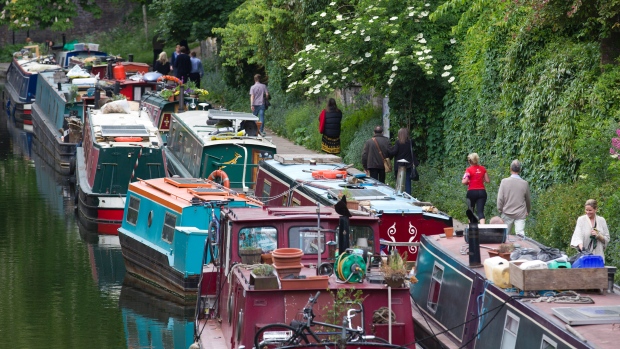 The picturesque lifestyle of sleeping in a colourfully painted narrowboat or barge can seem tempting, especially when buying one can cost a fraction of the price of bricks and mortar.

“It’s become more common for people to do it who don’t know what they are getting into, or even because they have no choice,” said education worker Jim Bryden, 39, who has lived aboard the “Violet Mae” with his girlfriend, a dog and a cat for two years.

Everyone has a story of spotting newcomers struggling with engine failure, steering ineptly along a crowded canal or developing regrets once facing a damp, cold winter on boats often heated by stove and just 2.1 metres wide.

Maintenance costs can mount quickly and boaters dryly refer to their vessels as “black holes” for cash, constantly in need of repair.

“If you are ignorant about buying a boat it can be easy to buy a boat that will become a nightmare,” said Mikaela Khan-Parrack, 26, who has lived on the water for four years and works as a mooring ranger for the Canal and River Trust (CRT).

As London private rents have increased to cost almost half the average salary, some renters have turned to cheap but illegally let rooms on boats described as mouldering “floating shacks” in an article by a former resident in the Guardian.

Yet for many, waking up with ducks swimming by the window, and the freedom and sociability of the pretty tree-lined waterways compensate for downsides like emptying toilet tanks, trudging the towpath to do laundry or fetch gas cylinders, and vulnerability to thieves.

Tension on the water

In a testament to the increasing popularity of the lifestyle, one boat entered the London waterways for every working day in the past year, with popular areas seeing an 85 per cent spike in numbers, according to the CRT.

The charity manages 3,200 kilometres of a network that spans Britain, much of it built to carry freight in the industrial revolution.

The increased numbers have caused congestion, with fierce competition for mooring spaces, queues at locks and friction with nearby residents who suddenly find themselves with a large and shifting cast of new neighbours in boats moored two or three abreast.

In one central London stretch of the Regent’s Canal, a team of boat-dwelling volunteers maintain special rules to appease nearby residents, who launched a series of complaints to authorities over boat noise and smoke disturbing their expensive terraced homes, which line the canal.

Yet an attempt by the CRT to address congestion has caused an outcry in the boating community.

Many boats have “continuous cruising” licences, which require them to move along every 14 days, rather than stay in a permanent rented mooring spot — which are in short supply and can cost the same to rent in London as an apartment.

This spring the CRT began an enforcement drive on continuous cruisers, warning it would refuse to renew licences or remove boats that it deemed did not move often or far enough along the waterways.

Almost 20,000 people signed a petition against the drive, calling on boaters to mobilise to “prevent the eviction of boat dwellers” and accusing the CRT of pushing families into homelessness.

“Like it or not, socio-political realities have made the waterways an affordable housing resource for many families,” the petition reads, accusing the CRT of a “marked hostility towards the water-based community” and targeting people with no where else to go.

CRT spokesman Joe Coggins argues that boaters must either follow the regulations, get a permanent mooring, or accept that the life might not be for them.

“More people are moving onto boats, popularity is going through the roof,” Coggins said. “Rather than looking at it as a cheap housing option we want people to see it as a lifestyle.”