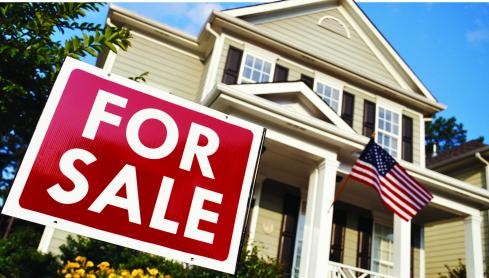 The spring home-selling season is off to a promising start in this military port city, sparking optimism here and in other cities that the market has finally gained momentum after a slow recovery and last year’s stall.

The downturn was brutal for Jacksonville; home sales sank and foreclosures were running at high levels during the crisis. But in recent months, home sales have shot up, the percentage of distressed homes on the market has declined and traffic at model homes in new subdivisions has been brisk.

Local home builders and real-estate agents report the most vibrant period of home sales since 2006. Finalized sales of existing homes in the Jacksonville area were up 18% in March from a year earlier, and pending sales were up 30% in that span, according to the Northeast Florida Association of Realtors. The spring selling season—a crucial period for sales because families typically want to lock into a school district by the end of summer—runs February to June and typically generates more sales activity than other months of the year.

“It feels like 2005 again,” said Sanford Davidson, a Redfin real-estate agent in Jacksonville, referring to the boom times. “Homes are moving that quickly, especially if they’re in the right neighborhood and priced right.”

The changes in Jacksonville reflect a national trend—and perhaps the long-awaited sustainable recovery in the housing market. Nationally, finalized sales of previously owned homes were up 4.7% in February compared with a year earlier, according to the National Association of Realtors. But in cities with robust job growth, like Jacksonville, sales gains ran in the double-digits in March, including a 17.7% increase in Seattle and 20.3% in Charlotte, N.C. 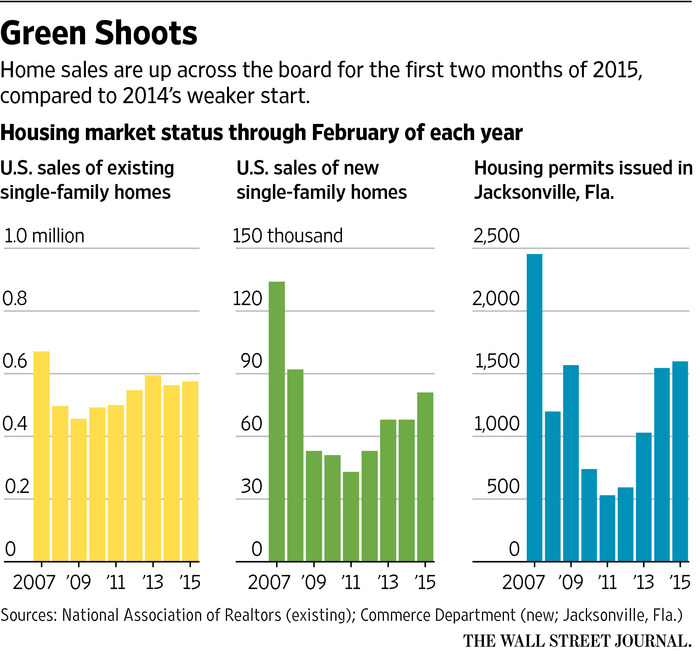 Sales could accelerate in the months ahead, according to an index produced by the Realtors association that tracks signed home-sale contracts. Nationally, the pending-home-sales index in February jumped 12% from a year earlier. In March, pending sales were up 30.6% in Houston, 27.8% in San Diego, 24.2% in Seattle and 23.7% in the Riverside and San Bernardino market in California.

There were high expectations for last year’s spring selling season, but sales never took off, in part because of weak consumer confidence, steep price increases from the previous year and a generally tepid economic recovery. Overall, sales of new and existing homes during the 2014 spring season were essentially flat.

Many economists believe this year should be different because of more sustainable, positive trends. The economy has added 3.1 million jobs in the past year, marking the strongest pace in 15 years. The Federal Housing Administration, which guarantees mortgages for first-time buyers, has moved to ease borrowing requirements and costs. In addition, many buyers who went through foreclosures, bankruptcies or short sales during the downturn now have repaired their credit enough to qualify to buy a home again. And low gas prices have helped to boost consumer confidence.

Moreover, the potential for the Federal Reserve to start tightening interest rates as early as June has prompted some buyers to take the plunge to lock in today’s low borrowing costs. Rates on 30-year, fixed-rate mortgages have been near historic lows at less than 4% since November.

“The spring home-selling season is off to a very good start,” said Thomas Lawler, a housing economist in Leesburg, Va. “I think the rest of the season is going to be materially better than a year ago.”

Sales have been so robust that certain homes are sparking bidding wars with higher offer prices or fewer conditions, something that several markets haven’t seen in many years. “On homes that are really good, you’re seeing multiple offers,” especially for homes priced around $500,000 or less, said Rich Harty, broker and owner of Harty Realty Group in the upscale Chicago suburb of Highland Park, Ill. He said he didn’t sell anything in March 2014. But this March, he oversaw four finalized home purchases and two sales contracts.

Although sales still remain well short of the peak of nearly 1.3 million new homes sold in 2005, the uptick of recent months is an early indication that “the market is continuing to improve at a very steady pace,” Lennar Corp. Chief Executive Stuart Miller said on a conference call with investors on March 19. Miami-based Lennar, the nation’s second-largest home builder by closings, posted a sales gain of 18% in the quarter ended Feb. 28, compared with a year earlier.

Los Angeles-based KB Home, which counts entry-level buyers as one of its biggest customer segments, reported a 24% gain in orders during its quarter ended Feb. 28. KB Home noted that sales were especially strong in the San Francisco Bay Area, Southern California, Las Vegas and Phoenix.

Momentum is building in Jacksonville, which is home to roughly 1.4 million people on Florida’s northeastern coast, where the same sorts of trends are playing out. During the downturn, median home prices in the metro area sank 38% to $125,000. Residential construction declined 86%, and sales of foreclosed properties mushroomed to claim 52% of the market in 2010.

Since then, resurgent job growth and a decline in distressed homes on the market have allowed Jacksonville to reclaim lost ground, though it is still short of its boom-time peaks. Median prices were $159,000 last year, up 27% from the nadir in 2011. And residential construction permits more than doubled from 2010 to last year.

Buyers such as Erica Robbins and her fiancé, Carl Jacob Segers, are jumping in the market to buy before prices rise further. The couple put a three-bedroom, single-story home in Jacksonville under contract on March 28 for $175,000. Even though the couple separately filed for bankruptcy in 2011 and Mr. Segers was foreclosed upon in 2007, they say their credit has recovered and they are preapproved for a $171,830 mortgage by Volunteer State Bank’s Guaranty Trust Wholesale.

“People are buying houses like crazy right now,” said Ms. Robbins, a 41-year-old mortgage processor. “So before prices go back up, we might as well buy again.”

Meanwhile, some local builders are working overtime to meet the demand for new homes. Jacksonville builder Providence Homes’ sales in December through March were up 20% from a year earlier. Cliff Nelson, division president for Mattamy Homes, said Mattamy sold 124 homes in the Jacksonville area in the first quarter, up from 73 a year earlier. “There is definitely more enthusiasm this year for buying,” he said.

Mattamy and other builders have focused much of their efforts on the 13,000-acre Nocatee community in St. Johns County south of Jacksonville. Eleven builders are erecting homes in the massive master-planned community, home to 3,000 houses, with room for 10,000 more priced from the mid-$200,000s to more than $1 million. On the last weekend in March, a steady stream of home shoppers from neighboring communities and farther-out locales such as Falls Church, Va., toured rows of model homes in Nocatee with their kids in tow.

Alana Narciso and her 14-year-old daughter, Chloe, visited Lennar and Mattamy model homes in late March with plans to eventually buy a three-bedroom home in the mid $200,000s. Ms. Narciso, a 36-year-old social-services director, and her husband, Anrique, a 37-year-old chef, want to leave the town home they rent in neighboring town to move their two teenage daughters to St. Johns County’s highly rated schools.

“We’re just both in a better financial position with jobs that we’ve been in for a couple of years now,” Ms. Narciso said. “We’re at a point now that we’re able to save up for the down payment.”