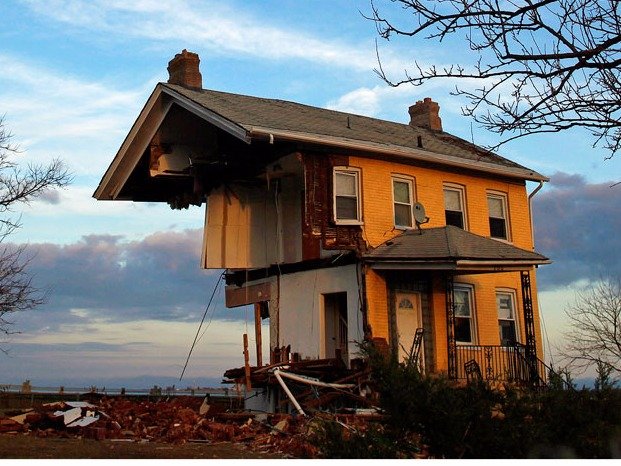 The comeback of the US housing market has been one of the most bullish themes of the post-financial-crisis era.

And for the bulls, it continues to be a bright spot in an otherwise slowing US economy in a slowing global economy.

But in a chilling 88-page industry note, Barclays analyst Stephen Kim warns that the bullish tale spun by his peers is more of a fairy tale.

“At this point, it has become hard to overlook housing’s dismally slow pace of recovery,” Kim wrote.

“And yet, over the past several months, we have become increasingly concerned about the way many analysts are portraying the industry’s current weakness as a strength,” he continued. “To us, this seems perilously Pollyannish and a risky oversimplification.”

Kim, Barclays’ US building products and home-building-equity analyst, is speaking in the context of stock recommendations for clients. But his view of the industry is sharp and one we cannot ignore.

Sure, home prices are back to historic highs and housing-market activity continues to pick up, but many important aspects of the housing market are depressed.

“The housing recovery hasn’t lived up to expectations so far; this is something about which housing bulls and bears can probably agree,” Kim said. “Indeed, 10 years after the last peak, single-family starts (which matter most for public builders) are at traditional trough levels, and total starts aren’t much better.”

Optimists interpret this as an opportunity.

But not Kim. In fact, he finds the optimists’ arguments troubling.

“Particularly alarming to us is when we hear that ‘housing has lagged’ the economy, or that housing demand is ‘slow and steady,'” wrote Kim. “Call us cynical, but last we checked, housing doesn’t lag anything — it’s a leading indicator; and just because housing is slow doesn’t make it more steady or less cyclical, it’s just slow.”

Two realities we need to come to grips with

“There are two realities that we think investors still need to come to grips with,” he said. “First, pent-up demand can stay pent up for a long time, and second, housing probably isn’t early-cycle anymore.”

To be clear, we believe pent-up demand in housing is real, but we also believe this deficit may persist for many more years. Meager wage growth, crushing levels of student debt, glacial expansion of credit, negligible support for a housing stimulus in Washington, Millennials’ cynicism towards home ownership, a looming Texas slowdown, and a shortage of construction labor have all been impeding a satisfying snap-back in housing demand thus far.

Kim goes on for nine pages illustrating these themes that are not news. If you’re behind, click any of the hyperlinks above.

“To our eyes, these challenges defy a quick fix, and are likely to keep the growth rate of housing demand constrained for the foreseeable future,” he said.

Second, the presumption that the housing recovery is still in the early stages is worrying to Kim. He says that a common question is “What are your mid-cycle [i.e., 2017] earnings estimates?” To Kim, we may already be in mid-cycle.

“It seems reasonable to think that this might be a truncated cycle — cut short by an economic recession,” wrote Kim.

This is particularly alarming as more folks are warning that we could be at the cusp of a downturn.

“By way of illustration, it’s commonly thought that housing is in the ‘early innings’ of a 9-inning ball game,” he noted. “But according to Section 4.10.c of MLB’s official rules, if your team is trailing after 5 innings and the rain sets in, the game is not postponed, it’s over — and you lose. So the real question is, ‘Are we in the third inning of a 5-inning ball game?'”

So not only is everyone getting it wrong on the housing recovery, but Kim says it may fall apart before it can even get going. In this environment, Kim likes building-products companies over home builders, and he suggests staying away from companies that depend on the housing market accelerating.