In a top 100 list that includes Shanghai, San Francisco and Monaco, Vancouver is the clear leader, with prices accelerating 24.5 per cent last year.

Sydney, ranked second, grew just 14.8 per cent in the same time period. Toronto placed at number 12, with an eight per cent rise.

U.K.-based property consultants Knight Frank’s The Wealth Reportranks cities in what they call their Prime International Residential Index (PIRI), which, they say, tracks the most sought-after property markets around the world.

They define prime property as “the most desirable, and normally most expensive, property in a defined location,” generally the top five per cent of any given market.

Vancouver’s surge is credited to a lack of supply compared to international demand, as well as the weakened Canadian dollar. 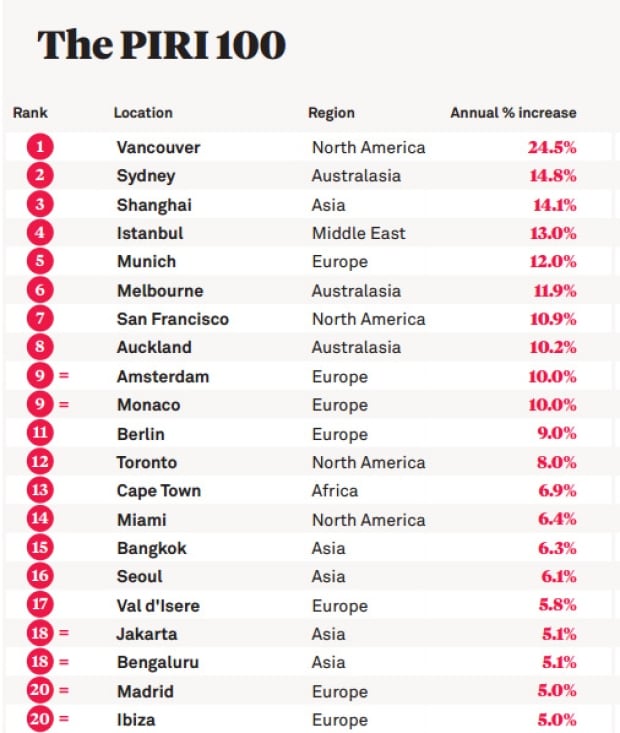 The report notes that central London did not make the top 100 list, but that its market saw a rise of one per cent last year, “despite a raft of new property taxes, many of which were aimed at foreign buyers, being introduced.”

This kind of policy pressure — rather than interest rate speculation — is expected to grow.

“There is increased attention being paid by governments on the impact rising investor demand for residential property is having on affordability in key urban markets,” Knight Frank’s global head of research, Liam Bailey, writes.

“Higher taxes, curbs on foreign investment and loan caps will continue to spread globally,” he says.

When it comes to the cities that matter most to the world’s wealthy, Vancouver is nowhere to be seen.

“There is no direct correlation between the locations where the wealthy are normally resident and the locations their advisors view as being most important to them,” Bailey writes.

“This reflects the itinerant nature of many UHNWIs [ultra high net worth individuals] who increasingly educate their children overseas while working and living in multiple international locations.”