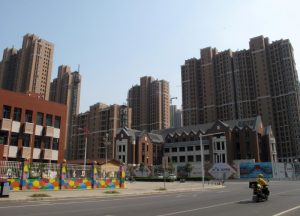 HONG KONG (Reuters) – A wave of restrictions imposed on housing markets in major Chinese cities last week have unnerved some buyers and developers, cutting the area of new homes sold in places such as Beijing and Shenzhen by more than half.

More than 20 cities have imposed measures, including higher mortgage downpayments, to cool hot property markets that have raised official alarm in Beijing and fresh concerns about China’s ballooning debt.

Last week was a public holiday to mark National Day, traditionally a high season for property sales. Property agents said prices of new homes sold in the southern city of Shenzhen and in Beijing dropped 20 percent last week to entice buyers, compared with the previous week.

“The new tightening measures are quite stringent,” said Alan Cheng, general manager of realtor Centaline Shenzhen. “It’s a blow to confidence and people are worried that prices will drop, so they are observing from the sidelines now.”

The latest restrictions varied from city to city, but included higher mortgage downpayments for second and third-time home buyers, in a bid to stem the flow of cash into the red-hot property market.

China’s home prices rose 9.2 percent in August from a year earlier, official data shows. But in Shenzhen, they increased almost 37 percent, in Beijing more than 23 percent and in Shanghai topped 30 percent. Such hefty price rises have been common all year in these so-called Tier 1 cities.

The rally has prompted a frenzy among some buyers. In some cases, couples divorced to find a way around buying restrictions.

Despite signs of caution among buyers and developers last week, agents said it was too early to tell if the tightening measures would reverse the rally across many of China’s major cities. Credit remains loose and demand was still high, they said.

Instead, buyers and developers were probably pausing to see the impact of the flurry of tightening measures, which occurred as central bank Governor Zhou Xiaochuan warned that the government was “paying close attention” to rising property prices in some cities, they said.

Earlier on Tuesday, Premier Li Keqiang said the government will ensure a stable development of the property market.

Local governments, such as Shenzhen, also rejected permission for some new launches if they considered offer prices were too high, these agents said.

Beijing and Wuxi, a city near Shanghai, had no new launches last week, a survey of 10 major cities by property researcher CREIS showed. But the area of residential space sold, based on developments launched previously, plunged 86 percent and 72 percent, respectively, compared to the previous week.

CREIS said cities including Shanghai, Hangzhou and Wuhan, launched new developments but the area put on the market declined more than 50 percent and the area sold dropped 35 percent to 60 percent.

The eastern city of Qingdao was an exception, the CREIS survey showed. The amount of residential space sold climbed 23 percent from the previous week.

In Shenzhen, a development called “Mountain & Sea” went to the market on Sunday and was the first new launch since the tightening measures last week.

According to data provided by realtor Hopefluent <0733.HK> Real Properties (China), 62 percent of the 548 flats had been sold. But Andy Lin, Hopefluent’s market research director, suggested that was not necessarily good news for the development.

He said Shenzhen had gained the most attention nationwide for its stringent measures to cool the market.

“So projects can’t be selling too well. It’s a political task for the Shenzhen government to suppress home prices,” Lin said.