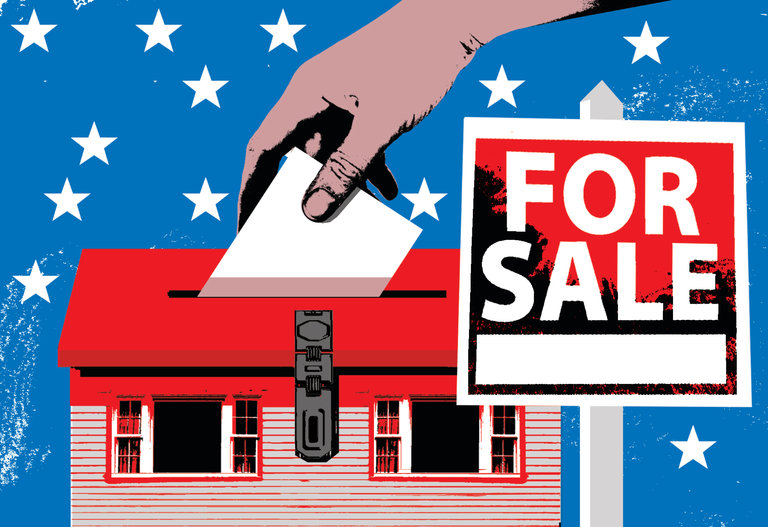 Two months ago, Pierre E. Debbas, a partner at the boutique law firm Romer Debbas, was representing a couple buying a Manhattancondominium who wanted the option to back out of the deal if Donald J. Trump won the election. After Mr. Debbas explained that no seller would agree to such a contingency, they signed the contract and took their chances.

Other buyers and sellers have been skittish, too. By the morning after Mr. Trump’s upset victory, nerves were downright frayed, with buyers canceling viewings and delaying contracts, saying they needed to reassess, according to brokers, lawyers and developers.

“People don’t know what to make of the new situation,” said Stephen G. Kliegerman, the president of Halstead Property Development Marketing. “They don’t know if this is going to have a positive or negative effect on the economy.”

But even a few days can make a difference. By the end of the week, potential buyers were rescheduling appointments they had canceled on Wednesday, Mr. Kliegerman said. Others who had spent the summer cautiously eyeing apartments were finally signing contracts, relieved that the election was over. “The phone has been ringing a lot this week,” Mr. Debbas said. “People are realizing that the world’s not ending.”

And as for the clients who wanted a way out of their contract if Mr. Trump won, they are “going to proceed despite the election,” he said.

Mr. Trump’s candidacy divided the real estate industry, with the city’s dominant real estate families taking opposing sides. For example, Stephen M. Ross, the chairman of the Related Companies, said of Mr. Trump, “I don’t really see him as president of the United States,” while Steven Roth, the chairman of Vornado Realty Trust, advised his campaign. But now that Mr. Trump has emerged as the victor, some real estate executives are voicing their enthusiasm for an administration that they hope will be friendly to business.

“A lot of people want to jump on the winner’s bandwagon,” said Pamela Liebman, the president of the Corcoran Group. William C. Rudin, the chief executive of Rudin Management, supported Hillary Clinton’s candidacy, but a week after the election, he said: “I’m looking forward, not backwards.”

A Trump victory will likely improve the fortunes of some New Yorkers. Proposed tax breaks aimed at the wealthiest Americans could reinvigorate a flagging luxury housing market, looser government regulations could benefit business and infrastructure improvements could spur job growth.

Affordable housing advocates, however, worry that the most vulnerable Americans could suffer under policies that could be hostile to housing subsidies and fair housing rules. It’s also unclear what effect the policies of the new administration might have on foreign buyers. While Russians might feel welcome, given the admiration Mr. Trump has expressed toward that country’s president, protectionist policies and rhetoric could have a chilling affect on investors from China and Arab nations.

Predicting what might come in the years ahead is a little like reading tea leaves. Here are some of the postelection thoughts percolating in the real estate community.

Mr. Trump is more of a branding expert and reality television star than a traditional real estate developer, yet he knows the industry, as does his son-in-law and close adviser, Jared Kushner.

So some developers are optimistic about having one of their own at 1600 Pennsylvania Avenue. “There is someone in the White House who at least understands the challenges of the development community,” said John H. Banks III, the president of the Real Estate Board of New York. “It could just be a very positive opportunity.”

Mr. Trump promises to not only cut taxes and regulations, but also to invest in infrastructure and jobs, a potential boon for business. “Once you start creating jobs, development follows,” Mr. Rudin said.

The stock market plunged on election night but recovered the next day, a sign that investors are confident in the future, business leaders said. “When you get behind all the babble and all the buffoonery, you have to ask yourself, what are his instincts and what is he about?” said Joshua Stein, a commercial real estate lawyer. Mr. Trump’s business instincts “are probably good for the economy and good for real estate.”

Wealthy Americans can expect deep tax cuts from the Trump administration, “and they buy luxury apartments,” said Jonathan J. Miller, the president of the real estate appraisal firm Miller Samuel. Such a shopping spree could reduce the glut of luxury apartments languishing on the market, but other changes to the housing market are on the horizon.

If Mr. Trump dismantles the Dodd-Frank financial reforms enacted after the subprime mortgage crisis, home buyers could find it easier to get a mortgage. But a lack of oversight could have other consequences. “Maybe we’ll have another 2008,” Mr. Miller said, referring to the financial crisis. “Human beings have a tragic flaw, we tend to screw things up over time.”

Republican lawmakers have been pushing to privatize or even eliminate Fannie Mae and Freddie Mac, the government-controlled mortgage giants. Either Fannie or Freddie backs most American mortgages, making it easier for less affluent families to buy homes. Changes to how those companies operate “might adversely affect those that have been underserved by the mortgage market,” said Ralph B. McLaughlin, the chief economist for Trulia.

And interest rates could fluctuate. “Rates are likely to be quite volatile,” Mr. McLaughlin said. “It’s likely to be a day-to-day, week-to-week phenomenon driven by statements that the administration makes.”

Affordable housing advocates worry that Mr. Trump’s policies could endanger federal programs like Section 8 housing vouchers or legal services that help the poorest Americans find and keep housing. “We have millions of people who rely on federal support for housing,” said Harvey Epstein, the director of the community development project at the Urban Justice Center.

The Fair Housing Act, which protects people from discrimination, is also vulnerable, say housing advocates. Mr. Trump’s management company was sued by the Justice Department in 1973 for discriminating against minorities. “Enforcement of that is discretionary,” said Samuel J. Himmelstein, a lawyer who represents tenants. “They don’t have to go after people” who violate the statute.

The future of the Department of Housing and Urban Development is also in question. Among the names floated to lead the agency is Westchester County Executive Robert P. Astorino, who has sparred with the agency in the past. “If they got rid of HUD, that would be a catastrophic event,” Mr. Epstein said.

By 3 a.m. on Nov. 9, text messages from Russia were arriving on Edward Mermelstein’s cellphone, as the world realized Mr. Trump had won. Mr. Mermelstein, an international real estate lawyer, fielded jubilant calls from Russian clients hopeful that Mr. Trump’s victory would improve ties between their country and the United states. His Chinese clients, though, expressed concern about the prospect of a protectionist American administration. “It’s hard to tell what it’s going to look like a year from now,” Mr. Mermelstein said.

Mr. Trump’s calls for mass deportations of undocumented immigrants and barring Muslims could harm the housing market, too, if foreigners no longer see the United States as a welcoming destination. “The housing market relies on housing formation,” said Mr. McLaughlin of Trulia. “And a portion of that relies on new immigrants.”

Developers, however, are confident that foreign investors will continue to see the New York market as a safe haven. “I have not seen or heard any nervousness or skittishness from foreign buyers,” said Ms. Liebman of Corcoran.

But if investors no longer see the United States as a safe bet, they might sink their money elsewhere. “It’s not about economic factors, it’s about safety,” Mr. Kliegerman of Halstead said. “If they see civil disobedience, fine; if they see civil unrest, those buyers will pull back.”