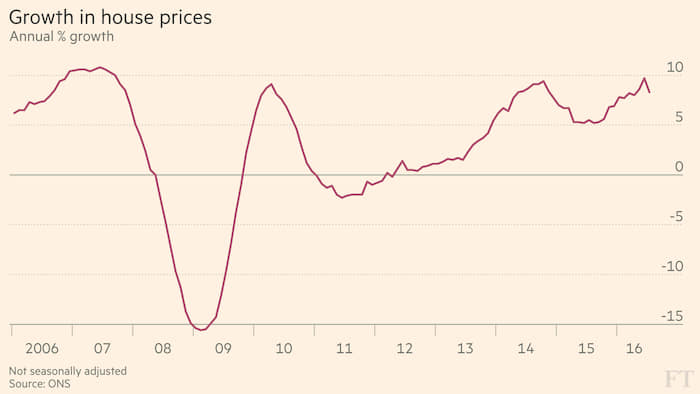 What does this chart show?

London price growth stayed high at 12.3 per cent, while prices in the south-east rose 11.9 per cent a year and the east of England by 13.2 per cent. Yorkshire and Humber showed the slowest regional growth, but even that grew 4.7 per cent.

So, is it the usual story: strong growth in the south of England and moderate rises elsewhere?

On the whole, yes, but this batch of data has attracted a lot more attention because it is the first month’s data from the Office for National Statistics since the UK’s EU referendum at the end of June.

Before the vote, the Treasury had warned of house price falls of between 10 and 18 per cent in the event of Brexit. In July, though, the price of a house rose an average £1,000 to £217,000. The ONS data support evidence from other indices and surveys suggesting the impact of the vote on the housing market has been more muted than many feared.

Not everywhere in the UK saw growth, though. The index, which also looks at house prices by local authority district, found the worst-performing area was the city of Aberdeen, where house prices dropped 6.9 per cent over the year to July. Prices in the Scottish city saw rampant growth when the oil price was high, but have declined sharply since its precipitous fall.

On the whole, it sounds like business as usual after the Brexit vote, then?

Not so fast. Some property experts say it is way too early to dismiss the impact of Brexit amid an uncertain outlook for the economy. Jonathan Hopper, managing director of Garrington Property Finders, said: “The property market’s fundamentals are far from normal; with both demand and supply falling, the result is a benign limbo that is driving up prices even as the number of sales falls. On the front line we’re seeing strong intent, but a lack of market clarity is disconcerting for buyers.”

Andrew McPhillips, chief economist at Yorkshire Building Society, said the drop in the annualised rate showed people were postponing their house purchases until the economic picture was clearer. “We expect the market to be volatile in the medium term, as any dips in house prices could be swiftly followed by an increase as prospective buyers look to make the most of lower prices,” he said.

London’s double-digit growth also masks declines in prices — and particularly in transactions — at the top end, according to estate agents and buying agents. LonRes, a data provider, found sales between £2m and £7m fell 47 per cent in the three months to June compared with the same period in 2015.

What does the mortgage market say?

Lending figures for July released on Thursday (loan advances, not mortgage approvals) suggested a less sanguine reaction among borrowers. Compared with June, lending for the month was down 13 per cent for homeowners and 19 per cent for first-time buyers.

The Council of Mortgage Lenders, which produced the figures, said it was impossible to tell how much of the fall was due to Brexit uncertainty or the continuation of conditions in an already cooling market, and added it would be “quite some time” before a proper assessment could be made. On the other hand, remortgage activity did well, rising 7 per cent on its June total and a fifth higher than a year ago. James Pickford